Cheese of the Dead, in this remote Swiss town, residents spent a lifetime aging a wheel for their own funeral. 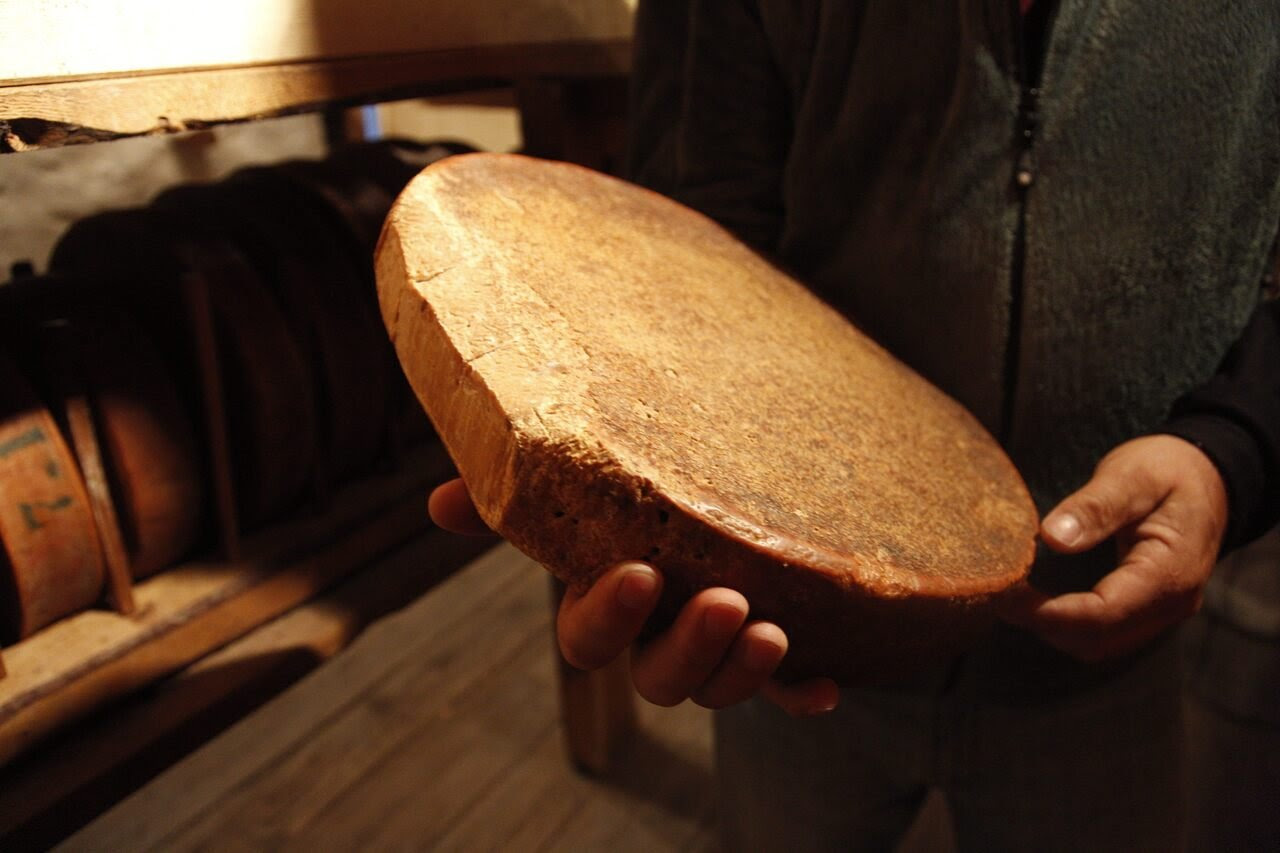 This wheel of cheese was likely a lot larger 149 years ago, but has shriveled due to moisture loss. All photos by Molly McDonough.

Imagine setting aside a wheel of cheese at your wedding. What would it look like if it were served at your funeral?

If you were lucky, it would look like one of the wheels in Jean-Jacques Zufferey’s basement in Grimentz, Switzerland: shriveled and brown, pockmarked from decades of mite and mouse nibbles, and hard as a rock. You’d need an axe to slice it open and strong booze to wash it down. This is the rare cheese you don’t want to cut into when it’s aged to perfection. A fossilized funeral cheese means you lived a long life.

Zufferey’s home, high in the Swiss mountains of Val d’Anniviers, is one of the last places you’ll find evidence of this peculiar practice—of keeping a wheel of cheese to be eaten at your funeral.

The Val d’Anniviers, which snakes up the highest peaks of the Swiss Alps, is a case study in how mountains isolate valleys and villages, breeding unique traditions. When Swiss anthropologist Yvonne Preiswerk first arrived to conduct fieldwork here, she noted strange funeral rituals reminiscent of ancient Egypt. 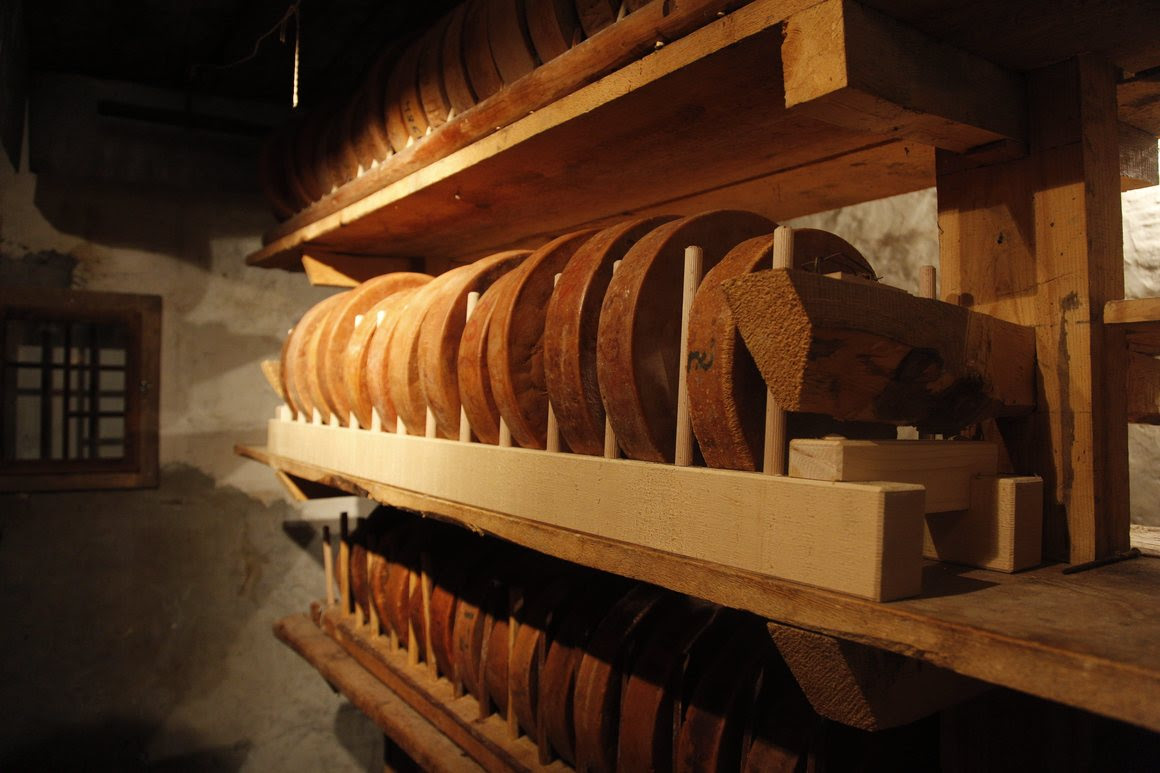 Old wheels are stacked on their sides. Since they’re completely firm, they won’t lose their shape.

“We are struck by … a special kind of mountain Catholicism,” she wrote in the 1992 paper “Death, the Priest, the Woman and the Cow: Chronicle of Research in the Village.” In centuries previous, she explained, visitors appalled by these pagan practices had labeled the locals “barbaric,” positing that they’d descended from the Huns.

The rituals that shocked them involved a mix of death and cheese. It seems an unlikely pairing, but the landscape offers an explanation. Along the valley’s winding road to the small mountain village of Grimentz, isolated villages cling to the cliffs in the shadows of craggy, glaciated peaks. The ground is rocky and steep. Growing seasons are short and winters are long. To survive the cold, villagers had to preserve nutrient-dense food.

That’s why residents of Grimentz, like people elsewhere in the Alps, breed bovines adapted to the steep landscape, bringing them to high pasture in summer to graze. Pooling abundant summer milk, they make giant wheels of cheese.

To render the wheels sturdy, cheesemakers “cook” the curds to firm them, and press them to expel as much whey as possible. Moisture and heat cause spoilage, speeding up a cheese’s aging process; in the dry, cold mountain air, these cheeses age slowly. While aging can continue for years, most Alpine wheels tend to reach peak ripeness—still pliable, but with plenty of flavor—months later, during the worst of winter when, historically, little else was available. Sliced onto rye bread or melted fireside, cheese ensured a calorie source in winter.

Devotion to dairy has taken different forms throughout the Alps’s secluded valleys. “A popular culture of the cow … traverses all moments, objects, and events of the mountain peasant,” wrote Preiswerk. In Grimentz, it manifested in elaborate funerals. After a death, the bells of the deceased’s cows were removed, so that the animals, too, could mourn. Families added a “picnic of the dead” to the casket, which included a bottle of wine, bread, and cheese (as well as sturdy boots, as ghosts were rumored to wander the glaciers after dark).

The same foods comprised the all-important burial meal, which symbolized the reconstitution of the community after its tragic rift. As one of Preiswerk’s interview subjects recounted, the funeral guests were told, “Come to the meal, because the dead man has left enough.”

In a historically poor area, “leaving enough” required advance planning. “There was the ‘cheese of the dead,’” explains Zufferey. “Everyone had a wheel of cheese so that they had something to serve at their funeral.” When the inevitable time came, the chiseled cheese was washed down with vin des glaciers, the local wine. 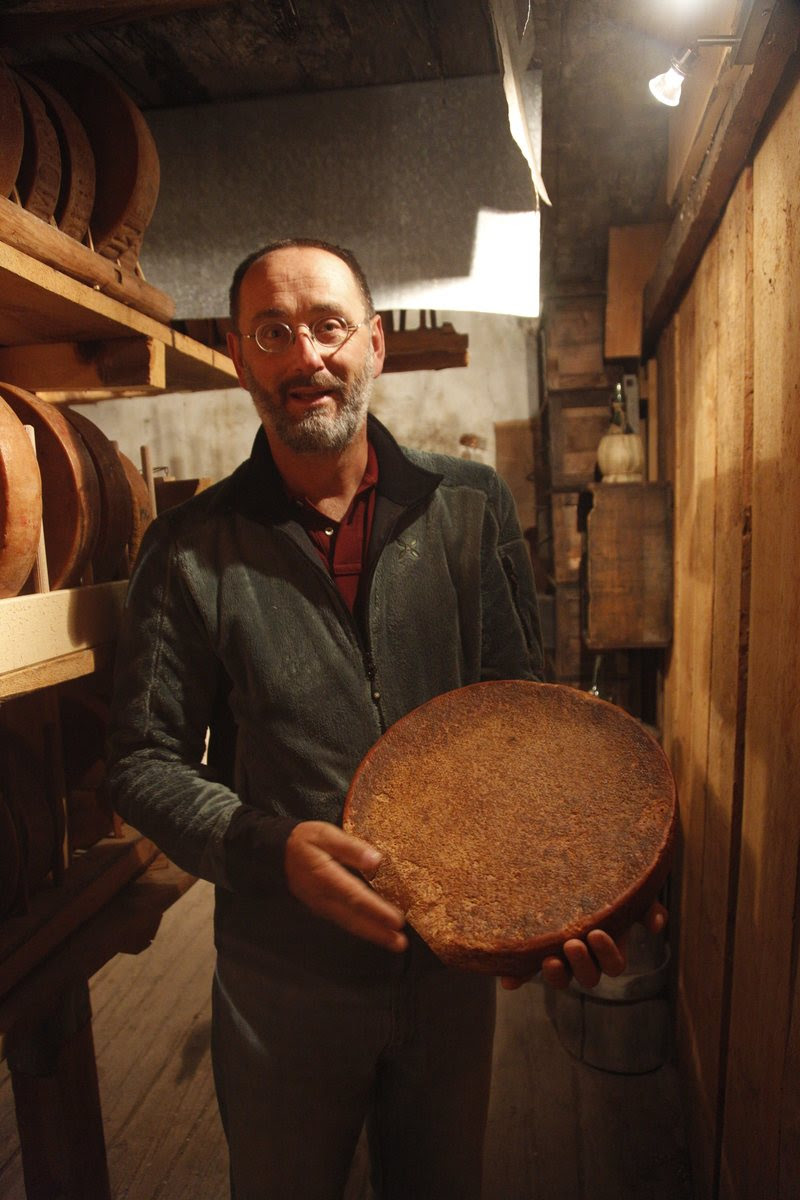 As the Valaisan Alps modernized during the 1900s, and villages moved away from subsistence economies, fears of cheeseless funeral tables waned. According to anthropologist Claude-Alexandre Fournier, families gradually stopped overseeing funeral rituals at home. “Mortuary knowledge was no longer transmitted,” he wrote in the 2013 ethnography Odette Fournier, Sage-Femme, “thus depriving families of the ‘death equipment box.’” Yet in a few basements scattered throughout the valley, you’ll still find carefully stacked wheels of funeral cheese.

In Grimentz, Zufferey, a tall, soft-spoken man with tiny glasses and a day job at the local department of agriculture, unlocks his basement door, releasing an ammoniated, musty smell. His family, too, had forgotten about their funeral cheeses, until his grandmother died in 1944. That’s when Zufferey’s father found two very old wheels in her basement. 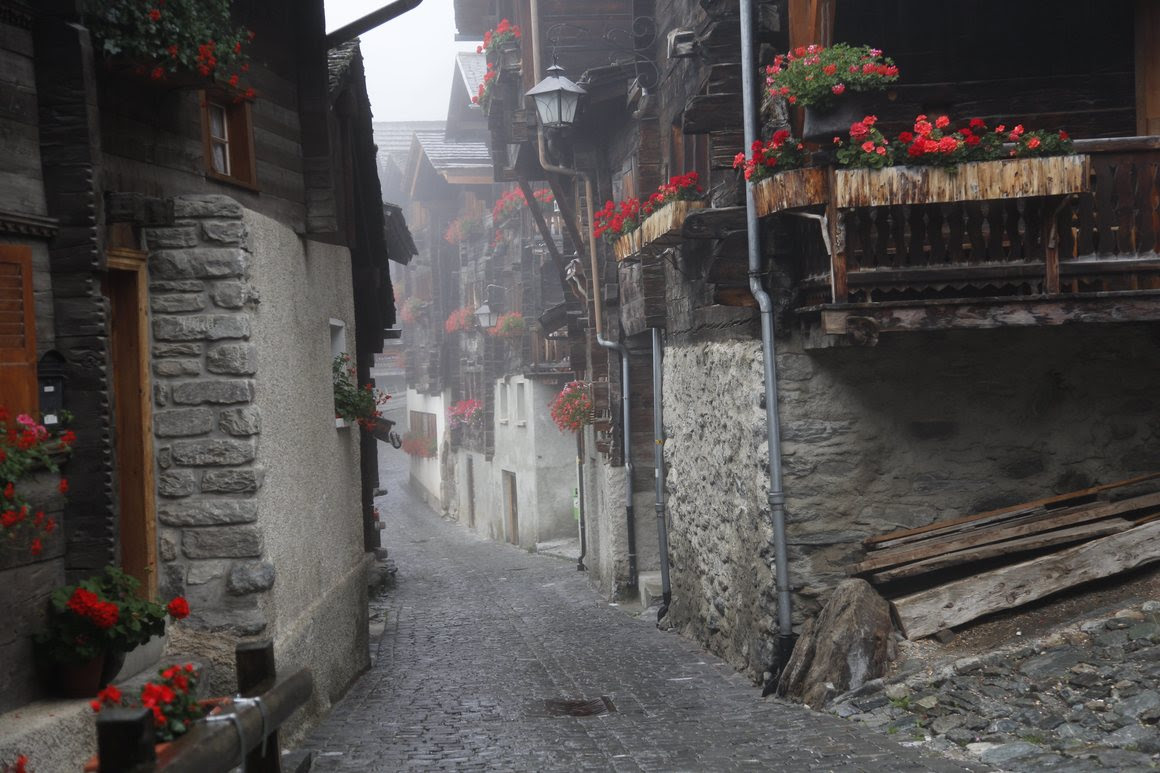 The village center of Grimentz, where Zufferey lives.

Instead of eating the cheeses, whose engravings suggest a production year of 1870, Zufferey’s father decided to preserve them. In the years since, the family has added wheels from time to time, building a collection. Rather than prepping for a funeral, they’re dutifully preserving evidence of a waning tradition—and what might be some of the world’s oldest wheels of cheese.

Zufferey picks one of the wheels, which is now 149 years old, from the shelf. “You can touch it—like a relic in the church,’” he quips. Rock hard and leathery, with a glossy brown surface reminiscent of a bog body, it’s still a bit oily, but sapped of moisture. Its own microbes and molds are likely long deceased. He picks up another, from 1967, engraved with edelweiss flowers. A third, from 1992, depicts a “queen cow.” 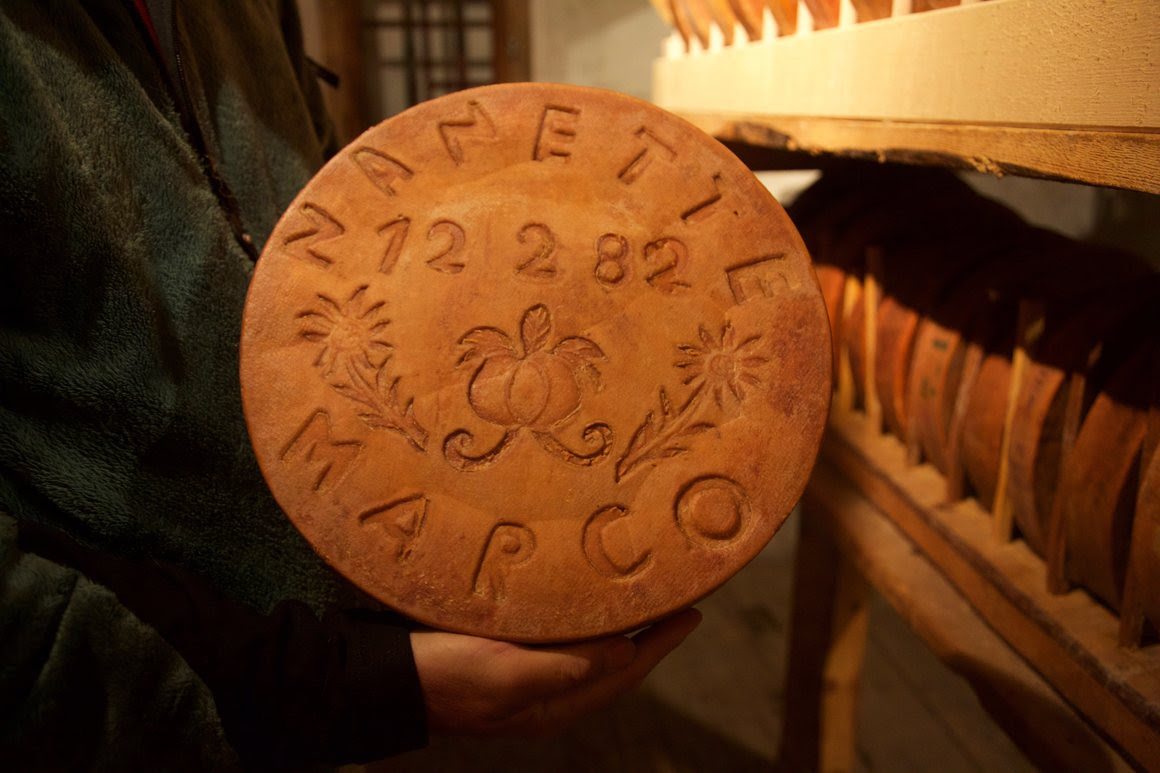 One of Zufferey’s engraved wheels of cheese.

Perhaps pondering his own mortality, Zufferey worries about what will happen to his collection in the long term. He’d like to give them to a museum, but can’t find anywhere nearby with proper climate control. “There is no museum of cheese in the Valais,” he says. “It’s bizarre.”

There’s no rush, though. His cool cave cut into the mountainside beneath his family’s wooden chalet seems to be working for these wheels. Zufferey gingerly places them back into their horizontal compartments, ducks out of the tiny basement back into the cobbled village square, and locks the door. Casting darkness on the uneaten death cheeses, he leaves them to await their own fate.

Molly McDonough is a writer and editor based in Vermont.

“The ultimate measure of a man is not where he stands in moments of comfort and convenience, but where he stands at times of challenge and controversy.” Dr. M. L. King, Jr by Kaliyah Frasier, 12 Dr. Martin Luther King Jr. was born on January 15, 1929, in Atlanta, Georgia.  He was an American Baptist Read More…

Stephen Curry A Man Amongst Men

Stephen Curry Is Putting It All on the Line The NBA superstar has changed the game of basketball for the better. Now, can he help change America? Photographs by Andre D. Wagner Sep 12, 2022 9:00 am Stephen Curry has come a long way since the curious case of the government plot from outer space. Five Read More…