Royal, a neighborhood just west of Wildwood in Sumter County — Royal, one of the oldest Black communities in the state, houses over 150 years of history.

The grove of trees where Phillip James was born is just a few yards from where he sits now: the front lawn of the Wildwood house he’s called home on and off for 80 years.

That community may be halved by potential construction on the Florida Turnpike. The Northern Turnpike Extension, a proposed project that would expand the road, could run through Royal, among other areas of Citrus, Levy, Marion and Sumter counties.

That community may be halved by potential construction on the Florida Turnpike. The Northern Turnpike Extension, a proposed project that would expand the road, could run through Royal, among other areas of Citrus, Levy, Marion and Sumter counties. 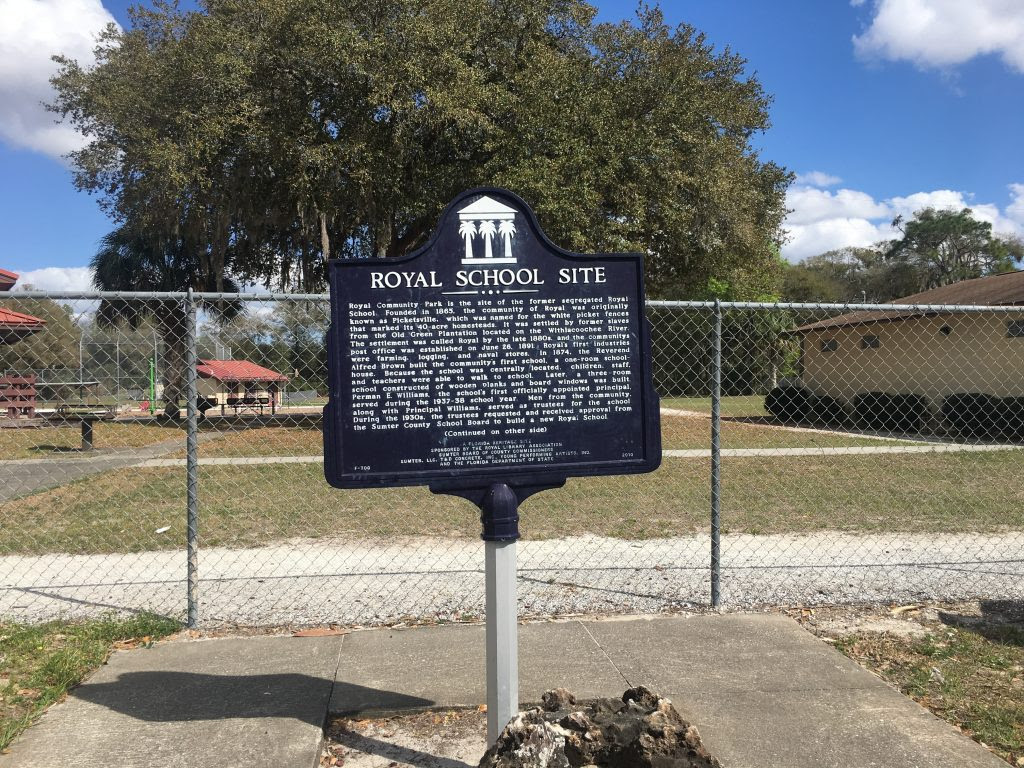 The community of Royal is marked by Royal Park, where the historic Royal School used to stand. (Heather Bushman/WUFT News)

James, 80, is opposed to the turnpike, which would impact properties near County Road 462. His house on County Road 235 is in the path of all four potential routes.

James, who retired from his job in carpet manufacturing before moving back to Royal, said he worries about where he’ll go if his home is taken by the turnpike.

James isn’t alone in his concerns. Royal residents like Larry Lawson, 58, fear financially for not just the potential loss of their homes but also the lack of compensation.

When the Florida Department of Transportation acquires a property for public use, it is required under eminent domain law to offer the owners an amount equal to the estimated value of the property. But Lawson feels the department’s gain far outweighs any money he’d receive for his house.

“They’re making a billion dollars, and they don’t give us chump change,” he said.

Community members and local leaders feel similarly, and they continue to rally against the extension. Despite potential traffic relief on Interstate 75 and easier access to neighboring regions, Royal residents have made their opposition clear.

They gathered on Feb. 28 at New Life Center Ministries, located at 9707 County Road 229, to speak with officials from FDOT and voice their opinions on the turnpike. Most speakers were against the construction and called for a “no build” option, which would scrap all project plans.

Local governments in places like Levy County have passed no build resolutions, which implore FDOT to choose to shelve the project. Though not legally binding, the resolutions indicate the community’s position on the potential construction, which the extension’s project manager William Burke said FDOT takes into consideration.

In Wildwood, officials have called for alternative routes that avoid Royal. The city and the Sumter County Board of Commissioners sent a joint letter to FDOT pushing for a modified plan to “reduce the adverse impact on the historic African-American community.”

Royal represents almost two centuries of history, and the community that stands today is close-knit. Neighbors often gather for barbecues or bonfires, cars honk in recognition when they pass through the dusty roads and friends spend days chatting in lawn chairs. 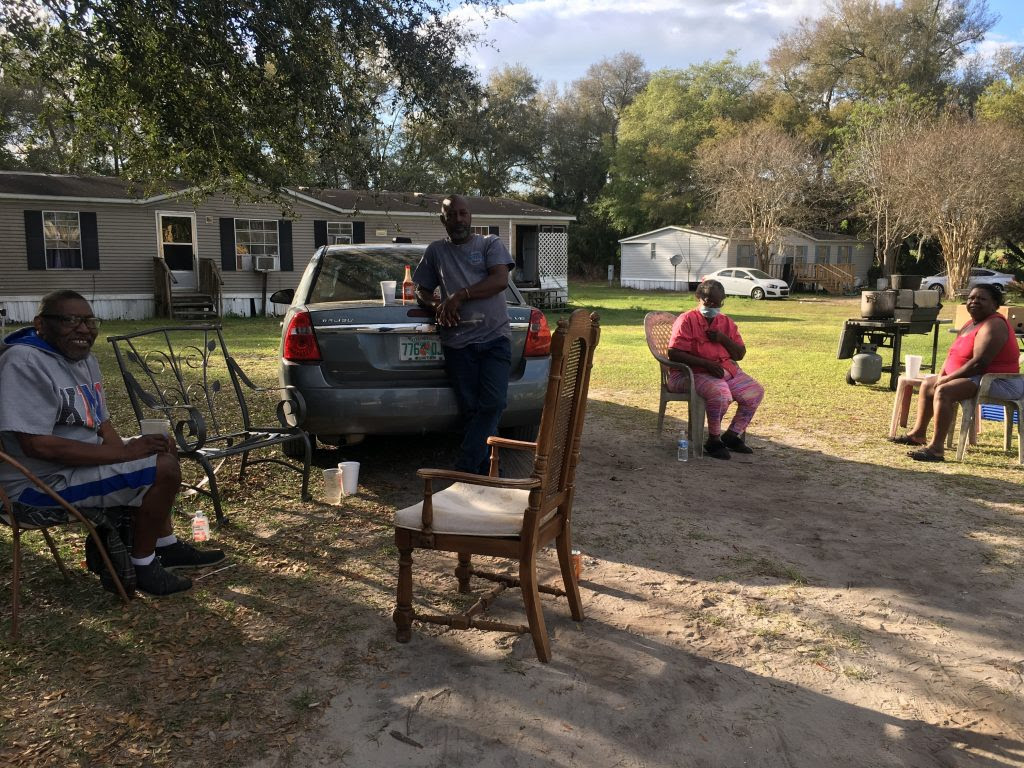 Pictured from left to right, John Dunlap, 58, Larry Lawson, 58, Dorthea Jackson, 80, and Angela Solomon, 60, often gather in Jackson’s yard to catch up. Like them, many Royal residents grew up together and have lived here their entire lives. (Heather Bushman/WUFT News)

Wildwood’s population is 23.3% Black, a fraction of the 66% white population. Lawson feels the construction will disproportionately hurt Black residents.

“From what I see, they’re trying to move the Black neighborhood out,” Lawson said. “I’m not with it.”

As it stands, each of the routes would run through Royal — splitting not just friends and neighbors but also families.

Brothers Levi and Willard Solomon live a few houses down from each other on County Road 231, and they have other relatives who also live in Royal. The Solomons are just one of several families who have stayed together in Royal for generations.

If the construction plans continue, Levi, 67, and Willard, 57, will be separated from their mother, 90, and two of their aunts, 97 and 100. The extension would split Royal in two, leaving the Solomons scattered on either side.

The extension is still in its early stages. The Project Development and Environment Study, which evaluates the potential impacts to affected areas, will not conclude until spring of next year. Even then, FDOT would still need to choose a route, if any, and prepare for construction.

But in places like Royal, residents are already bracing for impact and calling for a change of plans. Locals like Levi said the community culture is too rich for the routes to run through it.

“There has to be another alternative,” he said. “You don’t break a community like ours to put in a road.”

Herschel Walker, Reject Media Claims of ‘Racial Divide’ in Rural Georgia 85 Brett Davis/Getty Images Ashley Oliver 19 Oct 20221,052 10:48 WRIGHTSVILLE, Georgia — Those who knew Herschel Walker before he gained national fame and launched a bid for U.S. Senate are standing up for him after mainstream media attempted to tie the beloved football Read More…

By Mae Johnson W. Clement Stone once said, “Little Hinges Swing Big Doors”! What he essentially meant was, the small things we do open the door to the big things in life. W. Clement Stone also announced that, “Tough times don’t last, tough people do”!This message is intended to let you know that you can Read More…

Financial Exploitation Of Black People Goes Far Beyond Investments In Private Prisons The tumultuous events of last summer brought centuries of racial justice reckoning and awareness to the forefront of conversation across America. Suddenly, the polarity of the Americans’ understanding of and commitment to racial justice was on full display. We were left in a Read More…