A private prison in Arizona recently sued the state for having a lack of prisoners. For the sake of saving over $16 million in back pay, the state settled by paying the private prison $3 million.  Arizona essentially payed a company $3 million because not enough people are committing crimes.

To be fair, it’s a bit more complex than that. In July, 2010 three violent inmates escaped from an Arizona private prison, which prompted officials to stop sending new inmates to the facility. I say good job to the officials for demanding better performance from Management & Training Corp., the company that runs the prison. Unfortunately, a line in the company’s contract with the state guarantees that the prison is at least 97% full at all times.  They sued on grounds that the breach of contract caused a dramatic loss in revenue. 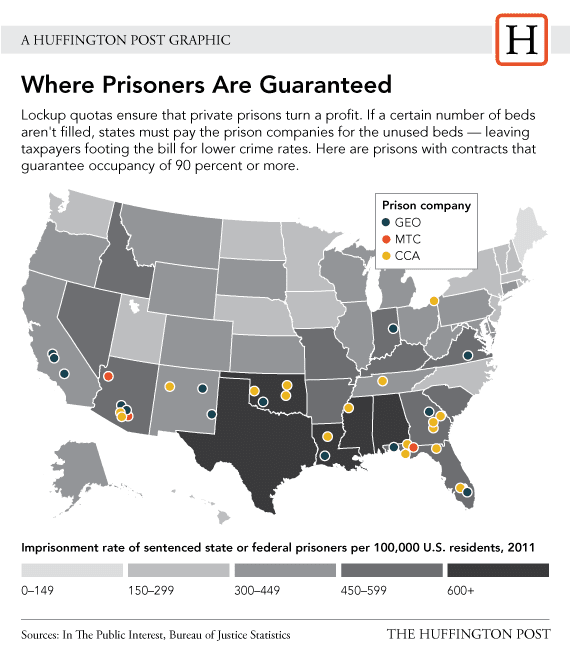 Surprisingly, this type of contractual agreement is the norm. A review from In the Public Interest revealed that out of 60 analyzed contracts between state/local governments and private prisons, 65% contained language mentioning prisoner quotas. This means that state officials have absolutely guaranteed private prisons a profit. And who finances that guarantee? The taxpayers, of course!

Did you catch that? Some private prisons are guaranteed 100% occupancy, and if they don’t get 100% of the beds filled they still receive a grand payday via our collective paychecks.

In an interview in 2010, former Arizona Attorney General Terry Goddard pointed out a crucial issue regarding private prisons, saying

I believe a big part of our problem is that the very violent inmates, like the three that escaped, ended up getting reclassified [as a lower risk] quickly and sent to private prisons that were just not up to the job. 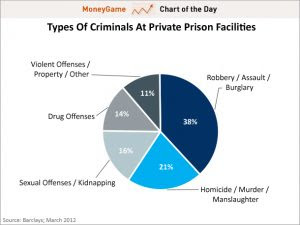 A bit skewed, no? www.businessinsider.comThis is incredibly irresponsible and dangerous behavior, especially since many private prisons are under-equipped and poorly run.  They contain inadequate patrols and prisoner movement, excessive false alarms, a lax culture, and inconsistencies in visitor screening procedures.

According to Michele Deitch, a senior lecturer and criminal justice expert at the University of Texas School of Public Affairs,

It’s really shortsighted public policy to do anything that ties the hands of the state. If there are these incentives to keep the private prisons full, then it is reducing the likelihood that states will adopt strategies to reduce prison costs by keeping more people out. When the beds are there, you don’t want to leave them empty.

In summation, we are putting unnecessary contractual agreements with a private corporation above the safety and well being of citizens. A 2011 report by the American Civil Liberties Union pointed out that

private prisons are more costly, more violent and less accountable than public prisons, and are actually a major contributor to increased mass incarceration.

This is most apparent in Louisiana, which is the prison capitol of the world and houses a large amount of its prisoners in private prisons.  So, why do we have private prisons anyway?

Why Do We Use Private Prisons?

The initial use of private prisons is directly linked to the utter failure that is the War on Drugs. In 1970 Nixon began, and all subsequent presidents continued, to became intensely serious about the war on drugs and started punishing non-violent, hard working Americans for ingesting substances responsibly and safely. From 1960 to 1980 the number of total arrests nationwide rose by 28% while the number of drug related offenses rose by more than 127%, with the number continuing to rise exponentially.

(Nearly 40% of all federal and state inmates are non-violent drug offenders. Moreover, more than half of all drug-related arrests are entirely cannabis related.)

These dramatic rises in arrests left state and local governments scrambling.  Hiring a private company to handle the hard work was the obvious answer.

With a burgeoning prison population resulting from the “war on drugs” and increased use of incarceration, prison overcrowding and rising costs became increasingly problematic for local, state, and federal governments. In response to this expanding criminal justice system, private business interests saw an opportunity for expansion, and consequently, private-sector involvement in prisons moved from the simple contracting of services to contracting for the complete management and operation of entire prisons.

The first time a private company was given the job of warden was in 1984, in Hamilton County, Tennessee.

It is clear that the mere presence of private prisons has severely hampered any type of progress in reducing the amount of people behind bars. This should be a top priority for the country, since the US has the highest rate of incarceration in the entire world, with more than 1% of the entire population currently behind bars, and an additional 2% of the population on supervision, probation, or parole. That accounts for about 3% of the US population under correctional supervision.

By a large margin, the US has the largest percentage of prisoners based on population in the world. The International Centre for Prison Studies at King’s College in London lists some startling statistics:

This level of imprisonment is a staggering waste of financial resources.

Taxpayers spent about $68.7 billion in 2008 to feed, clothe, and provide medical care to prisoners in county jails, state and federal prisons and facilities housing legal and illegal aliens facing possible deportation. From 1982 to 2002, state and federal spending on corrections, not adjusted for inflation, rose by 423%, from $40 to $209 per U.S. resident. Corrections spending, as a share of state budgets, rose faster than health care, education, and natural resources spending from 1986 to 2001. The average cost of housing a prisoner for a year was about $24,000 in 2005, though rates vary from state to state.

… the benefit to counties where private prisons are built and operated can be quite scant — some receive less than $2 per prisoner per day from the private prison operator…the federal government agreed to pay CCA [one of the largest private prison firms] almost $90 per day for each detained immigrant at a San Diego facility.

Today, private companies imprison roughly 130,000 prisoners and, according to one group, 16,000 civil immigration detainees in the United States at any given time. As states send more and more people to prison, they funnel ever greater amounts of taxpayer money to private prison operators. By 2010, annual revenues of the two top private prison companies alone stood at nearly $3 billion.

Private prisons are a total loss of revenue, profit from crime while encouraging higher incarceration rates, have no incentive to rehabilitate or reform prisoners, and have no responsibility to the well being of the American people. Maybe it’s time to re-think the privatization of prisons and America’s prison-industrial complex as a whole.

Russian businessmen keep dying. No one knows why.

A Russian pedestrian walks along a bridge over the Moskva River in front of the Vodovzvodnaya tower of the Kremlin and the Russian Foreign Ministry headquarters in central Moscow on October 4, 2022. Yuri Kadobnov/AFP via Getty Images It’s a rough year to be a high-profile Russian: After nearly eight months of war in Ukraine, Read More…

YouTube YouTube is the next MTV   YouTube is going the way of MTV. It’s like a once-great rock band that’s been taken over by corporations, sellouts, and grifters. Ask yourself: Why do I keep getting YouTube Premium ads when I said no? Why can’t I see dislikes on videos? Why do I have to Read More…

Everyone – Tips and Unknown Facts

Everyone knows holding a roll of nickels in their fist and punching someone increases the punching power of a person by an incredible amount. Most don’t know even using something smaller and lighter is devastating. Punching someone with a roll of chapstick or a Bic lighter in your fist will turn your punch from a Read More…