This Ain’t Another Statement! This is a DEMAND for Black Linguistic Justice!

This Ain’t Another Statement! This is a DEMAND for Black Linguistic Justice!

As with previous CCCC/NCTE resolutions and position statements, we situate this demand in our current historical and sociopolitical context. Our current call for Black Linguistic Justice comes in the midst of a pandemic that is disproportionately infecting and killing Black people. We write this statement while witnessing ongoing #BlackLivesMatter protests across the United States in response to the anti-Black racist violence and murders of Breonna Taylor, George Floyd, Ahmaud Arbery, Tony McDade, and a growing list of Black people at the hands of the state and vigilantes. We are observing calls for abolition and demands to defund the police. We are witnessing institutions and organizations craft statements condemning police brutality and anti-Black racism while ignoring the anti-Black skeletons in their own closets. As language and literacy researchers and educators, we acknowledge that the same anti-Black violence toward Black people in the streets across the United States mirrors the anti-Black violence that is going down in these academic streets (Baker-Bell, Jones Stanbrough, & Everett, 2017). In this current sociopolitical context, we ask: How has Black Lives Mattered in the context of language education? How has Black Lives Mattered in our research, scholarship, teaching, disciplinary discourses, graduate programs, professional organizations, and publications? How have our commitments and activism as a discipline contributed to the political freedom of Black peoples?

Though CCCC/NCTE has been active in the ongoing struggle for language rights, Kynard (2013) reminds us that “the possibilities for SRTOL [were] always imagined, and yet never fully achieved [and this] falls squarely in line with our inadequate responses to the anti-systemic nature of the ’60s social justice movements” (p. 74). In reflecting on the current historical moment and movement for Black lives, Baker-Bell (2020) argues that “the way Black language is devalued in schools reflects how Black lives are devalued in the world . . . [and] the anti-Black linguistic racism that is used to diminish Black Language and Black students in classrooms is not separate from the rampant and deliberate anti-Black racism and violence inflicted upon Black people in society” (pp. 2–3). Today, we uphold the updated CCCC statement on Ebonics that explicitly states:

As an organization that proclaims “to apply the power of language and literacy to actively pursue justice and equity for all students and educators who serve them,” we cannot claim that Black Lives Matter in our field if Black Language does not matter! We cannot say Black Lives Matter if decades of research on Black Language has not led to widespread systemic change in curricula, pedagogical practices, disciplinary discourses, research, language policies, professional organizations, programs, and institutions within and beyond academia! We cannot say that Black Lives Matter if Black Language is not at the forefront of our work as language educators and researchers! In our efforts to move toward Black Linguistic Justice, we build on the historical resolution/policymaking work within CCCC/NCTE that has laid the foundation for our discipline, but we want to be clear: This Ain’t Another Statement! This is a DEMAND for Black Linguistic Justice! PeriodT! 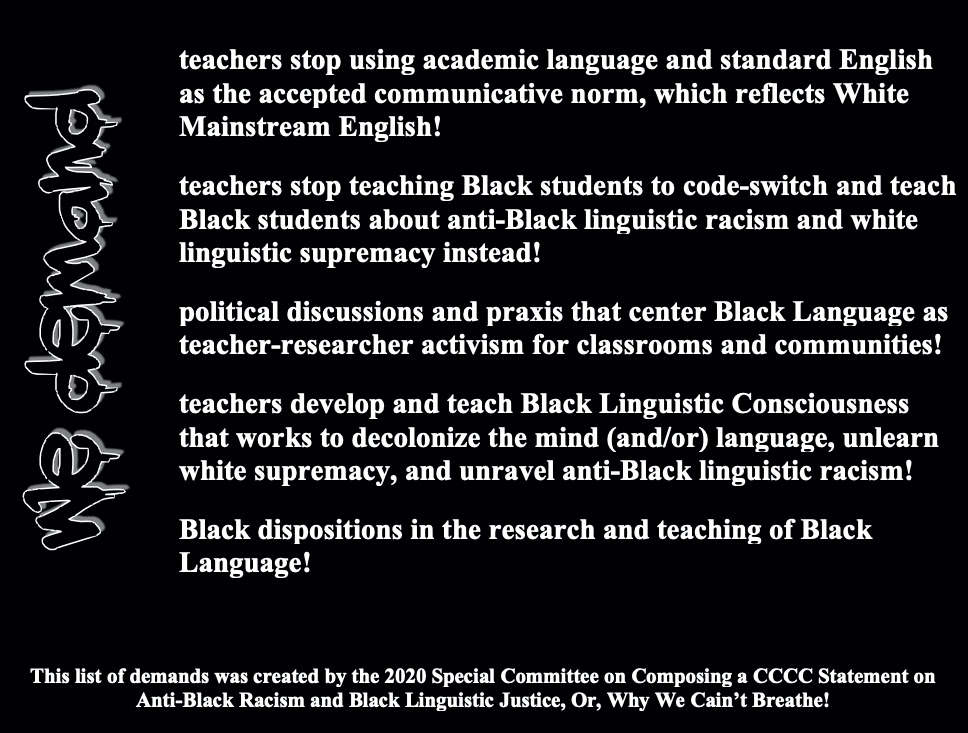 This list of demands was created by the 2020 CCCC Special Committee on Composing a CCCC Statement on Anti-Black Racism and Black Linguistic Justice, Or, Why We Cain’t Breathe! The members of this committee include April Baker-Bell, Bonnie J. Williams-Farrier, Davena Jackson, Lamar Johnson, Carmen Kynard, and Teaira McMurtry, six Black language scholars whose lived experiences as Black Language speakers inform our teaching, scholarship, research, and activism. Through our collective work on these demands, we are channeling the Black Radicals who came before us, both in our disciplines and in our communities! We intentionally created a fluid text from our multiple voices rather than a singularly voiced, standardized, white document.

We expand on this list of demands in the section below.

The language of Black students has been monitored, dismissed, demonized—and taught from the positioning that using standard English and academic language means success. Since these terms’ early inception, schools have upheld linguistic ideologies that continue to marginalize Black students. Socially constructed terms like academic language and standard English are rooted in white supremacy, whiteness, and anti-Blackness and contribute to anti-Black policies (e.g., English only) that are codified and enacted to privilege white linguistic and cultural norms while deeming Black Language inferior. The learning of standard English has historically been obligatory despite our knowledge that linguistic shaming and dismissal of Black Language has a deleterious effect on Black Language speakers’ humanity (Smitherman, 2006; Rickford & Rickford, 2000). We must acknowledge that Black students’ language education continues to perpetuate anti-Black linguistic racism (Baker-Bell, 2020) and creates a climate of racialized inferiority toward Black Language and Black humanity.

DEMAND #3: We Demand that Political Discussions and Praxis Center Black Language as Teacher-Researcher Activism for Classrooms and Communities!

The historical processes of defining and pursuing CCCC/NCTE policies in relation to multilingualism have been vital to classrooms and communities.. However, teacher-researchers must keep pushing further and lay out the specificity of Black Language. Educators who research and support Black Language must move beyond merely understanding and codifying current scholarship, data-driven study, and linguistic analyses. They must be activists. Respect for Black Language fundamentally requires respect for Black lives, a political process that must inherently challenge institutions like schools whose very foundations are built on anti-Black racism. We DEMAND political discussions and praxis of Black Language as guided by the work of teacher-researcher-activists in classrooms and communities who stand against institutions that seek to annihilate Black Language + Black Life.

We DEMAND the cultivation of Black Linguistic Consciousness. Raising Black Linguistic Consciousness requires place and space for divulging untold truths. This, in turn, prioritizes the reversing of anti-Black linguistic racism, the healing of the souls of Black folks, and the empowering of agentive political choices that call for the intentional employment of Black Language (Baker-Bell 2020; Kynard, 2007; Richardson, 2004). This is the exercising of liberation. Further, this requires that all students get an opportunity to learn about Black Language from Black language scholars or experts (via texts, lectures, etc.). For Black students specifically, it is imperative that they learn Black Language through Black Language; that is, they learn the rich roots and rhetorical rules of Black Language (Baker-Bell, 2020) by any means necessary. At the same time, this warrants the ceasing of anti-Blackness and miseducation—specifically, ineffectual language arts instruction—that misguidedly limits language mastery to White Mainstream English (revisit Demand #1). Black students need the kind of artful language instruction in which they are positioned as the linguistic mavens they are who can teach you a thing or two about language.

DEMAND #5: We Demand that Black Dispositions Are Centered in the Research and Teaching of Black Language.

We DEMAND that research and the teaching of Black Language center the work of Black language scholars whose research agendas and expertise are informed by their lived experiences as Black people and Black Language speakers. We specifically call for the centering of scholarship by Black women and early career Black language scholars whose scholarship is often marginalized in the research literature. We denounce the centering of research by white scholars on Black Language, which has too often been elevated in the field and deemed leading and foundational scholarship (e.g., Caldwell, Labov, Wolfram, Heath, etc.). This has contributed to many white and non-Black scholars of color gaining a platform to discuss Black Language and culture without including Black perspectives or commitments to the political freedom of Black peoples. This is an act of dehumanization and erasure of Black bodies from our own lived experiences! We demand that researchers, teachers, editors, and those in positions of leadership within CCCC/NCTE (and all professional organizations) call out these examples of anti-Black violence as well as hold themselves accountable.

If reading this made you feel some kinda way, instead of coming for these demands, let us help you redirect that energy. If you thought these demands were simply about teaching within traditional white norms or fixing Black students and their language practices, you got it wrong! This is a DEMAND for you to do much better in your own self-work that must challenge the multiple institutional structures of anti-Black racism you have used to shape language politics. To all the upper-level college administrators, mid-level college managers, WPAs, deans, department chairs, superintendents, school district leaders, principals, school leaders, curriculum coordinators, state and national policymakers, and editors: We see y’all! Don’t get it twisted—these demands are for y’all too!

Don’t get silent when it comes to Black Lives and Black Language in these academic streets! Keep that same energy when it comes to fighting for Black Lives in our field that you had when you used the hashtag #BlackLivesMatter on your social media platforms following George Floyd’s murder; chanted #SayHerName for Breonna Taylor and #AllBlackLivesMatter for Tony McDade at your first #BLM protest this summer; sent that email/text to your Black “friend” to profess your allyship; and helped craft that Black Lives Matter statement on behalf of your institution or department.

We DEMAND Black Linguistic Justice! And in case you’ve forgotten what WE mean when WE say Black Lives Matter, we stand with the words of the three radical Black organizers and freedom dreamers/fighters—Alicia Garza, Patrisse Khan-Cullors, and Opal Tometi—who created the historic political project #BlackLivesMatter:

Black Lives Matter is an ideological and political intervention in a world where Black lives are systematically and intentionally targeted for demise. It is an affirmation of Black folks’ humanity, our contributions to this society, and our resilience in the face of deadly oppression.

This list of demands was generously created by the 2020 CCCC Special Committee on Composing a CCCC Statement on Anti-Black Racism and Black Linguistic Justice, Or, Why We Cain’t Breathe! The members of this committee include:

Kynard, C. (2007). “I want to be African”: In search of a Black radical tradition/African-American-vernacularized paradigm for “Students’ right to their own language,” critical literacy, and “class politics.” College English, 69(4), 360–90.

19 Scholarships Worth More Than $5M Awarded to Black Teen

Nationwide — Victory Yinka-Banjo, a 17-year old high school graduate from Nigeria, has received full-ride scholarship offers from 19 prestigious universities in the United States and Canada. Combined, the awards are worth more than $5 million! “It still feels pretty unbelievable. I applied to so many schools because I didn’t even think any school would accept Read More…

Legacy Home Loans –  Black-owned mortgage banking firm headquartered in Las Vegas, Nevada, have opened three new branch offices in Black and minority communities as they continue to make good on their commitment to empowering African American communities throughout the United States. “We have a focus on building sustainable wealth through homeownership and leaving family Read More…

by Darius Goodman | Delta Airlines and HandsOn Atlanta Volunteers partner in a Service Project to revitalize the Bush Mountain Community. (Photo Credit: Alexis Grace/The Atlanta Voice) History is meant to be preserved and steps toward that are already underway for the Negro Leagues’ former team the Atlanta Black Crackers. Driving down Bridges Avenue in Read More…

Sisters Are Owners of Kidpreneurs