Those who were willing to commit to spending 4.5 billion dollars over the next decade to “celebrate” Juneteenth have no excuse for failing to support H.R. 40.

If you’re interested in sharing your opinion on any cultural, political or personal topic, create an account here and check out our how-to post to learn more.

Between April 20 and June 19 of 2021, the officer who murdered George Floyd was convicted, survivors of the Tulsa massacre and their descendants compelled America to confront what we have tried to deny for over a century and Congress made Juneteenth a national holiday. These events help explain why H.R. 40 has gained historic support.

Despite so-called “anti-CRT laws” that now include a desperate measure to ban discussion of race in schools and businesses if people feel “uncomfortable,” most Americans now support the bill. Efforts to suppress the truth about our history won’t work anymore.

As the truth about our history leads us down a road of reckoning with our present, the justification for H.R. 40’s call for a commission to investigate and make recommendations on reparatory proposals is undeniable. H.R. 40 addresses more than slavery. In addition to other goals, the stated purpose of the bill is to: consider a national apology and proposal for reparations for the institution of slavery, its subsequent de jure and de facto racial and economic discrimination against African Americans, and the impact of these forces on living African Americans…”

H.R. 40 will specifically address the tangible legacy of the anti-Black racism that followed the Civil War. 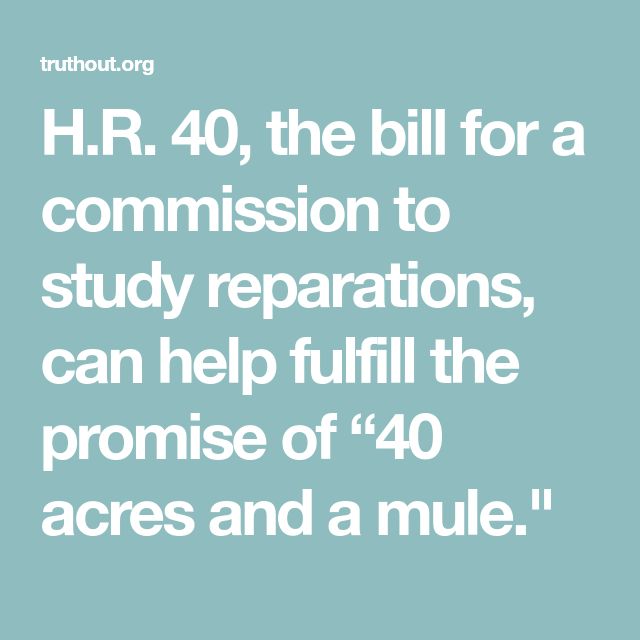 Remember, the 13th Amendment preserved slavery for those convicted of crimes. Black codes and Jim Crow laws were part of a racist system of law enforcement that fed Black people into the convict leasing system until the beginning of WW II and continues to target Black communities disproportionately and unfairly today.

Racial terror lynchings occurred on a massive scale throughout large portions of the 20th century. And separate but equal, which Thurgood Marshall called “…the inherent determination that people who were formerly in slavery, regardless of anything else, shall be kept as near that stage as is possible,” was the law of America for 89 years after the Civil War. Federal, state and local governments participated in racist practices by healthcare and financial institutions, and all three branches of government were also involved in redlining practices that impact Black homeownership even today. H.R. 40 is about much more than slavery.

The wealth established during colonial and constitutional America’s 246-year history of slavery was enhanced not just by suppressing Black freedom and opportunity, but by policies and programs that took affirmative action to advance freedom and opportunity for white Americans only. While the 1862 Homestead Act gave white Americans 80 million acres of land by 1900, General Sherman’s Special Field Order 15, which promised land for freed enslaved people, was never fulfilled.

“At the very same time that America refused to give the Negro any land, through an act of Congress our government was giving away millions of acres of land in the west and the Midwest. Which meant that it was willing to undergird its white peasants from Europe with an economic floor. But not only did they give the land, they built land-grant colleges with government money to teach them how to farm; not only that, they provided county agents to further their expertise in farming; not only that, they provided low-interest rates in order that they could mechanize their farms; not only that, today, many of these people are receiving millions of dollars in federal subsidies not to farm and they are the very people telling the Black man that he ought to lift himself up by his own bootstraps. Now this is what we are faced with, and this is the reality. Now when we come to Washington in this campaign, we’re coming to get our check.”

Dr. King spoke of how “we” were coming for “our” check. He understood the problem. While individual payments may be appropriate in some cases, the damage H.R. 40 seeks to repair is damage to the Black community. H.R. 40 does not violate the “dream” Dr. King expressed in 1963 in Washington D.C. In 1967, Dr. King explained, “I must confess that that dream that I had that day has at many points turned into a nightmare … we got our gains over the last 12 years at bargain rates so to speak.” He concluded, “…now we are confronting issues that cannot be resolved without costing the nation billions of dollars … we can’t get rid of slums and poverty without it costing the nation something.”

Chaymeriyia Moncrief was just 24-years-old when she founded her Tesix Wireless tech company that’s now valued at more than $5 million. Tesix Wireless was launched after Moncrief had a bad experience with a cell phone company. “You go in and they say your phone bill is going to be $98, but you are getting a Read More…

Dont call me Murzyn:  Black Women in Poland are powering the Campaign Against a Racial Slur!!! Like many Polish people of African descent, Sara Alexandre still remembers when she first realized she was seen as different. “For me it was kindergarten,” says Alexandre, whose father is Angolan, describing an incident when she was barred from Read More…

America is engaged in an ideological war between two rival political parties — the Democrats and the Republicans. At the moment this war is a cold Civil War but it could go hot (see https://imprimis.hillsdale.edu/americas-cold-civil-war/). The Democrat Party — and there’s nothing democratic about it anymore — is the party of racism; racial division; racial Read More…