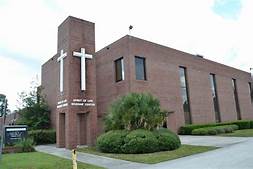 After an unsuccessful run to become the next Executive Director of Retirement Services for the AME church, one may wonder what Pastor Mark L. Griffin would do next.  The answer is simple—continue to provide leadership to Wayman Temple African Methodist Episcopal Church and the broader Jacksonville, Florida community.  And he came back from the 51st General Conference, continuing to build where he left off.  Throughout his campaign, he never slacked on his duties and responsibilities as the senior pastor of one of the most dynamic, up-and-coming churches in our Zion.

In preparation for a victory at the General Conference, Dr. Griffin worked hard to ensure that Wayman Temple and the next pastor would be financially secure and well-organized to move forward with the work of the ministry if he were elected.  “The sign of a good leader is that the work not only survives but also thrives when [the leader] leaves.  After 26 years of pastoring Wayman, I wanted to make sure that I left things in order if I were to leave.  Therefore, we made sure that the church was financially strong,” Griffin said.

Now, Wayman Temple has completed the goal of paying off the south campus mortgage many years early. Shortly after the close of the General Conference, the church wrote a check for just over $320,000 to liquidate the mortgage.  Pastor Griffin stated, “When we purchased this property years ago, the members questioned whether we would be able to afford the monthly mortgage payment.  It was a major faith walk for a congregation that was not used to thinking big. To think that we have grown to the point that we can write a six-figure check without a struggle is a testimony to what God can do if we truly trust him and if we are good stewards of his provisions.”  This once small, 75-member congregation is now a two-campus, 1,400-member ministry with a charter school and a community development corporation.  The ministry employs more than 130 people.

Although Dr. Griffin did not win the election, he fully supports Dr. James Miller and wishes him well.  “Dr. Miller is my friend and fraternity brother.  What many people do not know is that we prayed together several times during the campaign.  We were both running for something and not against each other.”

Now that their south campus location is debt-free, Dr. Griffin is moving forward with making additional improvements to both campuses while he continues to lead the church in the midst of the COVID-19 pandemic.  Although the members of Wayman were disappointed that his dreams of becoming a general officer did not come to pass, they were both relieved and excited to know that he would continue to serve as their pastor and spiritual father.  “I know that the connectional church would have been tremendously blessed by Pastor Griffin if he had been elected.  However, we are elated to know that he will continue to lead us at Wayman.   The AME Church’s loss is Wayman’s gain,” stated Sis. T’Lana Russell, Vice-Chairperson of the West Campus Board of Stewards.  Dr. Griffin, too, is excited about the future of Wayman Temple and adds, “Our latter will be greater than our past.  I am focused and ready to lead this church to even greater heights. Sometimes what appears to be defeat is really a victory.”

By Lucius Gantt      Recently, rapper, actor, producer and businessman Ice Cube, or O’Shea Jackson, said he would talk to “anybody” who had a solid plan to create African American wealth and generate economic development, or something like that.      Well, I’m somebody and I know how to address his wealth building concerns!      I’ve Read More…

Bob Marley, loved for spreading reggae music throughout the world. Bob Marley stood for more than just music. His songs promoted freedom for poor and oppressed people throughout the world, social equality, and justice. Marley even won the 1978 United Nations Medal of Peace. Sadly, events surrounding his estate have been anything but consistent with Read More…

By Lucius Gantt The Beast Bank Conspiracy: Black people all across America are seeing the Black communities they grew up in turning to white neighborhoods. There’s no problem with anyone of any race moving into the neighborhood they desire. One of the problems with so-called gentrification is the unequal ability to acquire home and property Read More…