UF to spend $300,000 on new pool for incoming university president
By Emma Behrmann

The University of Florida is making sure its newly hired president, former Sen. Ben Sasse of Nebraska, can dive into the job: It is spending $300,000 to build a new swimming pool behind the stately mansion where Sasse will live with his family, the school confirmed. 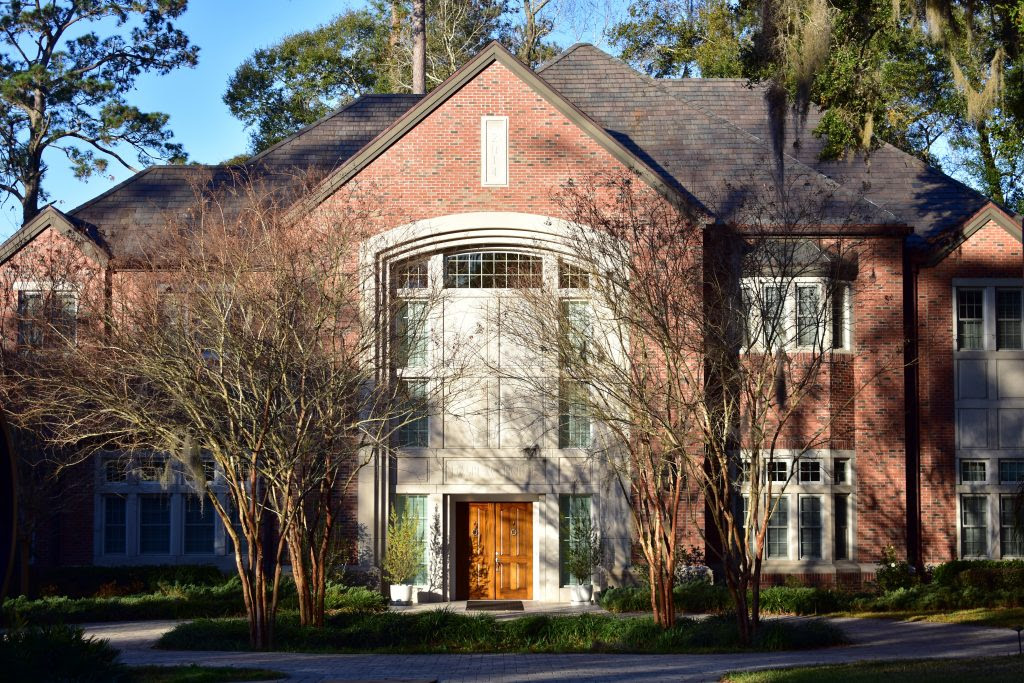 Construction on the expensive addition to the 7,400-square-foot, four-bedroom mansion – provided to Sasse at no cost – started in November and is nearly complete, ahead of his first day as UF’s new president on campus next month. Beyond a perimeter fence, mounds of dirt and pallets of pavers were set to the left of the house, promising a finished pool in coming weeks.

A university spokesman, Steve Orlando, said Sasse did not ask for the pool to be built and provided no input over its design. Sasse had no pool at his family’s home in Fremont, Nebraska. Orlando said the estimated $300,000 to cover its cost came from the mansion’s donors, John and Mary Lou Dasburg of Key Biscayne, and other private sources he did not identify.
The John H. and Mary Lou Dasburg President’s House stands with an open gate on Village Drive in Gainesville, Fla., on Wednesday, Jan. 11, 2022. (Fresh Take Florida/Lauren Whiddon)

The university decided last year, shortly after Kent Fuchs announced he was retiring as UF’s president and before Sasse emerged as the finalist to succeed him, to add the pool to the residence, Orlando said. The university’s original, smaller president’s house also had a pool.

It wasn’t immediately clear why the new pool for Sasse was so expensive, or how much it will cost the university to maintain. The average cost for an in-ground residential pool in Florida is just under $60,000, although features such as tanning ledges, beach entries, hot tubs, lighting, gas-fired heating systems and more can increase design and installation costs.

Sasse, who has a wife and three children, resigned from the Senate last week and is moving his family from the freezing plains of Nebraska to the relative warmth of north-central Florida’s swamp-like environment. Sasse joked on Twitter years ago that his kids and a family dog were taking their first outdoor swim of the year in cold temperatures – in May. “These people (and K9s) are nuts,” he wrote.

Unlike in Fremont, where outside temperatures climb above 70 for only about three months each year, swimmers in Gainesville can comfortably use outdoor pools – even without heaters – for nine or 10 months each year.

Only about 10% of homes in Fremont include in-ground pools, local real-estate agent Lisa Allard said. The Sasse family home in Nebraska has four bedrooms with about 5,700 square feet and includes a waterfall and life-size chess board – but no pool, according to real-estate records.

As a senator, Sasse had access to the Senate gym swimming pool in the U.S. Capitol complex. He also owned a townhome in Washington’s suburbs that had no pool in the building, property records showed. Sasse has said on social media that he and one of his daughters have worked as lifeguards in the past.

Sasse, who begins work on campus on Feb. 6, will be paid $1 million in base salary for five years plus a raise of up to 4% and a bonus after five years of up to another $1 million. He did not respond to phone messages or a letter sent to his home asking to discuss the pool. In the Senate, Sasse was widely known as a Republican fiscal hawk who fought for limited government spending.

The Dasburgs also did not respond to phone or email messages asking to discuss the pool project.

Neighbor Don McGarity, 77, said he has heard construction from the president’s house, but it has not been a nuisance. His home also has a pool.
Construction materials lay in the backyard of the John H. and Mary Lou Dasburg President’s House in Gainesville, Fla., on Wednesday, Jan. 11, 2022. (Fresh Take Florida/Lauren Whiddon)

There are several large, other pools accessible to students and faculty on UF’s campus, within walking distance or a short ride from the mansion in a golf cart, one of Fuchs’ favored modes of transportation. Off-campus, private health clubs across the city include at least four indoor pools accessible with memberships that cost about $14 per week.

The outdoor Graham Pool, which is open from March to Oct., is located on the University of Florida campus in Gainesville, Fla., on Monday, Jan. 9, 2022. (Fresh Take Florida/Lauren Whiddon) Sasse Swimming Pool

When the new president’s residence was completed in 2015, the university temporarily shut down plans for a pool there after Fuchs’ wife, Linda, said she wanted a pool with enough length to swim laps and Fuchs said he wanted a pool with an end at least 8 feet deep for diving. Those requirements – plus landscaping, overhead screening and other related work – pushed cost estimates as high as $538,000.

Fuchs announced last year he was resigning as university president and would teach college classes after a brief break. He and his wife last month purchased a modest three-bedroom home about four miles north of campus for $275,000, according to county property records.

It has no pool.

For the 26 years that Catherine Schweitzer has worked at the Baird Foundation, a nonprofit based in Buffalo, New York, her organization has relied in part on a peculiar income stream: the mouthwash Listerine. Every year, a small portion of the global revenue from the iconic mouthwash trickles back into the bank account of the Read More…

Why Healthcare Must Go Green! Green has always been my favorite color, though I didn’t know why until recently.  Now it is fast becoming the world’s favorite color, and thank goodness for that. Whether more and more people are “going green’ and becoming more environmentally conscious because it is trendy and cool, or because they Read More…