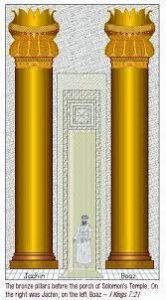 The secret of Solomon’s Pillars is this: The Jachin pillar (meaning Yah establishes) is King Solomon, and the Boaz pillar (meaning strength) is King David. And these two were Israel’s most illustrious kings and also the ones mostly responsible for planning and/or building the Jewish Temple. Both kings are messianic figures. All that follows is explanatory.

First, let us make it clear from the beginning that the name Jachin isnot at all etymologically related to the name Solomon, and only somewhat to his second name Jedidyah (2 Samuel 12:25). Nor is the name David etymologically related to Boaz at all. Nor does the following explanation rely solely on this etymological approach. To find the relation between the names of the pillars and these two kings, we must travel an additonal route. For a description of the pillars, see 1 Kings 7:15 – 22 and 2 Chronicles 3:16, 17.

David’s Battles and Solomon as Jachin

The scholarly opinion, seems generally agreed that Jachin means establish. But Boaz is highly disputable. It means strength, boldness, striker or perhaps fleetness – or neither; it is an unknowable, some say . Its meaning, though, must not be searched for solely in its etymological origins, but also in the lives of both kings, what they did or what was said about or to them, and by whom.

In I Chronicles 17:1 King David expresses a desire to build God a house (temple) but the Lord gently declines the offer, v.3, telling him that, instead, his son (Solomon) will build it; and through his son, David’s  dynasty and kingdom will be “established,” a word used five time in vv. 17:9 – 14 in the Jewish Publication Society’s Tanakh, and five more in 2 Samuel  7:10 -16. Therefore, Solomon is the establisher. What does this have to do with the name Jachin? A great deal, because in I Chronicles 18:3 – 8 King David makes war against King Hadadezer, and conquers the towns of Tibbath (also spelled Tibhath) and Cun (Chun) and takes massive amounts of bronze. And from this bronze, v. 8, Solomon makes various Temple vessels, including the twin bronze pillars Jachin and Boaz. But surprisingly, the name Cun is etymologically related to Jachin (Yakin). Cun means establish or stand upright, while Jachin (Yakin, Yah-kin) means Yah establishes. Yah is a contraction for Yahweh, God’s name. Hence, establish links Cun, Jachin, and Solomon, who was also named Jedidyah, beloved of Yah . If so, is Tibbath also possibly linked to David?

As stated before, the bronze for the pillars was also gotten from Tibbath. But there is no etymological link between Tibbath and Boaz. Unlike Jachin and Cun, Boaz and Tibbath have no root word connections at all. But are they conceptually related somehow? –  the answer is yes. For example, seat and sofa have no etymological connections, no root unites both. The first is of Middle English origin, the latter of Arabic roots; yet both are conceptually related to the function of sitting.

Tibbath means slay, slaughter or butcher and may even refer to a cook as one who butchers animals for food. However, the root meaning itself refers to the slaughtering of animals or men. In 2 Sam. 8:8 Tibbath is rendered as Betah* (see footnote). Further, it is believed Tibbath was derived from the name Tebah (thus, Betah), a nephew of Abraham listed in Genesis 22:24. What does Tebah mean? –  a time or place of slaughtering, Anchor Bible Dictionary, Vol. 6, p. 343.

“You have shed much blood”

All will agree that slaughtering animals or men involves shedding blood, and this is exactly why the Lord did not allow King David to build the Temple (I Chronicles 22:8, 9; 28:3) but appointed his son Solomon, instead. For “you have fought great battles and shed much blood,” the Lord told David. This was not a rebuke, necessarily, but an indicator that he did not want the Temple assciated with war. In fact, before capturing Tibbath and Cun, David’s army slew 22,000 men, I Chronicles 18:5.

By now the conceptual relation of Tibbath to Boaz ought be fairly clear: Successful battles are fought by strong military men – by men of force – and this is exactly what David was, a man of military might. God himself told him, “You have fought great battles,” something which hardly fits a soft man or a military loser. And without question, David was the best Israelite warrior ever. How can he not be linked with strength or force? Finally, David began his military career by slaying Goliath, whom he decapitated  with the giant’s own sword,  I Samuel 17:50, 51. David, therefore, is Boaz, the military strongman, striker, and slaughterer.

Should David be Honored with a Temple Pillar?

The question arises: If the Lord did not allow David to build the Temple because he was a man ofwar, why should he be honored by surreptitiously having one of the Temple’s pillars  represent him as Boaz?

First, David himself did not seek the honor; it may have been Solomon’s idea. David died before the Temple was completed or the pillars erected and named. Second, in the Temple precincts there were many slaughterings and much bloodshed anyway because that’s where animal sacrificial offerings were made daily, many more on special holy days.

But there is a third and far more important reason than the above two. It should be plain that  what the Lord spurned was the shedding of much human blood in physical warfare. There is another type of warfare that everyone should and must engage in: Never surrender to a life of sin and immoralty, never give up this battle. The Israelites that came out of Egypt with Moses surrendered to the Evil Inclination, unbelief, idolatry and immorality and did not, except for a few, inherit the Land.  Instead, a new generation under Joshua entered and took it. So in resisting evil within or outside oneself, every man, woman and child must be or become a Davidic warrior and – through  faith – engage in spiritual  warfare. The Tanach uses many physical things to illustrate invisible spiritual realties. Therefore, although the Temple was of stone, its lessons are of the spirit. Boaz honors David for his enduring  faith, the bedrock of his spiritual warfare.

King David also relates to the Bronze Altar (mizbeach, meaning  to slay, slaughter), for it is here that sin – the true enemy – is slain, i.e., expiated through bloodletting. The altar David made after he sinned was the basis for the Temple’s Bronze Altar, 2 Samuel 24:18, and the site (Mount Moriah) where the Temple was afterwards built, 2 Chronicles 3:1. King Solomon must have remade the Bronze Altar from the bronze gotten at Tibbath (I Chronicles 18:8) a name meaning a place of slaughtering. But Solomon himself relates to the Sea of Bronze whose water symbolizes the spirit of God that makes plants (i.e., people) grow – become established,  flourish and develop in the Lord. And this also is why people are likened to fruit trees and plants, a king’s garden through which the Lord walks,  Genesis 3:8. After all, does not Judaism itself teach that the Temple is microcosm of the Garden in Eden?

* Tibbath, Tebah, Betah – Tibbath is Betah. It seems, though, the author of 2 Samuel or a copyist transposed Tebah ( i.e.,  Tibbath) into Betah. But even this change seems heaven- directed, because Betah means trust, security, confidence and hope, all allusions to faith – something that always loomed huge in David’s life. Whatever one thinks of David, he was a man of profound faith. Regarding war he says, “the Lord is my rock,” Psalms 144:1, as illustrated above.  And as a youth, when facing a fully armored Goliath, he said to him, “ You come to me with a sword, spear and javelin… But I come to you in the name of the Lord…This day will the Lord deliver you into my hands,” I Samuel 17:45- 46. Contrarily, when he put his faith in men by numbering the people, terrible things happened (II Samuel 24:1-17). But when his faith returned, v.v. 18-25, he built an altar atop Mount Moriah that became the site of Solomon’s Temple , 2 Chronicles 3:1. Faith for the battle ( slaughter) unites the meanings of Betah and Tibbath, while  encapsulating David’s mindset in military combat.

The Gantt Report – War in a Babylon

By Lucius Gantt The Gantt Report:   The withdrawal of American troops from the country of Afghanistan will not stop the war there nor will it stop any war anywhere. The war of the worlds cannot and will not be stopped by the rearrangement of soldiers and military resources. Every conflict is about land, money Read More…

Honor of Frederick Douglass NY to be Renames Airport

Rochester, New York‘s airport will be renamed to honor 19th-century abolitionist and freedom fighter Frederick Douglass, one of its most famous and influential residents. According to news, the Monroe County Legislature voted Tuesday night to change the airport’s name to the “Frederick Douglass – Greater Rochester International Airport,” adding the Douglass’ name to the existing Read More…