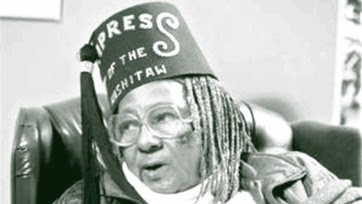 Members of the Moorish sovereigns, called Moors, have come into conflict with federal and state authorities over their refusal to obey laws and government regulations. Recently, Moorish sovereign citizens have engaged in violent confrontations with law enforcement. They have also been known to retaliate against government authorities through financial means — a process called “paper terrorism.” Moorish sovereigns espouse an interpretation of sovereign doctrine that African Americans constitute an elite class within American society with special rights and privileges that convey on them a sovereign immunity placing them beyond federal and state authority.

In its own words

“Your straw-man is a non-living, non-breathing fictitious corporate Entity that has the same name as you except in ALL CAPITAL LETTERS. It’s ultimately a trust that is brought into existence with your signature. Lawfully you are the executor, beneficiary, administrator and a stock holder of the UNITED STATES CORPORATION.”
–Moorish American Resource School

“Political thieves (usually descendants of European Colonists operating upon the American Continents) have, by outright criminality, taken unlawful leave and advantages of the usurped seats of government, and have polluted the sanctity of their Official Oaths to uphold the Constitution and Treaties and are unlawfully violating the Natural People.”
–Taj Tarik Bey

“Everything that will be stated is based on De Jure Law (Common Law, Constitutional Law, Indigenous Rights, Human Rights) and NOT (“just”) admiralty / maritime (De Facto Legalities, such as statutes, codes, rules, regulations, ordinances, policies and etc… ANY colorable law (color of law) that contradicts the Constitution for the united [sic] States of America is NULL and VOID and has NO withstanding [sic].”
–Dr. Alim El Bey

“You are not to pay taxes to foreigners who are doing business within the borders of YOUR ancestral estate.”
–Judah Son

In his article “The Washitaw Nation and Moorish Sovereign Citizens,” Pitcavage writes, “After the ‘Empress’ (e.g. Verdiacee Turner Goston) retired, the original Washitaw group fell apart, replaced with a variety of different groups and individuals taking up the ‘Washitaw Nation’ mantle… So today there is not just one ‘Washitaw Nation,’ but many, making it one of the most important wings of the Moorish sovereign citizen movement,” he says.

The Washitaw Nation appears to be the earliest sovereign citizen group that began merging Moorish identity and heritage with sovereign citizen concepts. In her book Return of the Ancient Ones published in 1993, Verdiacee Turner Goston, “Empress of the Washitaw Nation,” asserts that Moors were among the earliest settlers to America and the rightful owners of all lands ceded to the United States in the Louisiana Purchase. Clint D. Nelson Bey writes in the book’s preface, “This book begs you to start asking questions and do your own personal research regarding your Moorish history and then allow your mind to connect the two.”

“You can’t fool a Washitaw as we, the original Muurs (Moors) of Dugdahmoundyah,” Goston writes on page 202. “We must realize who we are and what we are doing in this land and how we have been preserved for what special purpose.”

Goston later writes on page 203, “My people were here when the white man came to this Afmuurican [sic] continent. They were the Muurs…In later years called the Moors from the land of Tadmor (Palmara or Palmares).”

Other examples of Moorish sovereign citizen groups include the Free Moorish Nation, the United Mawshakh Nation of Nuurs, the Nuwaubian Nation of Moors and the Al Moroccan Empire. These groups primarily operated throughout the Southeastern, Northeastern and Midwestern United States.

In particular, the Nuwaubian Nation of Moors likely played a key role in spreading Moorish sovereign citizen ideology to other key American cities. In her book The Nuwaubian Nation: Black Spirituality and State Control, Susan Palmer writes, “In mid-June, 1999, several Montana Freemen came to town (e.g. Eatonton, Georgia)… One of them introduced himself to the Nuwaubians as a ‘common law judge.’ He moved into Tama Re to work with them.”

So, when the Nuwaubian group’s compound in Eatonton, Georgia, was raided by federal, state and local law enforcement officials on May 8, 2002, and essentially shut down, many Nuwaubian Nation members (who were now knowledgeable of sovereign citizen tradecraft) were displaced and fled to other areas of the country bringing with them Moorish sovereign ideology.

Moorish sovereign citizens espouse an antigovernment doctrine in which its members claim to be part of a sovereign nation. For some who identify themselves as “Moor,” “Moorish” or something similar, there is a belief that a 1787 treaty (fictitious) between the United States and Morocco grants them immunity from U.S. law. Others, such as the Washitaw Nation, may falsely claim to occupy United Nations Indigenous People’s Seat 215 — there is no such thing — and create their own birth certificates, passports, driver’s licenses and vehicle registrations.

There are no reliable figures available on the number of active Moorish sovereigns. A recent survey of Moorish sovereign-related social media sites consistently indicated about 3,000 to 4,000 followers. Furthermore, an official website for submitting petitions to Congress featured a Moorish American sovereignty petition which had over 6,200 petitioners. Self-declared Moorish sovereigns have also been arrested in all regions of the country and many major cities within the United States.

Moorish sovereign citizens have loose ties to the MSTA which has caused confusion among the media and law enforcement who mistakenly link both groups together. Moorish sovereign citizens have also been known to affiliate with other Black Nationalist groups as well as with criminal organizations. Moors have participated in rallies, conferences, and other events with groups, such as the Bloods street gang, the Latin Kings street gang, the New Black Panther Party, the Nation of Islam and Black Hebrew Israelites, according to law enforcement sources. Areas of common interest between Black Nationalists and Moorish sovereigns include their African-American heritage, assertions of entitlement to certain geographical areas, targeting of police and other government officials, violent reaction to incidents of perceived police brutality and engaging in crimes of opportunity.

Since emerging in the early-1990s, Moorish sovereigns have no known involvement in paramilitary training activities. They do, however, conduct training seminars and videotaped classes that teach financial scams and frauds common to sovereign groups. Members also have been known to wear paramilitary style uniforms with patches of the Moorish flag, and to operate vehicles modified to resemble police patrol cars (equipped with a police insignia on the door panels and light bar).

Moorish sovereigns sustain themselves by selling bogus legal documents, fraudulent auto insurance forms, fake license plates, counterfeit passports and various other documents. They also save money by practicing tax avoidance schemes or tax fraud. They have perpetrated large-scale financial fraud, including creating false money orders, fraudulent cashier’s checks, and bogus financial instruments. In some cases, their fraudulent activity is part of a larger sovereign practice called the “redemption doctrine.” It declares that Moors (like all sovereigns) can incorporate themselves, thereby allowing individuals to use themselves as personal assets worth tens of millions of dollars.

Federal, state and local law enforcement have encountered Moorish sovereigns committing a wide range of minor or white collar criminal activity including traffic violations, house squatting, tax fraud, financial scams and violations of government regulations. Of further concern, Moorish sovereigns have recently engaged in violent retaliation against police, court officers and other civil authorities beyond the mere filing of false liens against them and other forms of harassment. Some Moorish sovereign citizens have also been known to target their own for financial scams and other criminal activity.

Last year, a member of African-American NASCAR driver Bubba Wallace’s team reported that he had happened upon a noose in Wallace’s garage.  An FBI investigation determined that the “noose” was a pulldown rope that had been in the garage since 2019. NASCAR released a statement professing to be “thankful to learn that this was not Read More…

Jada Jerrelle Brown, an African American college-bound student from New Orleans, has been accepted into 141 colleges and universities and awarded $5 million in scholarships. “I’m very happy, blessed, thankful, I was a little overwhelmed but I’m good,” Brown told WGNO. With over $5 million scholarships under her belt, she has received the highest amount of Read More…