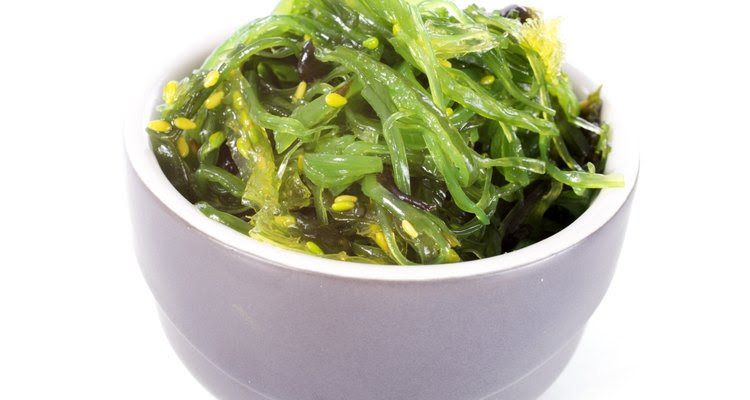 Sold primarily in Asian markets and health food stores, seaweed still is an enigma to the palates of many Americans. However, adding kelp and other varieties of seaweed to your diet may provide a natural solution to optimize thyroid gland functioning and boost performance in people diagnosed with mild hypothyroidism. Nutrient-packed seaweed contains a rich source of iodine and selenium, two minerals essential to thyroid hormone production.

Resting on the lower front of your neck, the thyroid is one of the body’s most important endocrine glands. Using iodine and the amino acid tyrosine, the thyroid produces thyroxine and thyronine, two hormones that regulate temperature, function and growth of every cell in the body. These hormones also affect cognitive functioning, including concentration and memory. Without an adequate supply, a person may experience fatigue, anxiety and weight gain, according to “Thyroid Power,” by holistic practitioners Richard and Karilee Shames.

Seaweed is a diverse group of marine plants made from algae that draw nutrients from the ocean. While seaweed produced from brown algae has more iodine than varieties made from red or green algae, all seaweed varieties have significant amounts of the mineral. Icelandic kelp has the highest iodine content. Kombu, arame and hijiki are other good sources of iodine, the Shames wrote in “Thyroid Power.”

Seaweed also is rich in selenium, a mineral that supports conversion of thyroxine into thyronine, the Shames wrote. Without selenium there would be no thyroid hormone production and conversion, botanist and biologist Ryan Drum wrote in an article on his website, “Island Herbs.” The U.S. Food and Drug Administration has recommended 150 micrograms of iodine per day and 55 micrograms of selenium daily.

Japanese cuisine-inspired soups and grain dishes have incorporated kelp flakes as a salt substitute and seasoning. Dr.Oz.com recommends making your own sushi by putting rice and shredded vegetables of your choice on a nori leaf — roll it up and dip it in sesame oil or a sauce of your choice.

While seaweed contains numerous nutrients beneficial to the body, be aware that it is extremely high in potassium, containing 34 times more than a banana according to the Huffington Post. Excess potassium can trigger heart arrhythmias, so speak to your physician before adding a su

Depopulation Through Forced vaccination: The Zero Carbon Solution. This original article was first published in Issue 4 of The Sovereign independent in June 2011. The lady in the image above was astute enough to keep a hold of the original printed newspaper. The link for free download is at the bottom of this article. Depopulation Read More…

Bob Marley died in 1981 but earns $23m a year after a 3-decade legal battle over his estate Reggae icon Robert Nesta Bob Marley did not die a poor man and his family escaped destitution, thanks to the wealth he left behind from his years of musical dexterity which shot him to global acclaim as Read More…