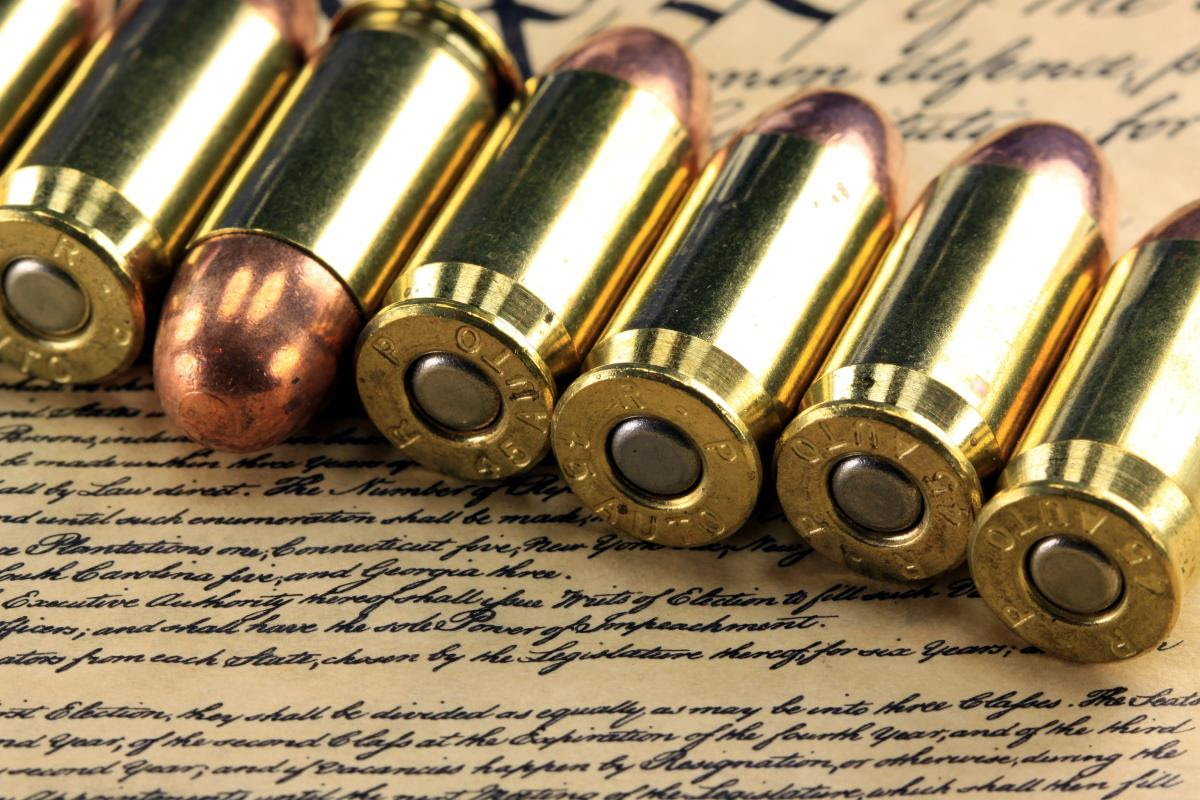 Red flag gun laws (which authorize government officials to seize guns from individuals viewed as a danger to themselves or others) are gaining traction as a legislative means by which to allow police to remove guns from people suspected of being threats, it wouldn’t take much for police to be given the green light to enter a home without a warrant in order to seize lawfully-possessed firearms based on concerns that the guns might pose a danger. 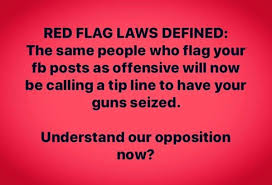 Frankly, a person wouldn’t even need to own a gun to be subjected to such a home invasion.

SWAT teams have crashed through doors on lesser pretexts based on false information, mistaken identities and wrong addresses.

Nineteen states and the District of Columbia have adopted laws allowing the police to remove guns from people suspected of being threats. If Congress succeeds in passing the Federal Extreme Risk Protection Order, which would nationalize red flag laws, that number will grow.

As The Washington Post reports, these red flag gun laws “allow a family member, roommate, beau, law enforcement officer or any type of medical professional to file a petition [with a court] asking that a person’s home be temporarily cleared of firearms. It doesn’t require a mental-health diagnosis or an arrest.”

In the wake of yet another round of mass shootings, these gun confiscation laws—extreme risk protection order (ERPO) laws—may appease the fears of those who believe that fewer guns in the hands of the general populace will make our society safer.

Of course, it doesn’t always work that way.

With these red flag gun laws, the stated intention is to disarm individuals who are potential threats… to “stop dangerous people before they act.”

While in theory it appears perfectly reasonable to want to disarm individuals who are clearly suicidal and/or pose an “immediate danger” to themselves or others, where the problem arises is when you put the power to determine who is a potential danger in the hands of government agencies, the courts and the police.

We’ve been down this road before.

Remember, this is the same government that uses the words “anti-government,” “extremist” and “terrorist” interchangeably.

This is the same government that has a growing list—shared with fusion centers and law enforcement agencies—of ideologies, behaviors, affiliations and other characteristics that could flag someone as suspicious and result in their being labeled potential enemies of the state.

For instance, if you believe in and exercise your rights under the Constitution (namely, your right to speak freely, worship freely, associate with like-minded individuals who share your political views, criticize the government, own a weapon, demand a warrant before being questioned or searched, or any other activity viewed as potentially anti-government, racist, bigoted, anarchic or sovereign), you could be at the top of the government’s terrorism watch list.

Moreover, as a New York Times editorial warns, you may be an anti-government extremist (a.k.a. domestic terrorist) in the eyes of the police if you are afraid that the government is plotting to confiscate your firearms, if you believe the economy is about to collapse and the government will soon declare martial law, or if you display an unusual number of political and/or ideological bumper stickers on your car.

Let that sink in a moment.

Now consider the ramifications of giving police that kind of authority: to preemptively raid homes in order to neutralize a potential threat.

It’s a powder keg waiting for a lit match.

Under these red flag laws, what happened to Duncan Lemp—who was gunned down in his bedroom during an early morning, no-knock SWAT team raid on his family’s home—could very well happen to more people.

At 4:30 a.m. on March 12, 2020, in the midst of a COVID-19 pandemic that had most of the country under a partial lockdown and sheltering at home, a masked SWAT team—deployed to execute a “high risk” search warrant for unauthorized firearms—stormed the suburban house where 21-year-old Duncan, a software engineer and Second Amendment advocate, lived with his parents and 19-year-old brother.

The entire household, including Lemp and his girlfriend, was reportedly asleep when the SWAT team directed flash bang grenades and gunfire through Lemp’s bedroom window.

Lemp was killed and his girlfriend injured.

No one in the house that morning, including Lemp, had a criminal record.

No one in the house that morning, including Lemp, was considered an “imminent threat” to law enforcement or the public, at least not according to the search warrant.

So what was so urgent that militarized police felt compelled to employ battlefield tactics in the pre-dawn hours of a day when most people are asleep in bed, not to mention stuck at home as part of a nationwide lockdown?

According to police, they were tipped off that Lemp was in possession of “firearms.”

Thus, rather than approaching the house by the front door at a reasonable hour in order to investigate this complaint—which is what the Fourth Amendment requires—police instead strapped on their guns, loaded up their flash bang grenades and carried out a no-knock raid on the household.

According to the county report, the no-knock raid was justified “due to Lemp being ‘anti-government,’ ‘anti-police,’ currently in possession of body armor, and an active member of the Three Percenters,” a far-right paramilitary group that discussed government resistance.

This is what happens when you adopt red flag gun laws, painting anyone who might be in possession of a gun—legal or otherwise—as a threat that must be neutralized.

Therein lies the danger of these red flag laws, specifically, and pre-crime laws such as these generally where the burden of proof is reversed and you are guilty before you are given any chance to prove you are innocent.

Red flag gun laws merely push us that much closer towards a suspect society where everyone is potentially guilty of some crime or another and must be preemptively rendered harmless.

Where many Americans go wrong is in naively assuming that you have to be doing something illegal or harmful in order to be flagged and targeted for some form of intervention or detention.

In fact, all you need to do these days to end up on a government watch list or be subjected to heightened scrutiny is use certain trigger words (like cloud, pork and pirates), surf the internet, communicate using a cell phone, limp or stutter, drive a car, stay at a hotel, attend a political rally, express yourself on social media, appear mentally ill, serve in the military, disagree with a law enforcement official, call in sick to work, purchase materials at a hardware store, take flying or boating lessons, appear suspicious, appear confused or nervous, fidget or whistle or smell bad, be seen in public waving a toy gun or anything remotely resembling a gun (such as a water nozzle or a remote control or a walking cane), stare at a police officer, question government authority, appear to be pro-gun or pro-freedom, or generally live in the United States.

You will be flagged as a potential threat and dealt with accordingly.

You will be tracked by the government’s pre-crime, surveillance network wherever you go.

Hopefully you’re starting to understand how easy we’ve made it for the government to identify, label, target, defuse and detain anyone it views as a potential threat for a variety of reasons that run the gamut from mental illness to having a military background to challenging its authority to just being on the government’s list of persona non grata.

The government has been building its pre-crime, surveillance network in concert with fusion centers (of which there are 78 nationwide, with partners in the private sector and globally), data collection agencies, behavioral scientists, corporations, social media, and community organizers and by relying on cutting-edge technology for surveillance, facial recognition, predictive policing, biometrics, and behavioral epigenetics (in which life experiences alter one’s genetic makeup).

Combine red flag laws with the government’s surveillance networks and its plan to establish an agency that will take the lead in identifying and targeting “signs” of mental illness or violent inclinations among the populace by using artificial intelligence to collect data from Apple Watches, Fitbits, Amazon Echo and Google Home, and you’ll understand why some might view gun control legislation with trepidation.

No matter how well-meaning the politicians make these encroachments on our rights appear, in the right (or wrong) hands, benevolent plans can easily be put to malevolent purposes.

As I make clear in my book Battlefield America: The War on the American People and in its fictional counterpart The Erik Blair Diaries, even the most well-intentioned government law or program can be—and has been—perverted, corrupted and used to advance illegitimate purposes once profit and power are added to the equation.

The war on terror, the war on drugs, the war on illegal immigration, the war on COVID-19: all of these programs started out as legitimate responses to pressing concerns and have since become weapons of compliance and control in the government’s hands.

No matter how well-intentioned, red flag gun laws will put a target on the back of every American whether or not they own a weapon

For two decades in public life, powerful Harris has achieved a lot of firsts: the first Black woman to serve as San Francisco’s district attorney, the first woman to be California’s attorney general, first Indian American senator, and now she will be working by Biden’s side after he named her for the nomination to the Read More…