Recycling your Plastic Bottle Tops can become a work of art.

The city is decorated with murals depicting everything from pea pods in the depths of the southwest downtown parking garage to scenes splashed across walls of businesses that look like they’ve been ripped directly from a dream. 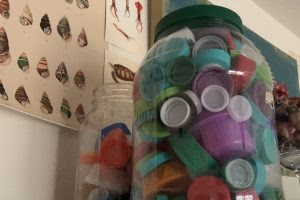 A container of caps sits in Chloe Schwab’s bedroom waiting to be used for the #UNLITTER mural. (Courtesy of Chloe Schwab)

A new Gainesville mural is in the works — this one crafted entirely from bottle caps, as part of a budding partnership between the city and the University of Florida’s chapter of #UNLITTER.

The student-led organization at UF is part of a global movement to promote environmental awareness and sustainability through individual action and among corporations.

In September, the UF chapter reached out to Gainesville Mayor Lauren Poe about creating a mural in the city made entirely of bottle caps. While logistics like the location are still being determined, the cap collection is well underway – they have about 1,000 now.

“Visual mediums are a great way to connect people,” Poe said. “They draw on our emotions, and they have impacts in ways that seeing a video or listening to someone talk just cannot.”

#UNLITTER doesn’t have one central storage space, so caps are sprinkled in the nooks and crannies of executive board members’ homes.

Chloe Schwab, the organization’s event coordinator, said her patio is polluted with huge buckets bursting with bottle caps. The caps aren’t kept exclusively outside of her apartment, either.

Her apartment’s leasing office doesn’t technically allow the buckets to remain on her porch, so Schwab seeks other places to store them.

The UF marine science junior said she conceived the idea for a mural after joining the executive board about one year ago.

“I was trying desperately to think of anything that reuses another item for some kind of swag,” she said. “In the process, I fell into the bottle caps wormhole.” 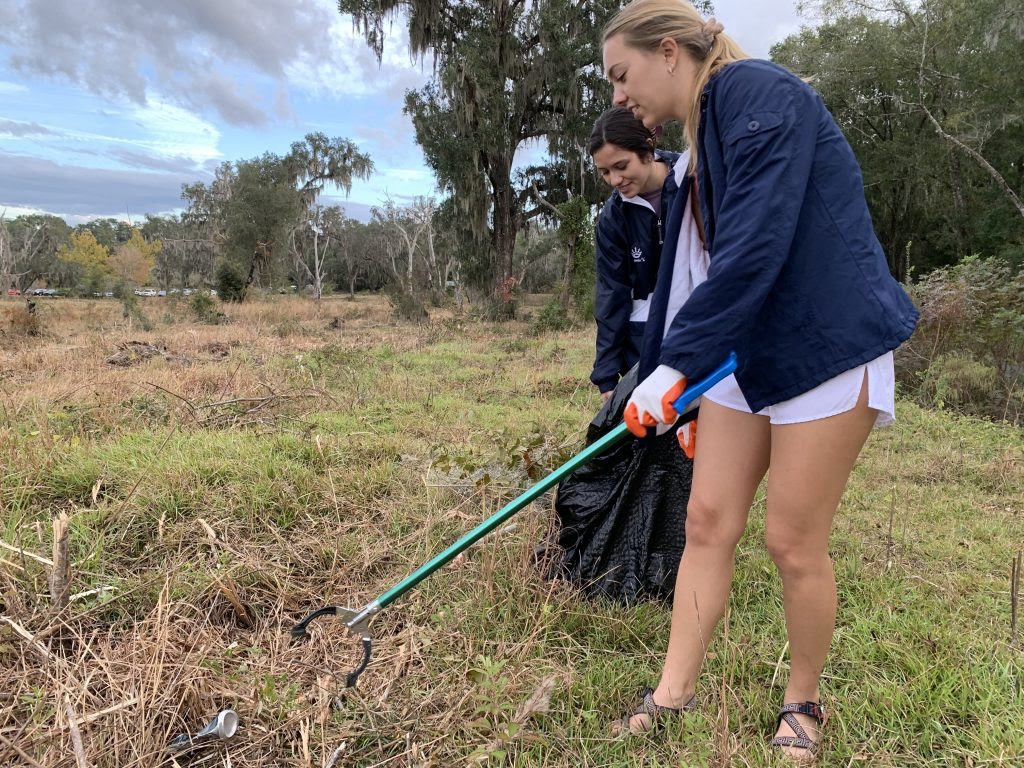 Hayden Henke, a sustainability studies sophomore at the University of Florida, picks up a can that’s been littered on Hawthorne Trail in Gainesville while Victoria Valledor, a public relations sophomore at the University of Florida, holds a trash bag for Henke. The two attended a cleanup hosted by UF’s #UNLITTER organization on Nov. 11. (Abigail Hasebroock/WUFT News)

Tom Strickland, the recycling coordinator for the city, said because plastic water bottle caps are so small, they are liable to fall through the belts that move materials through the recycling process. The caps are also made from a harder plastic than the rest of the bottle, he said.

Though clean caps can be reused by The Repurpose Project or the Gainesville Women’s Club, most are discarded and end up in landfills; the mural aims to eliminate some of this waste.

The #UNLITTER team is collecting more than bottle caps, too. Schwab said they will take anything from jam jar lids to mayonnaise container caps.

Shannon Sawtell, the director of the organization, said the organization is also looking to create partnerships among some Alachua County Public Schools to raise awareness about environmental issues and collect more caps through drives to fill the mural.

“We need several thousand, and a lot of our members are zero waste, so it makes it a little more difficult, but we’re very excited,” she said.

Given how spread out the collection is, Sawtell said the estimate of 1,000 caps is fluid.

The hope is for the mural to be displayed this summer.

“We’re very lucky to be in Gainesville, which is an area that’s very accepting of all of these environmental movement projects,” Sawtell said. “I could see that being a barrier in some bigger cities, or some cities that aren’t as welcoming, but we’ve been very lucky.”

MS US Christelle Awa From Congo Crowned Winner of African Most Beautiful USA Beauty Pageant. Nationwide — It was a night of bliss, fashion, music, and great African cultural performances at the maiden launch of the much-anticipated African Most Beautiful USA beauty pageant. Christelle Awa, representing the Democratic Republic of the Congo, was announced as the 2021 winner. Read More…