Benjamin Banneker: A Monumental Effort for A Black Hero, 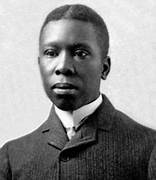 Here is a valentine of sorts from a couple of “she-ros,” District historian Louise Hutchinson and community activist Peggy Seats. They have been trying to erect a monument in the nation’s capital to Benjamin Banneker, America’s first black man of science, whether they get help from the rest of us or not.

In 1971, after several years of lobbying, Hutchinson persuaded government officials to change the name of the 10th Street Overlook, a circle near L’Enfant Plaza, to Benjamin Banneker Overlook Park.

During the past 30 years, Hutchinson has tried to raise money for a memorial and visitors center that she hoped would be constructed at the site.

So much time has passed without much progress, however, that the vacant site has now caught the attention of fans of former president Ronald Reagan. In virtually no time, by comparison to the decades-long Banneker effort, the Reaganites have raised nearly $40 million to build a monument there to the Gipper — who already has an airport and at least two buildings named after him.

Three years ago, Seats joined Hutchinson’s effort. She, too, believes that Banneker, as a principal surveyor of the nation’s capital, deserves to be memorialized in the circle named for him.

Seats founded the Washington Interdependence Council, a nonprofit civic organization, to garner support for a monument to Banneker. But much of her time has been spent warding off efforts to move the proposed Banneker memorial farther down the L’Enfant promenade, to make way for the Reagan monument.

Unfortunately, Seats and Hutchinson have not been able to rally much support, or money, for the memorial, which has made it more difficult to convince planning officials that Banneker really matters to anyone but them.

“You wouldn’t think it would be this difficult getting a memorial to a black man in a predominantly black city,” Seats said. “It didn’t take long to get a memorial to Ghandi erected outside the Embassy of India, or to get a Japanese American war memorial put up near the Capitol. When it comes to recognizing and valuing history, every constituency seems able to rise to the occasion except ours.”

The National Capital Planning Commission’s memorials and museums master plan, released in December, now refers to Banneker Park by its old name, the 10th Street Overlook. And it includes an artist’s rendering of a Banneker statue on the promenade — not inside the circle overlook.

In a section of the master plan about the future of the Banneker memorial, two words in fine print say it all: “potential displacement.”

And so it goes.

“It’s a little disheartening to look at all the effort that has gone into this and not see it come to fruition,” said Hutchinson, who is 74. “There is no grass-roots awareness in this city. And when you try to raise money, you start to feel like a nuisance. People look at you, like, ‘Oh, my God, here she comes again.’ ”

(It should be noted that, according to Hutchinson, Elwood R. Quesada, the developer of L’Enfant Plaza, agreed to support her request to change the name of the overlook after being asked to do so by then Washington Post publisher Katharine Graham.)

Hutchinson, who once worked as an assistant to Mary McCleod Bethune in Northwest Washington, said she was taught by the great educator that valuing history was the best way for a people to chart a course for the future.

Banneker’s scientific accomplishments, Hutchinson felt, had special significance for African Americans, who had long been stereotyped as intellectually inferior.

“He was a genius who made a tremendous contribution to American life, especially the nation’s capital,” Hutchinson said.

Born free in 1731 in Maryland, Banneker used astronomy skills gleaned in part from his West African grandparents to help him precisely survey the 10 miles square that would become the nation’s capital.

At age 22, he used a knife to construct from wood the first clock made in the Americas. It struck the hour accurately for the next 50 years. Banneker was also a mathematician, astronomer and author of almanacs.

The project, if completed, would feature a clock tower and an overpass linking Banneker Circle with the Southwest waterfront. This would make the site a gateway from the Mall to the Washington Channel for millions of tourists.

Hutchinson, meanwhile, remains hopeful even as she watches opportunities to build the memorial slip away.

“I’ve been seeing all of these limousines,” she said, refering to the presence in Washington of the well-heeled attendees for today’s National Basketball Association All-Star Game and related galas.

She knows the money to build a memorial is out there.

“I see the gold chains, the pumped-up tennis shoes and the baggy pants, which speaks loudly of a misguided value system,” she added. “Do we really want our children to believe that those things represent success?”

To Seats, Banneker’s Colonial-era accomplishments ought to be a matter of pride for all Americans, not just blacks.

“We would be grateful if anybody who is in a position to help would step forward,” she said.

Army Veteran, Destiny Nicole Monroe, 32 years young, is the owner of Raw Fitness, a Black-owned gym and fitness center located in the Dallas, Texas area. As a certified strength and conditioning specialist, this former Army Veteran and software engineer already has more than half a million followers on Instagram (@DNicoleMonroe) and now offers online Read More…

The Washington Football Team, formally known as the Washington Redskins, has appointed Jason Wright as team president. He is the first African American in NFL history to become a team’s president. In this role, Wright will be responsible for leading the organization’s business divisions, including operations, finance, sales, and marketing. He will join Coach Ron Read More…

One on One Prenatal Yoga Magic: Powerful, Peaceful Journey Within

By Jill Douglas Prenatal Yoga Magic: The Word yoga is Sanskirt for yolk or union, The body, mind, and spirit are united in this ancient practice of postures through the bridge of the breath. Prenatal yoga is also a holistic experience for pregnant women. Not only is it good for mom, but it can also Read More…