A burly burlesque comedian, raucous Pigmeat Markham starred in dozens of classic sketches including “Here Come De Judge.” He played the world’s funkiest judge: “The judge is high as a Georgia pine! Everybody’s goin’ to jail today! And to show you I don’t mean nobody no good this morning, I’m givin’ myself six months! And if I’m gonna do six months, Mr. District Attorney, you can imagine what you’re gonna do!” 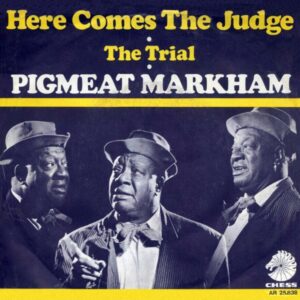 Born in Durham, North Carolina, Markham began his show biz career as a tap dancer before breaking into the “T.O.B.A.” circuit of black vaudeville. He was in the “Sugar Cane Review” in 1925 and through the late 20’s and the 30’s played in many more variety shows perfecting his tried-and-true sketches. In 1935 he journeyed to The Apollo Theater in New York, sometimes appearing on the bill every week for an entire year. His nickname came from a character in an old vaudeville routine: “Sweet Papa Pigmeat, with the River Jordan at my hips, and all the women is just run up to be baptized!”

Pigmeat played “Alamo the Cook” on the brief run of the Andrews Sisters’ radio show, and made films that circulated mostly to black movie houses. In the 40’s, a time when “Amos and Andy” was popular on radio and snappy burlesque sketches were being adapted to film by Abbott & Costello, audiences enjoyed hearty belly laughs at Pigmeat’s “low” comedy and didn’t worry about any possible “stereotype” behavior in his renditions of “Open the Door, Richard” and the rest of his classics. Into the TV era, Pigmeat guest-starred on “The Ed Sullivan Show” bringing his lively humor to a new generation. He issued many record albums, though they could only hint at the kind of broad gestures and costumes that were making the audiences crack up even on the straight lines.

Markham’s national fame took hold after Sammy Davis Jr. popularized the old “Here Come De Judge” catch-phrase on “Rowan and Martin’s Laugh-In.” Davis brought Pigmeat to Vegas with him for a $5,000 a week taste of big-time success. A novelty tune version of “Here Come De Judge” became a Top Ten hit for Shorty Long and was then covered by Pigmeat for a Top Twenty success. He went on to issue more albums that revelled in the funky black dialect though now there were more and more people in the audience feeling some embarrassment about his brand of broad ethnic comedy.

George Kirby wrote the notes for Markham’s “Here Come the Judge” album and praised the old veteran: “This comic was one of the few greats who walked in the back door so that we young comics of today could walk in the front, and thank God he has a chance to walk in the front with us…Pigmeat Markham is the greatest.”

Markham appeared on TV variety shows but was most popular in live concert dates for predominantly black audiences. “Here Come De Judge” had brought him fame—now he could enjoy some of the fortune, collecting star billing and star payments when he toured. Living in semi-retirement at home in New York, he was even called upon to lecture on comedy and the golden era of vaudeville.

Dewey Markham, a comedian who performed on both the black and white vaudeville circuits and was best known for his skit called ”Here comes the judge,” died Sunday in Montefiore Hospital in the Bronx after suffering a massive stroke. He was 77 years old and lived in the Bronx.

Pigmeat Markham, as he was known, was cited by Langston Hughes and Milton Meltzer in their book, ”Black Magic: A Pictorial History of the Negro in American Entertainment,” as one of the ”golden dozen” black comics.

Born in Durham, N.C., Mr. Markham started performing in the South, working in carnivals and medcine shows as a dancer and comedian. In the mid- and late 1920’s he came to New York, performing at the Alhambra Theater and then the Apollo Theater with his straight man, the late George Wilshire. In Minstrel Tradition

His comedy stemmed from the minstrel tradition. In the ”Black American Reference Book,” edited by Mabel Smythe, Langston Hughes wrote: ”For a long time most black comedians felt that in order to be funny, they had to work under cork. The strangest paradox of them all was Pigmeat Markham, one of the funniest and most popular of black comedians. For years on stage his makeup was burnt cork. When changing times after the second World War caused him to stop blacking himself up, his audiences were amazed to discover that in reality Pigmeat was himself darker that the burnt cork he had been using.”

Mr. Markham believed that comedy was important to black people and his specialty was making fun of everyday situations. In later years he traveled worldwide and appeared on television as a guest of Ed Sullivan, Johnny Carson, Mike Douglas and Merv Griffin and on the ”Laugh-In” shows. He made 16 record albums.

Mr. Markham is survived by his wife, Bernice; a son, Dewey, and a daughter, Cathy. The funeral service will be held today at 7:30 P.M. at Benta’s Funeral Chapel, St. Nicholas Avenue and 141st Street

FRITO-LAY is subsidiary of PEPSICO, INC., makers of Pepsi-Cola, Frito-Lay sells $12 Billion a year of products that include: Lays Potato Chips Doritos Tostitos Cheetos Fritos You might not associate these mostly fried snack foods as being good for you, but the FDA has no problem allowing the Frito-Lay website to state the following: “Frito-Lay Read More…

A report published in the Journal of Nutrition describes protective benefits of green tea polyphenols against ultraviolet light – induced skin damage, as well as an ability to improve skin elasticity and density. Sixty women were assigned a green tea beverage or a control beverage daily for twelve weeks. Before the treatment period and at Read More…

What’s better than one Black future billionaire? Two. Tech star Angel Rich is having the best year ever. On July 11th, the Black wealth visionary got engaged. “I was speechless for at least 3 minutes,” she said. The Hampton Alum, who has maintained a private personal life, says that she is very excited to announce Read More…

Meet the Black Educator Whose Workbooks Are Being Used in Ghana, Haiti, Mexico and South Korea