Republican Lauren Boebert looking like an Extra from and Western DVD. 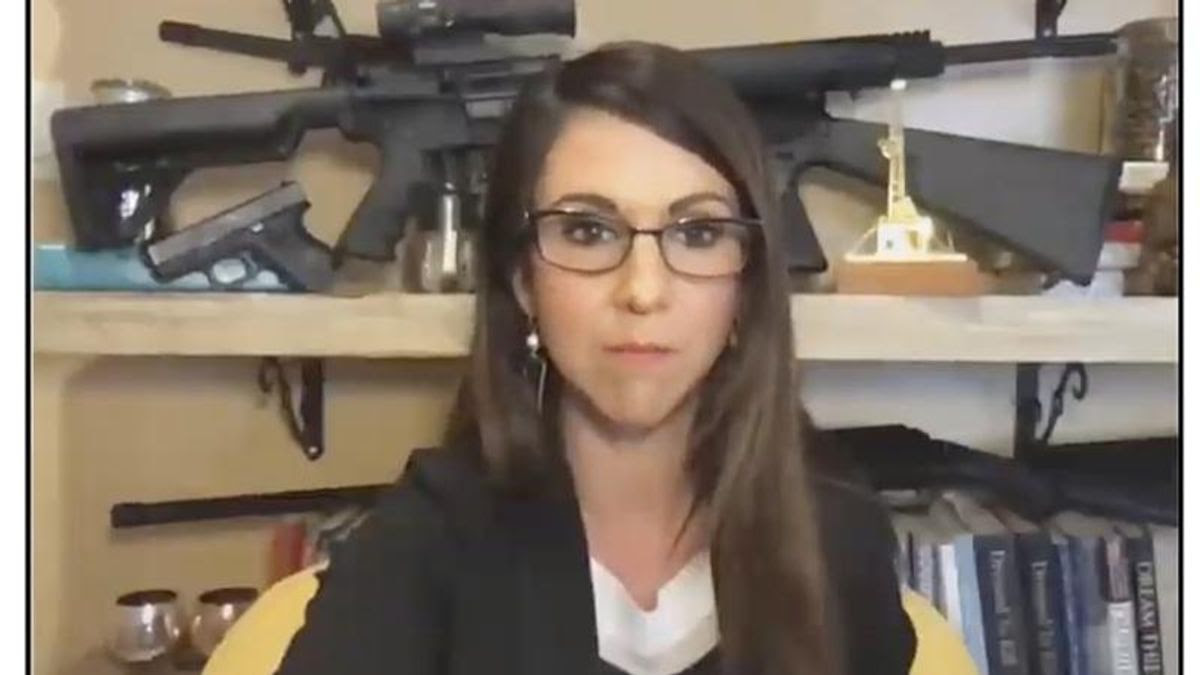 The emerging paramilitary wing of the GOP

It’s campaign season, which means Republican candidates for office wielding weapons and threatening to use them.

J.R. Majewski, a Republican candidate for Congress in Ohio, ran an ad (since taken down for copyright issues) in which images of President Joe Biden, Minnesota U.S. Rep. Ilhan Omar and Colin Kaepernick (?!) are flashed on the screen, and then Majewski casually walks around with a rifle and says he’ll “do whatever it takes to return this country back to its former glory.”

Blake Masters, the Trump-endorsed U.S. Senate candidate in Arizona, builds his own guns and recently showed one off on social media with the caption: “I will remind everyone in Congress what ‘shall not be infringed’ means.”

From Arizona, where state Sen. Wendy Rogers spoke approvingly of hanging political enemies at a white nationalist rally, to Oklahoma, where the GOP chair and candidate for Congress talked about putting Anthony Fauci in front of a firing squad, Republicans are frequently musing about committing violence against their political opponents.

Closer to home, Scott Jensen, the likely GOP nominee for governor, has twice called for Secretary of State Steve Simon to be imprisoned, echoing Donald Trump’s caw of “lock her up” about Hillary Clinton. Simon was the victim of an antisemitic attack by his presumptive Republican opponent Kim Crockett, who proceeded to seemingly laugh off the apology offered by the state Republican Party on her behalf.

Although the wink-and-nod calls for violence have become more extreme and florid in recent years, the roots of this political pathology lie not with Trump and his red hats, however.

America has a long history of political violence, often — though not always — rooted in white supremacy. As Jelani Cobb recounted in 2020, the American Party, aka the “Know Nothings,” were infamous for their bludgeoning mobs, particularly against immigrant voters.

The brutal caning of abolitionist U.S. Sen. Charles Sumner by U.S. Rep. Preston Brooks on the floor of the Senate in 1856 was just the most infamous attack during a time when physical combat in the U.S. Congress was shockingly common, as historian Joanne Freeman records in “The Fields of Blood.” Between 1830 and 1860, there were more than 70 violent incidents in House and Senate chambers, on nearby streets and — yes, this is real — ”dueling grounds.”

In the Jim Crow era, civil rights advocates who tried to register voters in the South were terrorized and murdered.

In the present, when Sharron Angle was running for the U.. Senate against Democratic Sen. Harry Reid in Nevada in 2010, she said something that sounded ominous: “I’m hoping that we’re not getting to Second Amendment remedies. I hope the vote will be the cure for the Harry Reid problems.”
She seemed to be turning Abraham Lincoln’s “ballots are the rightful and peaceful successors of bullets” on its head.

Owing to her general level of dunderheadness, Angle was viewed by national politicos as a bit of a loon, a western oddity, and Reid dispensed with her by 40,000 votes, and we all moved on.

Dismissing Angle was a mistake. For millions of Americans, her “Second Amendment remedies” comment was not beyond the pale. Far from it.

This notion among some gun rights activists and their allies on the right is so ingrained as to be almost banal.
Writing in the conservative journal National Review eight years later, David French spelled out the argument in detail while defending the right of Americans to collect arsenals of high powered weaponry: “Citizens must be able to possess the kinds and categories of weapons that can at least deter state overreach, that would make true authoritarianism too costly to attempt.”

What if this is backwards? Well-armed partisans emerge as the paramilitary wing of authoritarian parties, using violence and the threat of violence to vault the movement to power.

As Michael Dolan and Simon Frankel Pratt have written in Foreign Policy, fascism entails, among other things, the “growing union of right-wing party politics and paramilitary street violence.”

The recent hearings of the House Select Committee to Investigate the Jan. 6 Attack on the U.S. Capitol have highlighted the role of the paramilitary wing of the Trumpist movement in the coup attempt, including the Oath Keepers and Proud Boys, a group also represented at the State Capitol in St. Paul on the same day.

The same type of Republican politicos who wave guns around in their public appeals for votes have defended the violent attack on the Capitol, which remember included a failed attempt to capture or kill former Vice President Mike Pence.

Members of Congress — people who serve with colleagues whose lives were in danger on Jan. 6 — have referred to the insurrectionists as “political prisoners.”

They are absolving the newly emergent paramilitary wing of the GOP.

You may ask: Whatabout the guy who showed up in Supreme Court Justice Brett Kavanaugh’s neighborhood with a gun intending to kill Kavanaugh before he called 911 on himself? Or the man who shot Rep. Steve Scalise five years ago Tuesday? Or the killing of Aaron Danielson in Portland during the tumultuous summer of 2020? Or the arsonists who sacked and burned down the Third Precinct?

These are concerning examples, but they don’t constitute the formation of an organized paramilitary wing of the Democratic Party.

When hundreds of thousands of women in pink hats marched in Washington, no one feared they might storm the Capitol.

What’s astounding — a touch laughable even — is the idea that these right wing militants would take up arms against a government led by … President Joe Biden or Gov. Tim Walz. These men want to increase taxes a little on the rich, give some money to the poor, and maybe do a little something about global warming. Mostly, they want to be liked.

People who seek to take up arms against these men are like Walter Sobchack in “The Big Lebowski” pulling a gun on the pacifist Smokey because he stepped over the line during a bowling league match.

This has nothing to do with Vietnam, Walter.

Just as likely, they’ve been used, conned by Fox News for ratings and by Trump, who collected $250 million for his fake “Election Defense Fund” from small donors convinced the election had been stolen.

As with Sharron Angle, however, we can’t laugh off all the menacing rhetoric, or the politicians playing gun cosplay, or the failed coup.

Boy from Mars: This Russian Boy Said He’s A Martian – And Claimed Earth Will Be Decimated By An Apocalypse. Boris Kipriyanovich first came to the world’s attention in an extraordinary story published by the Russian newspaper Pravda. And what a debut it was. In October 2005, when he was just nine, the publication sensationally revealed Read More…

Former President Donald Trump has filed a sweeping RICO lawsuit against Hillary Clinton, the Democratic National Committee and others, alleging that they “maliciously conspired to weave a false narrative that [Trump] was colluding with a hostile foreign sovereignty [Russia]” to try and rig the 2016 election. “The Defendants, blinded by political ambition, orchestrated a malicious Read More…

Everybody Eats, No Questions Asked at This Donations-Only Black-Owned Restaurant owners Freddie and Lisa Thomas-McMillan display classic Southern hospitality. With their business philosophy, “Feed the Need,” they operate on a donation-based system without turning anyone away reports Good News Network. Guests from all walks of life can come in and enjoy southern cuisine served family Read More…