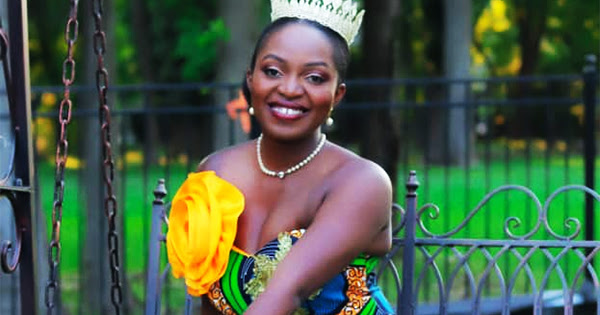 Nationwide — It was a night of bliss, fashion, music, and great African cultural performances at the maiden launch of the much-anticipated African Most Beautiful USA beauty pageant. Christelle Awa, representing the Democratic Republic of the Congo, was announced as the 2021 winner.

The pageant is organized by the Abofrem Area Foundation, Inc. with the goal of celebrating the diverse and beautiful cultures from all parts of the African continent in the United States of America.

With a first-place car, crown, and cash prize up for grabs, nine lovely and eloquent African ladies graced the stage at the Ritz Theatre in Elizabeth, New Jersey on the night of September 4th representing various African countries showcased their respective talent, poise, and intelligence in order to educate those in attendance about the fascinating cultures of Africa.

Ahead of the main show, the glitz and glam came alive on the red carpet as patrons trooped in to experience the first showing of the African Most Beautiful USA beauty pageant. Among the honored guests interviewed on the red carpet were Koo Fori, Ayisha Modi, Counselor Lutterodt, Pope Skinny, Joy Industries CEOs, traditional leaders, and many others.

The first-ever African Most Beautiful USA main show began with individual presentations from the contestants wearing colorful and unique costumes that celebrated the African countries represented, including Ghana, Nigeria, South Africa, Egypt, among others. Later in the pageant, the same contestants showed off their special talents to impress the judges and entertain the cheering people in the audience.

It was also a night of entertainment as musicians, such as Kofi Kinaata, Stonebwoy, Kwaw Kese, and others, delighted the appreciative patrons with their varied Afro-beat songs that got everyone on their feet to dance each time they came on stage.

In the end, the judges and voters decided on the three finalists. Not only was Christelle Awa announced as the 2021 winner, but she was also awarded a crown, a cash prize, and a car. Priscilla Assifuah, representing Mauritania, was the First Runner-up, and the Second Runner-up title went to Hannah Agyapong who represented Ghana. All participants received gift bags and many accolades for making this a most memorable event.

After the event wrapped up, the CEO of Abofrem Area Foundation, Nana Akosua Nkrumah Adasa III (Nkawie Abofrem Hemaa) declared that she was very grateful to all involved for making this first-time pageant a most successful one and promised that an even better pageant was in the offing for 2022.

She commented, “We have all witnessed this spectacular show of our beautiful African culture, its great values, and quality entertainment. We at Abofrem Area Foundation are looking to continue to use this type of event to promote the story of our rural African areas and raise funds to help better these communities’ development. We will be back stronger and better next year to tell the world our African stories. Well done to my team and everyone who supported our dream in one way or another. See you all again next year!”

Registration has already begun for next year’s pageant, and the deadline is January 15, 2022.

Learn more about the pageant at AfricanMostBeautifulUSA.com

I am still hers. I am still hers. Its best to receive our African Ancestors as they appear.  I’ve learned it’s best not to try to control how the memories of my mother show up, or what emotions they are wearing when they enter. This one is dressed in a rare crossbreed of inconsolable laughter Read More…

A new study suggests that among people who have chronic obstructive pulmonary disease (COPD), taking a high-dose supplement of vitamin D may increase their exercise capacity and strength of respiratory muscles. The findings, which were presented at the recent American Thoracic Society conference in Denver, show that a monthly dose of 100,000 IU (international units) Read More…