Marc Lore’s,  Billionaire ex-Walmart exec says the first ‘settlers’ of his planned $400 billion city ‘Telosa’ will likely be selected through applications — and they could move in by 2030. 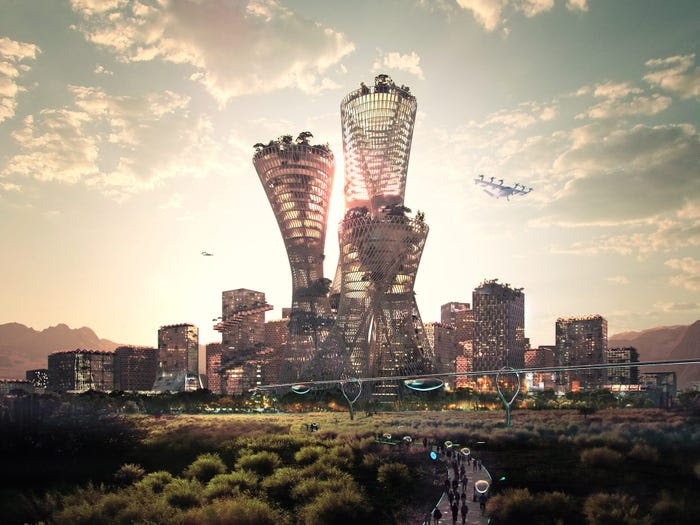 A rendering of Telosa, including the “Equitism Tower.” BIG and Bucharest Studio

Lore, who stepped down as the CEO of Walmart’s US e-commerce division earlier this year, announced last month that he plans to build a futuristic city known as Telosa. Telosa — which gets its name from an ancient Greek word meaning “highest purpose” — plans to offer its citizens equal access to education, healthcare, and transportation. Residents would get around in autonomous vehicles, and the city would run on renewable energy, Telosa’s website promised.

While citizens of Telosa would be able to build their own homes and sell them, the city would maintain ownership of the land itself, Lore told USA Today’s Scott Gleeson on Sunday. He called his vision for the city “equitism” — a mashup of equality and capitalism.

“The sole purpose of creating a city in the desert would be so it’s owned by the community, basically take all the appreciation of the land and give it back to the citizens,” Lore told USA Today. “Taxes paid will go back to the city for infrastructure — roads, tunnels and bridges — so everyone would know exactly where their money is going.”

It’s an ambitious endeavor, and an expensive one: The city’s website estimated the first phase would cost $25 billion, with the total cost of the city surpassing $400 billion. It would be funded by investors and philanthropists, as well as government grants and subsidies, the Telosa website said.

There’s no set location for Telosa just yet, but a few regions have been mentioned as possibilities: Nevada, Utah, Idaho, Arizona, Texas, and the Appalachian region, which includes 13 states in the eastern part of the US. 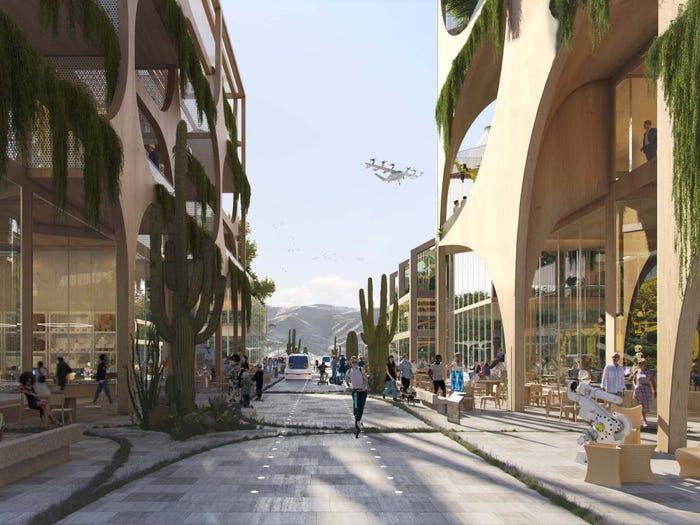 A rendering of the streets of Telosa. BIG and Bucharest Studio

The first phase of Telosa — stocking the city with 50,000 residents by 2030 — would likely include an application process, Lore told USA Today.

“Settlers” of the city would be chosen via a selection process focused on diversity and inclusion, he said, and he’s working to determine the criteria with the help of a team of staff and volunteers that includes architects, economists, engineers, and climate experts.

Lore told USA Today that he also plans to build a venture-capital fund for startups willing to relocate to Telosa.

In renderings of Telosa created by the prestigious Danish architectural firm Bjarke Ingels Group, the streets are filled with robots and autonomous vehicles; there’s a high-speed rail system; and a futuristic skyscraper — dubbed the “Equitism Tower,” USA Today reported — dominates the skyline.

Telosa may be Lore’s most radical undertaking to date, but he has a long history of entrepreneurial projects. In 2005, Lore cofounded Quidsi, the parent company of Diapers.com, which he sold to Amazon six years later for $500 million. After a short stint at Amazon, Lore founded Jet.com, an e-commerce competitor that he sold to Walmart in 2016 for $3 billion in cash, plus stock. He served as Walmart’s US e-commerce CEO for over four years, announcing in January that he was leaving to focus on building “a reformed version of capitalism,” he told Recode at the time.

Like fellow tech billionaires Mark Cuban, Steve Ballmer, and the late Paul Allen, Lore has also gotten involved in the world of professional sports: In July, Lore and former Yankees star Alex Rodriguez teamed up to purchase the NBA’s Minnesota Timberwolves and the WNBA’s Minnesota Lynx.

by Ava Janae Johnson It’s “AVA’S PROSPECTIVE – The Devil Power” It was not the devil it was you. Why give power, recognition, and credit to a fiend that cannot overpower the God within you? Take responsibility for your wrongdoings. Stop blaming your wrongdoings on the tempter for being tempted. You have the power to Read More…

By GRACE The Wholistic Belief & Mind Powers: Concept of Health throughout history, humans have struggled within mental prison of their own making. The legacy of judgment, misunderstanding, and distortion befalls incoming humans immediately, crippling them through the well-intended but unenlightened actions of parents. At present the human experience is but a pale comparison to Read More…

The parents of the student whose dreadlocks sparked the case vowed not to cut her hair. The highest court in all of Jamaica ruled on Friday in favor of a school that demanded a student cut her dreadlocks over “hygiene” reasons in order to attend classes. The student’s parents vowed not to cut their daughter’s Read More…

Meet the Black Educator Whose Workbooks Are Being Used in Ghana, Haiti, Mexico and South Korea