“He was able to play all four quarters,” Eastern coach Travis Wray said. “He’s not been able to finish one game due to cramping or different things because he’s playing both sides of the ball in all three phases.

“But now we’ve gotten some guys healthy and up to speed defensively, so James had to play just three plays on defense and was able to carry the ball 33 times. Staying fresh, he was able to be the workhorse we want carrying the ball 25 times a game minimum. We hadn’t come close to that yet.”

Lewis single-game yardage effort topped the mark shared by the legendary Caleb Hamilton and Lewis’ position coach, Jeff Graham. The TD total tied the record Hamilton held. It recalled the hey-day of the T-Birds: a 322-yard six TD effort by Hamilton vs. Springs Valley to begin the 2017 season or the 335-yard night Graham had in a playoff win over South Decatur.

Eastern finished 511 rushing yards as a team, with all eight TDs coming on the ground. Evan Ferkingstad added 140 yards and quarterback Jonas Hawk had 37, along with nearly 100 yards passing.

Up front, left tackle Kendall Britton, left guard Darrel Burton, center Landon Henderson, right guard Bryce Teague and right tackle Cole Adams paved the way. It’s a crew that’s found stability and is getting more help on the defensive side so they had fresher bodies, too, in the second half as Eastern pulled away from a 21-6 lead.

“We don’t have as many guys going both ways,” Wray said. “They had limited reps, so they were not gasping for breath late in the second half, we can put together four quarters of moving people all night.

“It’s the first time it’s been the same five in back-to-back weeks and they took every snap.”

One of Wray’s few complaints is that his T-Birds could never quite get to the point where a running clock could click in.

“Defensively, we did want we wanted to within new parameters,” Wray said. “It was just teaching them how to play with a big lead. Mitchell didn’t go away and it was always a little too close for comfort.

“We got up and you saw guys taking plays off.”

There will be no taking plays off next week as Eastern faces a Clarksville team (1-3) that’s lost to three undefeated teams and features running back Robert Lamar, who ran for over 2,000 yards last year over 11 games. 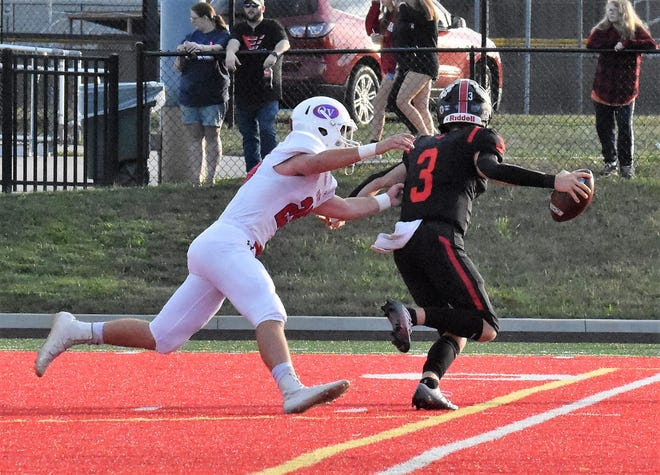 There’s no drought for Edgewood when it comes to injuries.

The Mustangs found out this week that Andrew Good is done for the year with his broken thumb needing more time to heal. Now add receiver/kicker Ziggy Teran to the list with what may end up being a fractured ankle. Both are baseball players. Lineman Evan Dodds is out and the Mustangs also patiently await the return of lineman Logan Anderson, who hurt himself twice before the opener.

It may end up forcing head coach Caleb True to shuffle the lineup and offensive formation.

“We might look like the old flexbone we had last year,” he said. “Double tights and get our running backs running downhill. We need to be more two-dimentional, running outside with Gabe Drew and inside with Gunner (Caswell) and Stan (Oliver).”

Speaking of Caswell, he has picked up Teran’s placekicking duties, hitting the only extra-point try Edgewood had Friday.

Edgewood (1-3) needed to find a way to slow down an offense that is averaging 58 points per game and instead tossed gasoline on the fire with five turnovers in a 57-7 loss. Edgewood’s defense started the game by forcing a fumble, but an interception got the ball rolling in the wrong direction as OV went up 23-0 by the end of the first quarter.

“It’s a pass that Beef (QB Jacob Murphy) normally throws to Grant Coffey pretty well, but he underthrew it and it got picked off,” True said. “We had guys fumbling who don’t, guys who are our guys out there. When you’re playing OV, you can’t turn the ball over.” 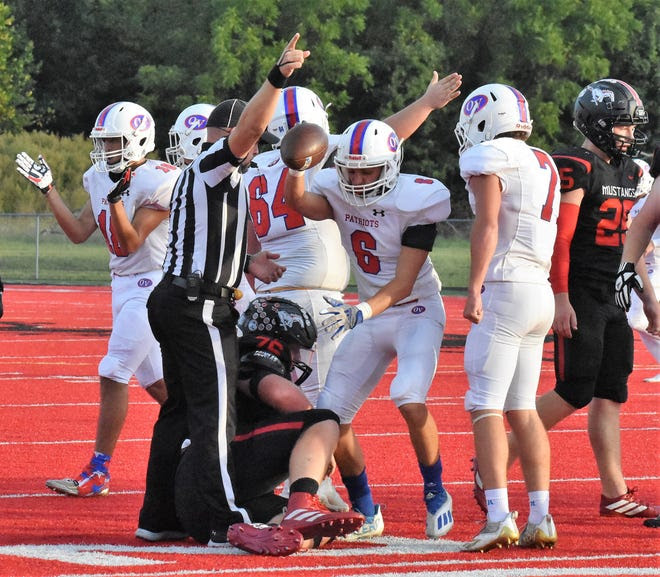 Nor can a team not match the Patriots’ physicality. OV took advantage of Edgewood’s weaknesses up front, blitzing at well and bringing great pressure up the gut.

“We were timid up front,” True said. “We were not drive blocking like we should be. That’s definitely on our checklist this week.”

And the next three, with South Putnam followed by Indian Creek, Sullivan and Northview.

Bloomington South’s Week 8 foe Seymour came up with a dramatic win Friday at Floyd Central. The Highlanders took a 15-14 lead with 1:20 to go on a 43-yard field goal, but the Owls (2-2) came up with a 31-yard touchdown pass at the very last second to pull out the Hoosier Hills Conference contest. … Terre Haute South’s Josh Cottee ran for 187 yards and scored a school record six touchdowns, five rushing, one receiving, in a 56-35 win over Terre Haute North. The series has been a close one, with THS winning 11 of the last 20. Braves are at Bloomington South this week. … Bloomington South enlarged its lead in its series with North to 47-14. It was the 29th time the Panthers have held North to single digits

“MelaninPeople” – A Social Media App for the Black Community

Created by Adeyinka Adegoke, MelaninPeople is a social networking app designed to connect a range of Black and brown individuals, businesses and professionals. Nationwide — MelaninPeople is a social media app that aims to connect Black and brown people within one convenient media network. The platform connects black people worldwide to increase socio-economic awareness and Read More…

While we may not be going to church in the traditional sense, we are gathering together in unique spaces, both in person and online. -Meagan Jordan  TWEET THIS Washington Post columnist, Christine Emba, published a piece on Oct. 27, titled Why millenials are skipping church and not going back. Emba declared millennials were interested in gaming, ambitiously Read More…