For over 25 years, Gloria Jefferson Anderson researched her father’s side of the family, trying to figure out what happened to her ancestors once slavery ended.

“When I found out where my father’s people were on the plantation – the next question was, ‘Well, where are these people buried?” said Anderson, 74, a Tallahassee resident.

Anderson’s quest for her past led her to New Hope Cemetery in Tallahassee, a historic African-American burial gound believed to hold the graves of former slaves from Welaunee and Fleischmann plantations in Leon County. This site, where no graves are marked and there are no headstones, is located behind Testerina Primitive Baptist Church, which Anderson had coincidentally been attending her whole life, along with many of her neighbors. 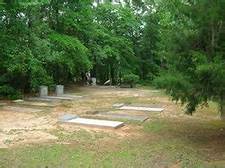 In Tampa, archaeologists confirmed in 2019 that a historic African-American cemetery’s graves had not been exhumed before the land was developed. Under some warehouses, public housing and a tow lot remained the burial sites of Zion Cemetery.

Zion has received a lot of media attention and action from local officials seeking to safeguard the graves and honor those buried there, but New Hope Cemetery — virtually in the state Legislature’s backyard, only seven miles from the Capitol — has received far less.

Last year, Gov. Ron Desantis approved the creation of the Task Force for Abandoned Florida Cemeteries, which held public meetings around the state during the summer and fall to produce a 200-page report earlier this year. Sen. Janet Cruz said last year that there are nearly 3,000 abandoned African-American cemeteries in Florida that have not yet been identified, according to estimates by state archaeologists.

Now, a pair of bills aims to enact the task force’s recommendations and prohibit or limit development on abandoned grave sites. The House bill was making steady progress through the final weeks of the legislative session, but its companion bill in the Senate has been stalled since January, threatening to imperil the efforts.

“There was a time in our state when even cemeteries were segregated,” Rep. Fentrice Driskell, D-Tampa, one of the sponsors, along with Cruz, D-Tampa, said during a House Infrastructure and Tourism Appropriations Subcommittee meeting earlier this month.

“Historically, African American cemeteries were not subject to regulations, upkeeping and other necessary efforts to uphold the dignity of the deceased, compared to their counterparts,” she added. “Moreover, the lands on which African-American cemeteries were contained, at times, were sold without any regard to who was buried there.”

In November 2019, Anderson and her brother, Elder Wilbert Jefferson Sr., decided to walk a trail behind the Testerina Primitive Baptist Church. Her brother spotted some depressions in the ground. There were no grave markers or headstones, but Anderson knew she had found something.

“I came home and I looked at my father’s picture and cried,” Anderson recalled about her father, Fred Jefferson, in an interview. “I said, ‘Dad, I’ve found your people.’”

A regular attendee of the Tallahassee Historical Society Meetings, Anderson connected a few years ago with Lonnie Mann, a member of the Panhandle Archeological Society in Tallahassee. He organized a cadaver canine survey in an attempt to confirm the presence of human remains along the trail behind the church in 2020.

Mann’s survey indicated that burials were likely in the area, according to the task force’s final report. That finding spurred the state Division of Historical Resources to create new boundaries for New Hope Cemetery and recommend the site be protected and preserved.

Mann said the state did two additional cadaver dog studies and outlined an area near the church of about seven acres that might hold graves.

Since then, Anderson formed the New Hope Cemetery Project Committee and has been collecting oral histories and historical records from the local community in an effort to identify and memorialize those who may be buried there, including the ancestors of members of the nearby St. Peter Primitive Baptist Church – Anderson’s home church.

Anderson said she is glad to have found New Hope Cemetery before it was desecrated by development.

“There’s so much information in the news about finding these cemeteries in homes and parking lots and schools, and everything being built on top of them,” Anderson said. “Well, I think we caught this one before … we were able to save the cemetery.”

Anderson and Mann hope it stays that way.

“We would like the city to develop some form of protection, either as an easement or some sort of agreement with descendants that would perpetually protect the cemetery from development or any use other than that of a cemetery,” Mann said. “The right mechanism for protecting cemeteries is one of the questions that we’re dealing with.”

The legislation under consideration would create the Office of Historic Cemeteries within the Department of State and it would focus on restoration, research and maintenance efforts for all abandoned cemeteries, not just African-American sites. The office would be staffed with three full-time employees at an estimated cost of $200,000 a year.

As an indication of the measure’s broad support, Rep. Jayer Williamson, a Republican from Santa Rosa County who chairs the subcommittee, congratulated Driskell on her efforts.

“It’s been a labor of love over the last two years, and (it’s) good to get this thing moving,” Williamson said at the subcommittee meeting.

“It’s sad to say that we were forgotten people, and that’s basically what transpired in many African-American cemeteries back at home,” Hart said.

Like Jefferson, Driskell recognizes the power of knowing your own history.

After months of feedback and fine-tuning, the Federal Aviation Administration today issued its final versions of safety rules for drones that fly over people and at night — including the drones that Amazon is developing to make package deliveries. “The new rules make way for the further integration of drones into our airspace by addressing Read More…

Black Wall Street:  The Forgotten Women The neighborhood attacked in the Tulsa Race Massacre was known as a Black intellectual and financial mecca. Women were a little-known part of its success. By Brentin Mock Brentin Mock is a writer and editor for CityLab in Pittsburgh, focused on issues of racial equity, economic inequities, and environment/climate justice. Here’s what’s Read More…

Brutal Drug Treatments Continue Create Drugged Out Society: By the early 1950s, psyciatrists had discovered the next “miracle cure” – one that swelled psychiatric coffers and altered the face, but never the intent, of institutional psychiatry. Developed originally as a synthetic dye, French psychiatrist Jean Delay discovered Thorazine, which had profound effect on patients. Marketed Read More…