Davonne Reaves Hotel Entrepreneur Invites you to stay, and remember “Once you go Black, you never go back!” Black hotel owner and commercial real estate investor Davonne Reaves hopes the popular cheeky catchphrase rings true for those who stay at one of thousands of Black-owned hotels and bed & breakfasts across America this summer. 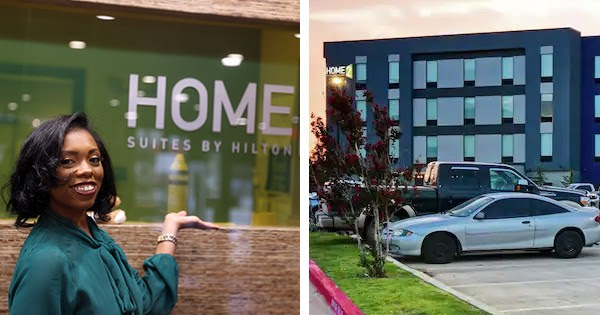 “In 2019, MMGYGlobal reported that African Americans spent over $109 billion on travel, but according to The National Association of Black Hotel Owners Operators and Developers, a trade organization, African-Americans own less than two percent of the nation’s hotels. Clearly, there’s a disconnect there and I’m trying to change that,” explains Atlanta-based Reaves who nabbed national headlines in January 2021 for her $8.3 million acquisition of a Home2 Suites by Hilton hotel in El Reno, Oklahoma, just outside Oklahoma City. She secured the all-suite property with business partner and former Georgia State University roommate, Jessica Myers and a diverse group of investors, mostly Millennials. The purchase earned her and Myers the unique distinction of becoming what is believed to be the youngest African American woman to ever co-own a major hotel chain property.

Owning a hotel once seemed like a far-fetched dream for Reaves, as an African-American woman who grew up in a working-class family in the South and she hopes her campaign will help to raise more awareness about the Black-owned hotel properties that exist, while also drawing attention to the need for more and more vendor opportunities and diverse representation in the upper ranks of the hospitality industry overall. “That’s totally attainable: plus, there are some amazing and wonderful Black-owned hotel properties among us: like the Downtown Clifton in Tucson, Arizona, the Oak Bluffs Inn at Martha’s Vineyard, the Ivy Hotel in Baltimore and the five-star Salamander Resort & Spa just outside of Washington D.C., to name a few,” notes Reaves, now 34, a mom to a precocious toddler. “I want more people to know about these beautiful spaces, and more importantly, the need for more targeted support. These property owners need that to survive and to thrive in the hospitality industry.”

To support the campaign travelers are asked to peruse the newly-launched StayBlackExperience.com website, which features a comprehensive and up-to-date list of Black-owned hotels and B&Bs along with information about the owners and their properties, and book travel at the locations listed. Reaves hopes the #StayBlackExperience will inspire more people, especially members of the Black community, to commit to supporting Black-owned lodging venues through summer 2021 and hopefully well beyond.

“This is about giving back, but it’s also about tracking the economic impact that Black consumers are making, but aren’t necessarily getting acknowledged for,” says Reaves, an award-winning nearly 15-year hospitality industry veteran who got her start as a front desk clerk at the Hyatt Regency Atlanta. She eventually progressed to bigger roles, including a career-changing role as an associate for CHMWarnick, the largest third-party hotel asset management company in the country. Last year, she also made history as the first African-American woman to receive a prestigious hospitality consulting award from the International Society of Hospitality Consultants, an exclusive invite-only trade industry organization.

“I want to track the money we spend,” adds Reaves. “I want to be able to say that this campaign was able to generate over $2 million and here’s the data because that can really drive change. Nobody really pays attention to you, unless there’s a dollar sign in front of it.”

Reaves said she conceived and launched the campaign to help address the dearth of diverse representation that persists in the industry and hopefully to help lessen the blow for hospitality industry leaders, management, and workers, all hit hard by declining revenue brought on by the COVID-19 pandemic. “In all my years, I’ve never seen it this bad before; when you’re seeing hotel closures and general managers getting laid off, people who started in the industry before I was even born, you know it’s bad,” she says. “I’m a problem-solver, so I had to figure out some way to help.”

The campaign, she says, is also an extension of a lofty goal she set at the start of 2021; to create 221 new Black hotel owners and investors by the end of the year. “I believe with hard work and a lot of targeted effort, it’s totally attainable,” says Reaves, who also helms The Vonne Group (www.TheVonneGroup.com), an Atlanta-based commercial real estate consulting firm. “Like Sam Cooke sang, I believe change will come in this industry, but it starts with us, as a community, making support a top priority.”

Reaves is available for interviews about the #StayBlackExperience and her passionate advocacy work focused on education and economic empowerment in the hospitality industry. For more information, please visit

Where do you go after 31 years in prison?

Where do you go after 31 years in prison? He went to Walmart and brought his subscribers amon Reid is 51. He spent 31 years of his life in prison. There’s a lot he hasn’t experienced. “For instance, I had never been to Walmart or on a motorcycle or on a boat. Never been to Read More…

Viola Fletcher was 7 yrs old when white armed mobs descended on Tulsa, Oklahoma, Killing Black People and destroyings Seven-year-old Viola Fletcher was awakened by her parents 100 years ago today and told they had to leave home. Angry, gun-toting white mobs had set out under the cover of nightfall in her hometown of Tulsa, Read More…

World’s Healthiest Foods 100 foods that can serve as the basis of your Healthiest Way of Eating Links to the articles about these foods can be found below. In addition to questions about our foods, we often get asked about beverages and sweeteners. In the beverage category, water and green tea have been especially popular Read More…