Lenders are pressuring the Agriculture Department to give them more money, saying quick repayments will cut into profits 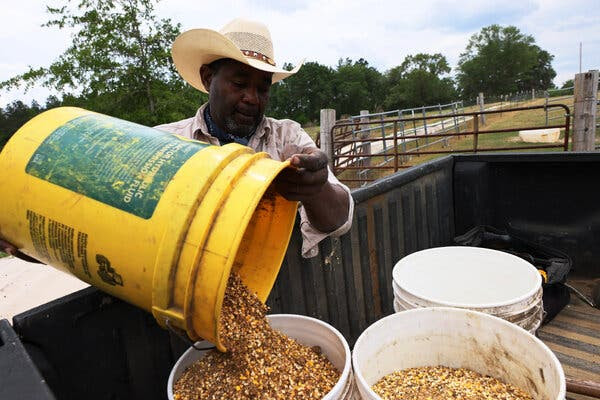 Handy Kennedy, a farmer in Cobbtown, Ga., and founder of a cooperative of Black farmers. Debt relief approved by Congress in March aims to make amends for decades of financial discrimination against Black and other nonwhite farmers.Credit…Michael M. Santiago/Getty Images

WASHINGTON — The Biden administration’s efforts to provide $4 billion in debt relief to minority farmers is encountering stiff resistance from banks, which are complaining that the government initiative to pay off the loans of borrowers who have faced decades of financial discrimination will cut into their profits and hurt investors.

The debt relief was approved as part of the $1.9 trillion stimulus package that Congress passed in March and was intended to make amends for the discrimination that Black and other nonwhite farmers have faced from lenders and the United States Department of Agriculture over the years. But no money has yet gone out the door.

Instead, the program has become mired in controversy and lawsuits. In April, white farmers who claim that they are victims of reverse discrimination sued the U.S.D.A. over the initiative.

Now, three of the biggest banking groups — the American Bankers Association, the Independent Community Bankers of America and National Rural Lenders Association — are waging their own fight and complaining about the cost of being repaid early.

Their argument stems from the way banks make money from loans and how they decide where to extend credit. When a bank lends money to a borrower, like a farmer, it considers several factors, including how much interest it will earn over the lifetime of the loan and whether the bank can sell the loan to other investors.

By allowing borrowers to repay their debts early, the lenders are being denied income they have long expected, they argue. The banks want the federal government to pay money beyond the outstanding loan amount so that banks and investors will not miss out on interest income that they were expecting or money that they would have made reselling the loans to other investors

They also want other investors who bought the loans in the secondary market to get government money that would make up for whatever losses they might incur from the early payoff.

Bank lobbyists, in letters and virtual meetings, have been asking the Agriculture Department to make changes to the repayment program, a U.S.D.A. official said. They are pressing the U.S.D.A. to simply make the loan payments, rather than wipe out the debt all at once. And they are warning of other repercussions, including long-term damage to the U.S.D.A.’s minority lending program.

In a letter sent last month to Tom Vilsack, the agriculture secretary, the banks suggested that they might be more reluctant to extend credit if the loans were quickly repaid, leaving minority farmers worse off in the long run. The intimation was viewed as a threat by some organizations that represent Black farmers.

“If U.S.D.A. does not compensate lenders for such disruptions or avoid sudden loan payoffs, the likely result will be less access to credit for those seeking U.S.D.A. guaranteed loans in the future, including U.S.D.A. farmers/ranchers,” they wrote to Mr. Vilsack in April.

The U.S.D.A. has shown no inclination to reverse course. An agency official said that obliging the banks would put an undue burden on taxpayers and that the law did not allow the agency to pay interest costs or reimburse secondary market investors. The agency hopes to be able to begin the debt relief process in the coming weeks, according to the official, who requested anonymity because they were not authorized to comment on the program.

The relief legislation that Congress passed in March provided “sums as may be necessary” from the Treasury Department to help minority farmers and ranchers pay off loans granted or guaranteed by the Agriculture Department. Most of the loans are made directly to farmers, but about 12 percent, or 3,078, are made through lenders and guaranteed by the U.S.D.A.

The Congressional Budget Office estimated that the loan forgiveness provision would cost $4 billion over a decade.

While America’s banks have flourished in the last century, the number of Black-owned farms has declined sharply since 1920, to less than 40,000 today from about a million. Their demise is the result of industry consolidation as well as onerous loan terms and high foreclosure rates.

Black farmers have been frustrated by the delays and say they are angry that banks are demanding additional money, slowing down the debt relief process.

“Look at the two groups: You have the Black men and women who have gone through racism and discrimination and have lost their land and their livelihood,” said Bill Bridgeforth, a farmer in Alabama who is on the board of the National Black Growers Council. “And then you have the American Bankers Association, which represents the wealthiest folks in the land, and they’re whining about the money they could potentially lose.”

John Boyd Jr., president of the National Black Farmers Association, a nonprofit, said he found it upsetting that the banks said little about years of discriminatory lending practices and instead complained about losing profits.

“They’ve never signed on to a letter or supported us to end discrimination, but they were quick to send a letter to the secretary telling him how troublesome it’s going to be for the banks,” Mr. Boyd said. “They need to think about the trouble they’ve caused not working with Black farmers and the foreclosure process and how troublesome that was for us.”

“It’s planting season and Black farmers and farmers of color really could use this relief,” Mr. Boyd said.

Cornelius Blanding, executive director of the Federation of Southern Cooperatives/Land Assistance Fund, said that the letter from the banks appeared to be a veiled threat.

“They are prioritizing profits over people,” Mr. Blanding said, expressing concern that the backlash from banks and white farmers could delay the debt relief. “Debt has been a burden on the back of many farmers and especially farmers of color. Them holding this up really prolongs justice.”

Although the government is paying 120 percent of the outstanding loan amounts to cover additional taxes and fees, banks say that unless they get more, they will be on the losing end of the bailout.

The banking industry groups could not offer an estimate of how much additional money they would need to be satisfied. The Agriculture Department said it would cost tens of millions of dollars to meet the banks’ demands.

In the letter to Mr. Vilsack, the bank lobbyists pointed to one large community bank, which they said had a $200 million portfolio of loans to socially disadvantaged farmers that would lose millions of dollars of net income per year if the loans were quickly paid off. They warned that such a move would “undoubtedly reduce the bank’s ability to retain employees.”

The American Bankers Association defended the request, arguing that lenders have been a lifeline to minority farmers. It said that the matter primarily affects the group’s smaller members that have large portfolios of loans from socially disadvantaged borrowers. Representatives for Goldman Sachs, JPMorgan Chase and Citigroup said that the debt relief program had not been on their radar and that they had not been lobbying against it.

“We recognize the need for U.S.D.A. to carry out this act of Congress, and we support the goal of providing financial relief to socially disadvantaged farmers and ranchers,” said Sarah Grano, a spokeswoman for the American Bankers Association. “We believe it would be helpful if the U.S.D.A. implemented this one-time action without causing undue financial harm to the very lenders who have been supporting farmers with much-needed credit.”

Danny Creel, the executive director of the National Rural Lenders Association, said he had no comment. An official from the Independent Community Bankers of America said that the group was not currently considering litigation and that it anticipated that the federal government would find a way to accommodate its requests.

Lawmakers who helped craft the relief legislation have expressed little sympathy for the banks and are pressing the agriculture department to get the money out the door.

Senator Cory Booker, a New Jersey Democrat, said: “U.S.D.A. should now take this first step toward addressing the agency’s history of discrimination by quickly implementing the law that Congress passed and moving forward without delay to pay off in full all direct and guaranteed loans of Black farmers and other socially disadvantaged farmers.

The banks are not the only ones who have been fighting the debt relief initiative. A group of white farmers in Wisconsin, Minnesota, South Dakota and Ohio are suing the Agriculture Department, arguing that offering debt relief on the basis of skin color is discriminatory. America First Legal, a group led by the former Trump administration official Stephen Miller, filed a lawsuit making a similar argument in U.S. District Court for the Northern District of Texas this month.

Mr. Vilsack said at a White House press briefing this month that his department would not be deterred by pushback against its plans to help minority farmers.

“I think I have to take you back 20, 30 years, when we know for a fact that socially disadvantaged producers were discriminated against by the United States Department of Agriculture,” Mr. Vilsack said. “So, the American Rescue Plan’s effort is to begin addressing the cumulative effect of that discrimination in terms of socially disadvantaged producers.”

Filmmaker Brandi Webb is the director of an experimental documentary that indicts the U.S. Government on 18 charges, for crimes committed against Black and Brown citizens. Her documentary, Betrayal of a Nation, is a two-part series that intertwines scripted courtroom dialog with out-of-court real-life interviews with experts and witnesses. These interviews highlight oppressive acts such Read More…

Mother’s Day:  Believe it or not, but many people don’t celebrate Mother’s Day. But why? What’s so wrong with a special day to show love to one’s mom? Well, the problem for many is the origin – where the idea of Mother’s Day came from, how it started, and why it even exists. The Origin Read More…

Are you feeling really “down” sometimes and really “up” other times? Are these mood changes causing problems at work, school, or home? I yes, you may have bipolar disorder, also called manic-depressive illness. Things to remember: 1. Look for signs of bipolar disorder. 2. Understand that bipolar disorder is a real illness. 3. See your Read More…