Apollo 11 returned to Earth, carrying the three astronauts and its precious cargo of moon rocks. It is now part of the permanent collection of the National Air and Space Museum in Washington (although it is currently on an extended 50th anniversary tour of other museums throughout the United States.) 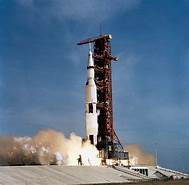 Most of the rest of the huge 363-foot Saturn V Apollo rocket was destroyed during the course of the mission. The first and second stages fell away after their fuel was expended, and crashed into the Atlantic ocean. The third (S-IVB) stage carried the astronauts on into orbit, and was later fired again to accelerate the astronauts from their 17,000 mph orbital speed to some 25,000 mph to send them on to the moon (TLI, or trans-lunar injection.) Afterward it was jettisoned, and entered a heliocentric (solar) orbit.

The lunar module Eagle, of course, landed on the moon. After the historic mission of Neil Armstrong and Buzz Aldrin, its upper half (the ascent stage) lifted off, leaving the descent stage at the Sea of Tranquility, where it remains to this day. Upon docking with the orbiting command module, Armstrong and Aldrin joined Michael Collins in the Columbia, and the Eagle was jettisoned. The ascent stage later impacted on the moon, although of the six successful landings, Eagle is the only lunar module whose final impact site is unknown.

Attached to the command module was the service module, which carried equipment, instruments, oxygen, fuel cells, and (importantly) the engine needed to leave lunar orbit and return to Earth. The service module was jettisoned shortly before reentry, and burned up in the atmosphere. Columbia splashed down in the Pacific, where it was recovered by the aircraft carrier USS Hornet.

The Apollo 7 and Apollo 9 missions didn’t go to the moon, but remained in orbit around the Earth. Apollo 7 was the shake-down flight for the Block II Command Module (developed after the Apollo 1 fire), and its third stage was allowed to reenter the atmosphere, where it burned up. Apollo 9 was an Earth-orbit flight test of the Lunar Module; after the LM had been extracted from its fairing at the top of the third stage, the rocket was fired again, sending it into a solar orbit. Although Apollo 8 and Apollo 10 were not landing missions, they did use their third stages to accelerate out of Earth orbit and on to the moon. After speeding their spacecraft on their way, those third stages also ended up in orbit around the sun, just as Apollo 11’s did a few months later.

The intention had been for the Apollo 12 third stage to be shot into a similar heliocentric orbit, and it was thought that this had been accomplished. But in 2002 an amateur astronomer discovered an asteroid which, strangely, appeared to be in an extended orbit around the Earth; this “asteroid” was eventually determined to be the long-lost third stage from Apollo 12.

The remaining missions, however, did not simply discard their S-IVB stages. Instead, the expended third stages from Apollos 13–17 were deliberately crashed into the moon, where their impacts could be recorded by the seismometers that the earlier missions had left on the lunar surface. These five impacts provided important data about the interior structure of the moon. They also created five new lunar craters, each about 130 feet in diameter.

By Lucius Gantt      Recently, rapper, actor, producer and businessman Ice Cube, or O’Shea Jackson, said he would talk to “anybody” who had a solid plan to create African American wealth and generate economic development, or something like that.      Well, I’m somebody and I know how to address his wealth building concerns!      I’ve Read More…

The Gantt Report:  Message To Black Women Ladies, this column is for you. I have two daughters and what I’m writing about is nothing that my daughters haven’t heard from me before. Sisters, you never know who you’ll fall in love with. Most women want a “good” man but what is a good man? Well, Read More…

Homeopathy Homeopathy is a natural approach to medicine that works without contraindications or side effects to stimulate the body’s curative response so the body heals itself. More Detail… Your body has the ability to heal itself. When you are ill, your body produces symptoms, which is how we know that the body has recognized that Read More…