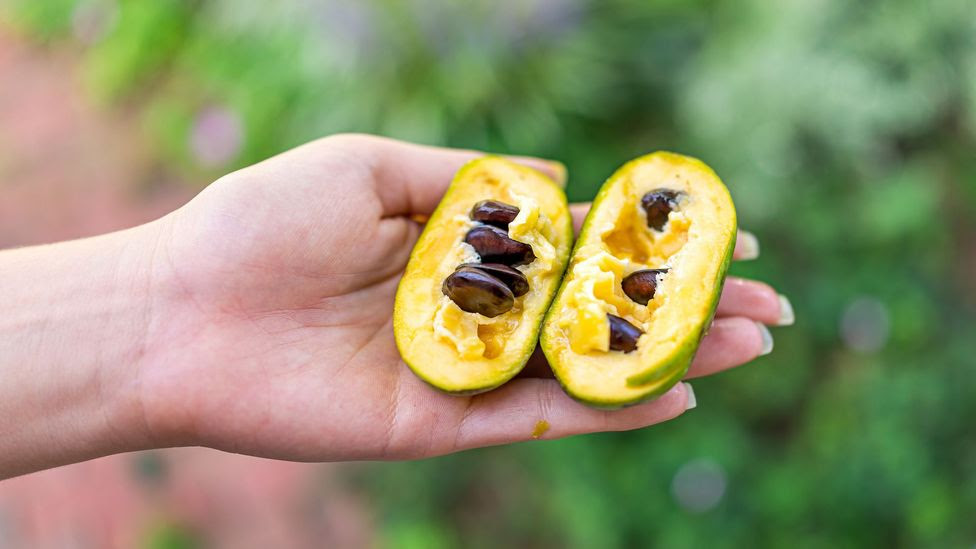 By Jonathan Shipley26th April 2022
Across large swaths of North America, an ancient fruit is growing wild but largely forgotten. However, a community of foodies, farmers and scientists is eagerly trying to change that.

Suzie knows more about pawpaws than most, it seems. North America’s largest native edible fruit grows wild in 26 US states, including Texas, Ohio, West Virginia, New York and Michigan and all the way up to Ontario, Canada. Yet most people have never heard of it.

That’s because pawpaws have never been sold on a large scale. Commercial farmers have long shunned them because they need a special growing environment of low, wet areas and because they spoil only a few days after harvest – so you won’t see the yellow-green fruit next to the grapes at the grocery store. Nevertheless, a community of avid pawpaw fans across the US – from festival organisers and chefs to scientists and independent farmers – is expanding the love for this forgotten fruit, and they want you to love it too.

“They are so delicious,” said Michael Judd, author of For the Love of Paw Paws: A Mini Manual for Growing and Caring for Paw Paws – From Seed to Table. During the harvest season (typically a few weeks in late summer or early autumn), his diet consists mainly of pawpaws taken right off the branch. “It’s a nutrient-rich superfood,” he added, listing off the pawpaw’s many attributes: antioxidants, all the amino acids, magnesium, copper, zinc, iron, potassium, phosphorus, vitamin C.

To help get the word out, Judd will be hosting his seventh annual pawpaw festival this September, on his farm in Frederick, Maryland, which includes tastings, jam making, pawpaw ice cream, music, lectures and more. 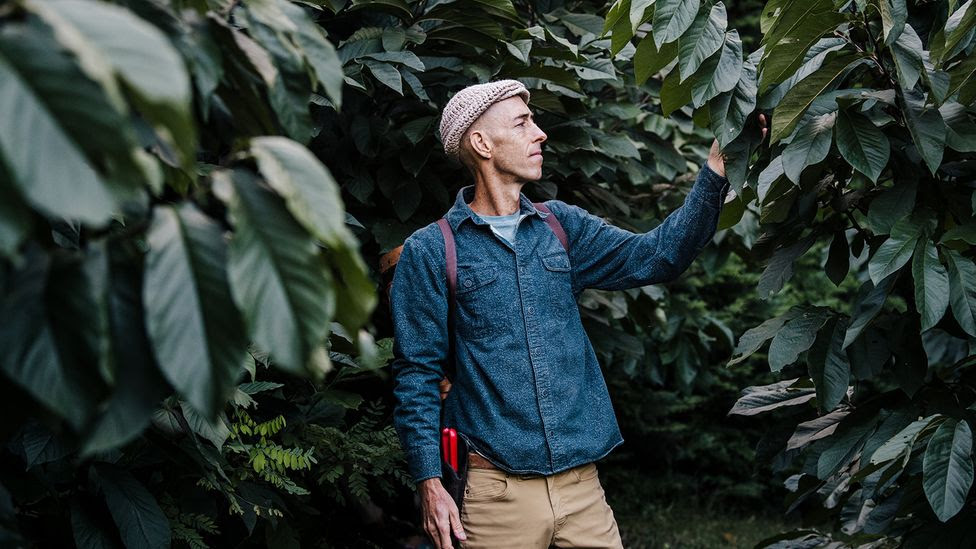 Michael Judd is the author of For the Love of Paw Paws: A Mini Manual for Growing and Caring for Paw Paws – From Seed to Table. (Credit: Christine Ashburn/Michael Judd)

An even larger festival in Ohio has been drawing fans since 1999. “Last year we had close to 10,000 visitors,” said Chris Chmiel, co-owner of Integration Acres in Albany, Ohio, where he grows pawpaws, ships pawpaw products and helps organise the village’s annual festival. “People attend every year, and it has become a family tradition to many. We also host a pawpaw cook-off, best pawpaw competition and a pawpaw eating competition. The pawpaw beer has been a huge success for the festival!”

Chmiel stumbled on the pawpaw as a college student, and it influenced the course of his studies and his career in sustainable agriculture. He even has a tattoo of the fruit on his arm. “It’s a tropical fruit growing right here in Appalachia… it’s sort of the king of the native plants around here,” he said in a 2018 TEDx Talk.

The pawpaw is in the same family as the custard apple, cherimoya, sweetsop, soursop and ylang-ylang. It’s a subtropical fruit that migrated north from Central America, and it is atypical; the only member of the family not confined to the tropics.

The earliest fossil evidence of pawpaws originated in the Miocene Epoch, about 23 to 5.3 million years ago in what is now Colorado. Over time, the climate has had warming periods, expanding the range of tropical areas north and, by extension, the pawpaw. Additionally, scientists have hypothesised that pawpaws were dispersed northward by megafauna, like mastodons, mammoths and sloths, sabre-toothed cats and giant beavers.

There is evidence that humans played a role in pawpaw dispersal as well. “Natives in the eastern half of the country have always used pawpaws,” said Dr Devon Mihesuah, a citizen of the Choctaw Nation who holds the Cora Lee Beers Price professorship in International Cultural Understanding at the University of Kansas. “Iroquois reportedly mashed pawpaws and made the flesh into cakes and then dried them in the sun. They were used as a travel food or mixed with water into cornbread.”

In 1541, Spanish explorer Hernando de Soto took note of Native Americans cultivating it east of the Mississippi River. George Washington wrote in his diary in 1785: “Planted all my cedars, all my pawpaw, and two honey locust trees.” (Though there’s no historical documentation, it is said chilled pawpaw was Washington’s favourite dessert.) In 1786, when Thomas Jefferson was minister to France, he had pawpaw seeds and plants shipped from Virginia to friends in Europe. A journal entry from the explorers Lewis and Clark dated 18 September 1806 recorded that the men were “entirely out of provisions” but “appear perfectly contented”, living “very well on the pappaws.”

The fruit’s texture has been compared to custard, and the flavour is “a blend of banana and mango, with undertones of vanilla, caramel, pineapple, coconut and melon, depending on the cultivar”, said Sheri Crabtree, a horticulture and research extension associate at Kentucky State University’s pawpaw research programme. 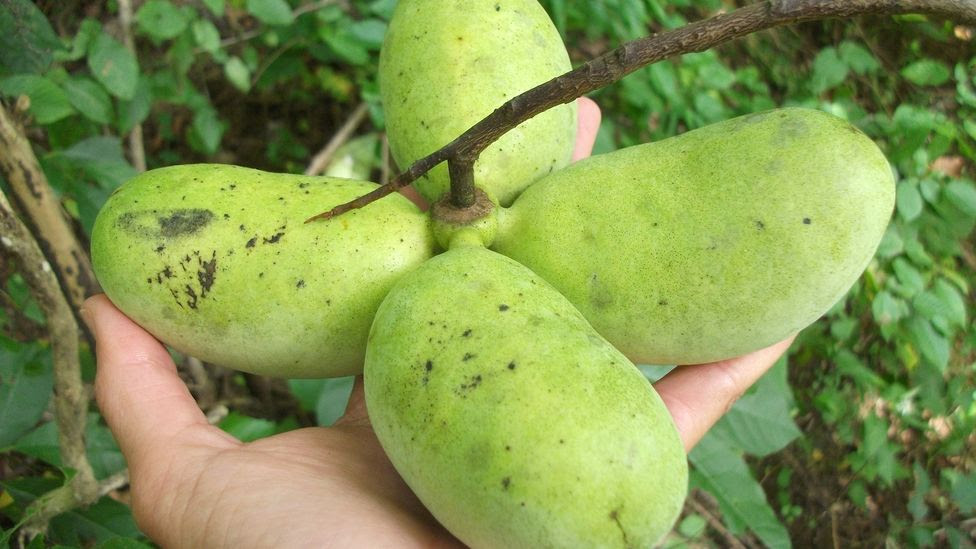 The pawpaw is in the same family as the custard apple, cherimoya, sweetsop, soursop and ylang-ylang. (Credit: db_beyer/Getty Images)

Many an aficionado will tell you that the mango-shaped orbs – yellow-green on the outside with gold-orange flesh, and 7 to 13cm long with a weight of up to half a kilogram – are best enjoyed hand-picked off the tree. But for now, it’s nearly impossible to find them at a local grocery store; instead, farmers sell the fresh fruit or its frozen pulp online direct to consumers or at local farmer’s markets. Pawpaw trees are also sold by nurseries.

Scientists are at work, though, learning more about the pawpaw and finding ways to make it more economically viable. Iowa State University is developing a pawpaw variety with a longer shelf life and a larger fruit with fewer seeds.

Kentucky State University has a pawpaw programme too. “We’re interested in pawpaw from an ecological standpoint as a native plant that is losing habitat, and from a horticultural standpoint as a unique high-value fruit crop that can be grown sustainably since it’s well suited for the climate,” said Crabtree. She noted that over the past 20 years she’s seen awareness of the fruit grow, driven by the shift toward sustainable and local food production and the Slow Food movement. Some of that attention is also driven by efforts to honour indigenous foods. As Mihesuah pointed out, “Tribes are attempting to protect and revitalise their traditional food sources, and pawpaws are an important part.”

Chefs and brewers in the food and beverage world are also raising awareness. Taylor Knapp is the chef behind PAWPAW, a pop-up restaurant dedicated to showcasing ingredients farmed, fished and foraged on the North Fork of Long Island in New York. His frequently changing menu has included dishes like local duck breast with pawpaw sauce, a pawpaw sundae with black walnut caramel and burnt orange meringue, and pawpaw and white chocolate bon bons. Clearly Knapp, like many others, is a devotee.

“Pawpaws are an incredible native fruit that rivals the most sought-after exotic specimens we ship in from around the world,” he said. 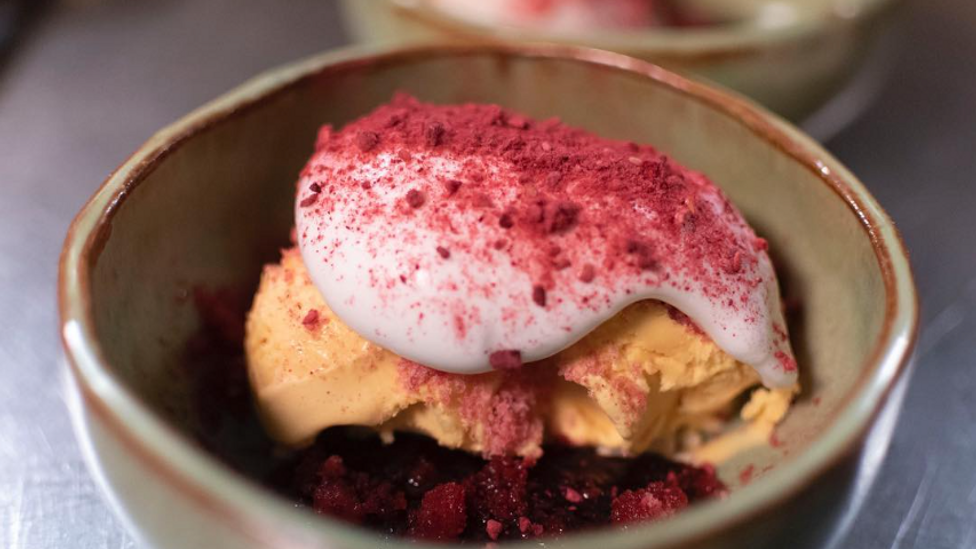 Indeed, it seems that pawpaws are becoming more and more fashionable. Tim Luscher of Sig Luscher Brewery in Frankfort, Kentucky, crafts pawpaw beer. Alicia Burton of Jeptha Creed Distillery in Shelbyville, Kentucky, makes pawpaw brandy. Chef and culinary educator Sara Bir recently wrote The Pocket Pawpaw Cookbook. “At their best, pawpaws are custardy. Therefore, I love them in baked custards and chilled, dairy-based desserts,” she said. “They also do well in tropically inspired savoury foods – a pawpaw beurre blanc spiked with habanero pepper to serve with shrimp, say.” And Minnesota-based chef Alan Bergo, a noted forager and hunter of obscure wild foods, has taken a shine to the fruit, sharing recipes for pawpaw panna cotta and pawpaw cheesecake on his website.

It’s an enthusiastic collection of hard-working individuals eager to put the pawpaw on a bigger stage. George Washington would be pleased.

By GRACE The Wholistic Belief & Mind Powers: Concept of Health throughout history, humans have struggled within mental prison of their own making. The legacy of judgment, misunderstanding, and distortion befalls incoming humans immediately, crippling them through the well-intended but unenlightened actions of parents. At present the human experience is but a pale comparison to Read More…

In Gainesville, over 1,000 community members came together to march through the city last summer. Many of them were students at the University of Florida, carrying on Gainesville’s significant legacy of student activism, dating back to the Civil Rights Movement of the 1950s and ‘60s. Since the Civil Rights Movement, groups of UF students and Read More…

By Heather Bushman Buttons, bumper stickers, shirts and signs — all adorned with calls to “save it, don’t pave it” and “stop the turnpike” — were the accessories of choice for several Inverness residents on Tuesday evening. About 70 of these decorated locals gathered at the bi-monthly Inverness City Council meeting, where they voiced concerns regarding Read More…