A group of cave divers is celebrating a milestone in their efforts to map out an unknown world beneath our feet. 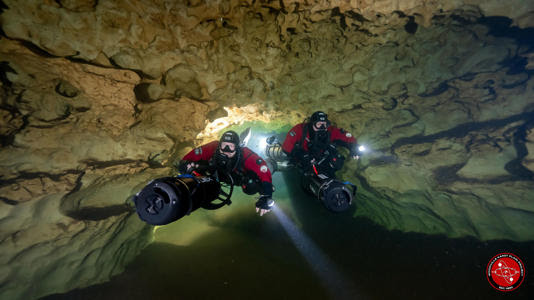 The non-profit research group had spent more than a decade looking for the tunnel.

Blake Wilson and Steve Cox are the primary explorers for WKPP. They were the ones to make the milestone discovery.

“Ten years, there was a lot of ups and downs and definitely a lot of challenges we faced, so that’s what made the actual connection that much more significant for us,” Wilson said.

“Where these systems go and how they connect- it is something we’ve been pursuing for a long time now,” he said. “And the curiosity draws us around every corner we find.”

Cave diving is incredibly intricate and requires a hefty amount of patience. Descending to these depths often requires hours for decompression as they slowly rise to the surface.

But for Cox and Wilson, there’s nothing like it.

“It’s a sense of stillness, peacefulness,” Cox said. “You control your destiny more or less. You’re just either floating with the current or swimming along, and it’s quiet. ”

“At first, I didn’t believe it, and it took me a few minutes to actually have it sink in on the dive that we had made the connection. And from there, it was joy,” Cox said.

“This is an amazing part of living in Florida, living on limestone, living in Wakulla county,” McKinlay said. “There are cave systems everywhere and we feel that it’s important to let the public know so they can take efforts to protect and make sure these systems are providing good, fresh water for generations to come.”

McKinlay said WKPP doesn’t wade into local politics over natural resources. Instead, they provide data to help others make decisions.

WKPP dye tests and other data took center stage in 2022, as local clean water activists protested plans to build a gas station at the intersection of State Highway 267 and U.S 319. That location sits close to the Chip’s Hole Cave System, which now has a confirmed link to Wakulla Springs.

The group’s next goal: find the connection between the caves and the Gulf of Mexico. It might take several more years, but these divers are ready for the challenge.

Wrongful Deaths Conviction Compensation Law must change Imagine you’re 18 years old and convicted of a murder you didn’t commit. The jury found you guilty on shaky evidence and recommended life imprisonment, but the judge decided the crime was heinous and deserved the death penalty. Your appeals went nowhere, so you sat in prison for Read More…

Water Drought in South Oregon and the Federal Relief Program, has contributed to the on-going ground water Crisis in the West. Kimberley Hasselbrink For two decades, the Bureau of Reclamation incentivized farmers to pump water faster than the resource could recover, despite warnings from its own scientists. This year, residents of Klamath County paid the Read More…

No Knock Warrant, Wrongfully issued to my Father caused him to Missed my Graduation:  On May 28, 2020, my father missed my graduation from Harvard. During the virtual ceremony, after scrolling through endless squares and deducing it wasn’t a technology failure, I was unable to find him. In this country, we have normalized Black men’s Read More…