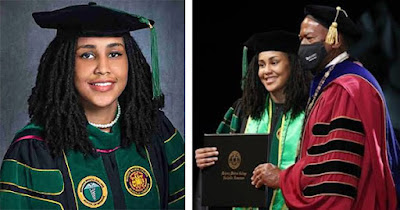 Zindzi Thompson, a 21-year-old Black woman from South Carolina, has made history as the youngest person to graduate from Meharry Medical College in Nashville, Tennessee. She is also the youngest Black female graduate of medicine in the United States.

Since she was as little as 3-years old, Zindzi has always dreamed of becoming a doctor. Coming from a family of doctors, her curiosity about the career just kept building up as she was growing up.

“I have always wanted to be a doctor for as long as I can remember, there’s nothing else that I wanted to be.  Zindzi started pursuing her dream career at a very young age. She was just 13-years-old when she enrolled at the Mary Baldwin University in Virginia.

It was not easy for her parents, Samuel and Machelle Thompson, to send her away to college at such an early age. But they trusted her and continued supporting her in her educational goals.

“A big part of the process has been letting her go and achieve her goal. And that’s been the hardest part. The academics for her and knowing that she was going to do it was easy, but not having your daughter through those years was the hard part,” Samuel Thompson said.

After graduating college at the age of 16, Zindzi immediately enrolled at Meharry Medical College, an HBCU in Nashville, Tennessee, where at least a dozen of her family members have previously graduated.

Most recently, Zindzi walked across the stage as the youngest Black woman to graduate from the institution and the youngest Black female graduate of medicine in the whole country at the age of 21. She admitted that there are times she struggled in studying but giving up was never an option.

“Just don’t give up. Just push through. If you have to re-take a course, re-take it and do better — you can definitely do it, it’s not impossible,” she advised.

Books N Bros, Book Club, Created by SIDNEY KEYS III, a sophomore at Pace Academy in Atlanta, is finding success in a book club he created for Black boys. The teen’s club, Books N Bros, allows Black children to come together and read stories which represent their own reality. Sidney started his club when he was 11 years Read More…

Tanzania — Tanzania’s vice president, 61-year old Samia Suluhu Hassan, was recently sworn in as the country’s president following the sudden death of John Magufuli, making her the first female president in the history of the East African country. “It’s not a good day for me to talk to you because I have a wound Read More…

Big Pharma giant Johnson & Johnson admitted bribing European doctors and agreed to pay $70 million in civil and criminal court, according to a recent article in The New York Times. The bribes were so egregious that one copy of an internal company 3-mail stated that providing cash incentives to surgeons is common knowledge in Read More…