Urban Prep Academies senior Amari Austin, who was accepted at 73 different schools, walks onstage as to the applause of the faculty during the school’s Signing Day celebration at Daley Plaza on Thursday in the Loop, Thursday afternoon, May 19, 2022,

Amari Austin’s house brings to mind that Harry Potter scene in which a blizzard of letters arrives at the boy’s home, each with an invitation to attend Hogwarts School of Witchcraft and Wizardry.

Envelopes keep coming for Austin — so many that his mother, Altrice Peterson, has had to buy a special file cabinet to hold them all.

“It was overwhelming,” said Peterson Thursday. Neither Peterson nor her son is complaining. And on Thursday, Austin’s classmates at Urban Prep Academy rose to their feet and offered him thunderous applause in Daley Plaza to celebrate his receiving acceptance letters to 73 four-year colleges across the United States. 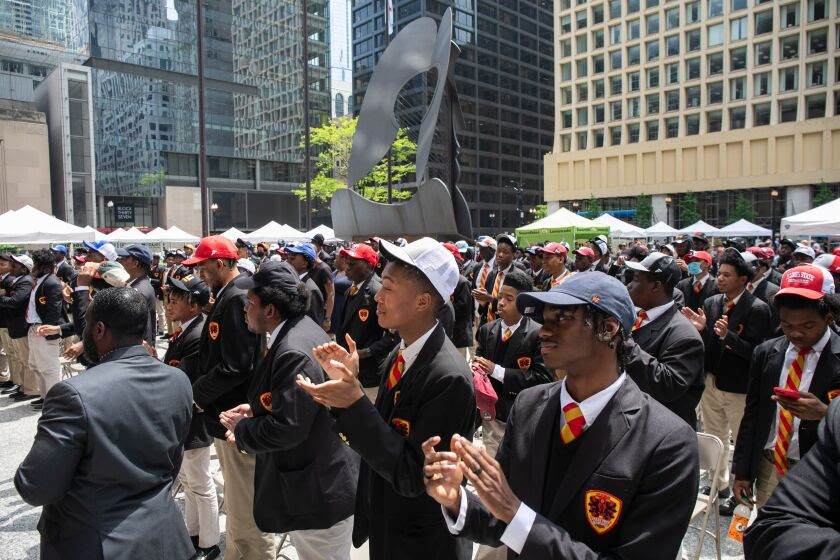 “There were some colleges I didn’t get into, but that kept me motivated,” said Austin, who plans to attend Southern Illinois University and major in computer science.

Austin received by far the most acceptance offers of any of his peers graduating from Urban Prep this year, but as usual, with a school system that has boasted a 100% acceptance of seniors to four-year colleges for each of the last 13 years, Thursday’s event — “Urban Prep 100% College Acceptance Celebration and Signing Day” — was more about the whole than the individual.

The vast majority of Urban Prep students are African-American and low income. 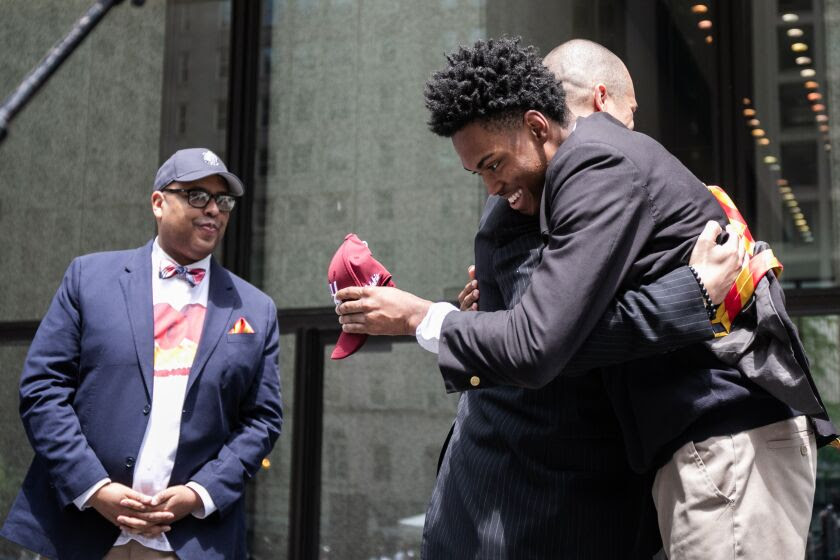 “Every day is a particularly difficult day for them in the city of Chicago. It is a tough environment for our students to grow up in. So it is a success for these guys to even show up to school. Add on to that a pandemic that we’ve had to endure and deal with, and you realize that this type of achievement — 100% college acceptance for the seniors — means even more,” said Tim King, founder and CEO of Urban Prep Academies, which has campuses downtown, in Englewood and in Bronzeville.

Peterson attributed her son’s success to perseverance — both his, and hers. 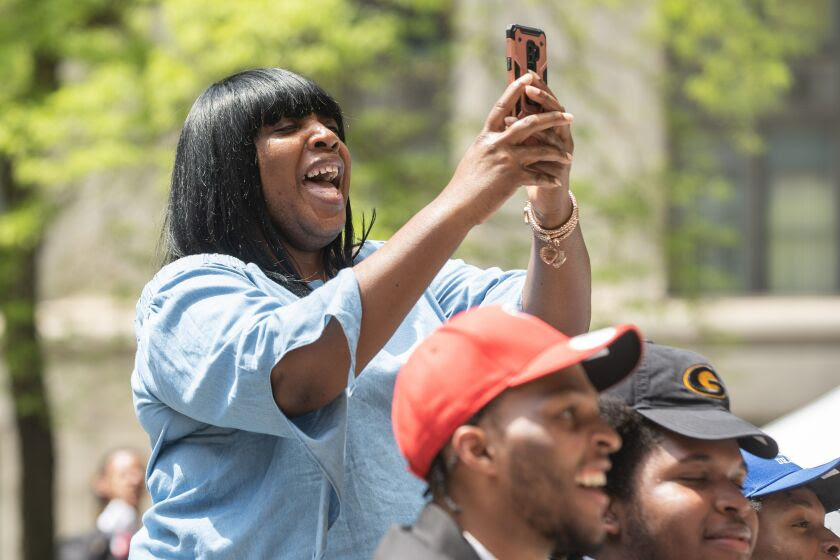 Altrice Peterson, mother of Urban Prep Academies senior Amari Austin, who was accepted at 73 different schools, records a video of her son during Urban Prep Academies’ College Signing Day at Daley Plaza Thursday.  “I stayed on his neck about his studies. I told him he has to study,” Peterson said. “He didn’t like math when he first came to Urban Prep and then he started getting As.”

When her son’s name was called Thursday, Peterson leaped to her feet, brandishing her cell phone camera.  “That’s my son!” she yelled. 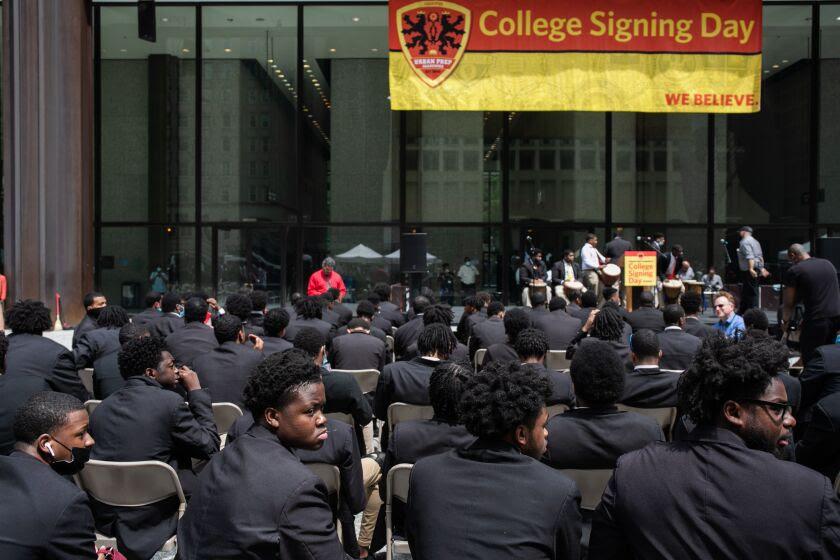 Dozens of other faces reflected Peterson’s unrestrained joy, including those of Shalawn Jackson and Leroy Walker Jr., whose son Leroy Walker III is heading to Tennessee State University.  “I am so proud,” said the young man’s mother.

She was also a little sad Thursday, as it began to sink in that she and her husband are about to become empty nesters.

“I want him to get away, but I want him to understand that Chicago is always home, he can always come back here. It’s a big world. Explore,” Jackson said. 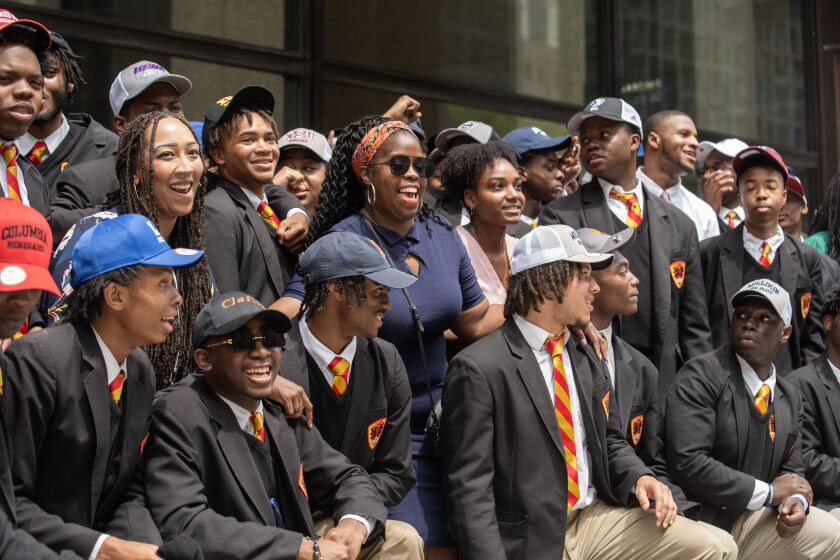 Urban Prep Academies graduating seniors and faculty pose for a video after the school’s College Signing Day celebration at Daley Plaza on Thursday.

10 year 10-year-old Black girl ‘handcuffed with excessive force and arrested from school’ over an offensive drawing of a bully Davenport Journal  17 hours ago The 10-year-old girl may see her name be expunged from police records, but the memory of being arrested in front of her classmates and teachers may never be erased from Read More…

Walter Francis White The Undercover Brother And The NAACP

Walter Francis White helped the NAACP document the truth about lynchings in America. The fact that he could pass as caucasian came in very handy. On a hot September day in 1919, Walter Francis White found himself running for his life. In the two days since he had been in Elaine, Arkansas, White had seen Read More…

Zindzi Thompson, a 21-year-old Black woman from South Carolina, has made history as the youngest person to graduate from Meharry Medical College in Nashville, Tennessee. She is also the youngest Black female graduate of medicine in the United States. Since she was as little as 3-years old, Zindzi has always dreamed of becoming a doctor. Read More…