Black adults in the U.S. South more likely than those in other regions to attend a Black congregation.

Worship habits among Black Christians in the South, where African American churches date back to the 1770s, have long differed from practices of Black Americans in other parts of the United States. Contrasting styles of worship were a source of tension after the Civil War and during mass migrations of Southern Black people to Northern cities, when Black Northerners objected to expressive forms of worship that were common in the South, such as dancing in church. 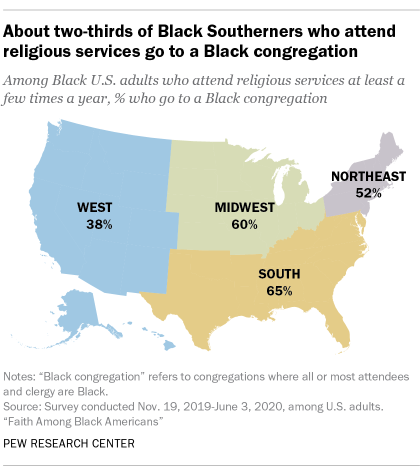 How we did this

The religious experience of Black Southerners stands out in other ways, too. Protestantism, which is the most common faith among Black Americans in all four regions of the country, is most prevalent among Black Americans in the South (72%). That compares with 65% of Black adults in the Midwest, 58% in the West and 54% in the Northeast. Black Southerners in the East South Central subregion are even more likely than Black adults in other parts of the South to say they are Protestant (78% vs. 70%).

In contrast, the Northeast has relatively high shares of Black Catholics and adherents of non-Christian religions compared with the South; 11% of Black Northeasterners are Catholic, compared with 5% of Black Southerners. 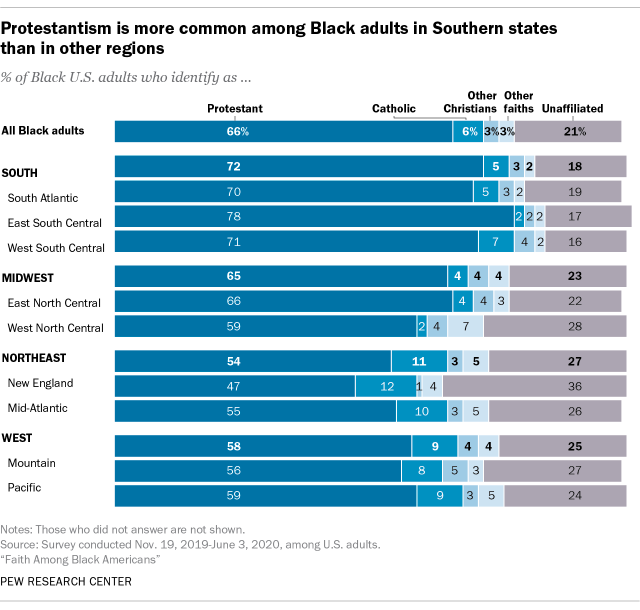 A similar pattern can be seen when looking at religious service attendance and frequency of prayer: More than a third of Black Southerners (37%) say they attend worship services at least once a week, compared with roughly three-in-ten Black adults in the Midwest (31%) and about a quarter in the West (26%) and Northeast (25%). And about seven-in-ten Black Southerners (69%) say they pray daily, compared with six-in-ten in the Midwest and just over half in the Northeast (54%) and West (51%).

Among Black Southerners specifically, those who live in the East South Central division of the South as well as the area made up of Arkansas, Louisiana, Oklahoma and Texas (West South Central) are more likely than Black Southerners in states along the Atlantic coast and in West Virginia (South Atlantic) to say they pray daily. They are also more likely to say that religion is “very important” to them. 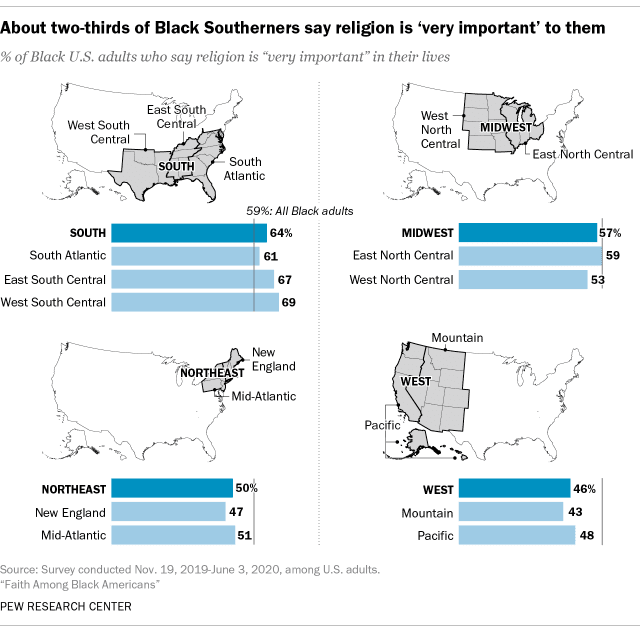 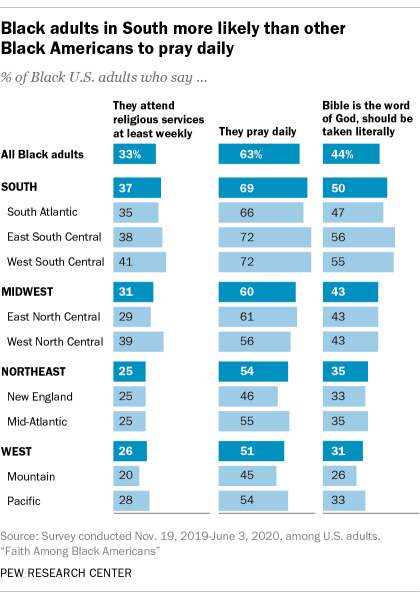 Wilberforce University is Lifted From Accreditation Probation. The Higher Learning Commission (HLC), the agency that accredits degree granting colleges and universities, has removed the sanction of Probation for Wilberforce University. The Commission took this action based on the university’s ability to demonstrate that it now meets HLC’s Criteria for Accreditation. The university was placed on Read More…

Accomplishment: 7 Brothers and Sisters Who Are World-Renowned, Classical Music Geniuses

The Kanneh-Mason siblings are all talented classical musicians on the rise. All in all, they are 7 seven brothers and sisters ranging in age from 10-years old to 23-years old – all of whom play either the violin, the piano, or the cello to a very high standard.

The Gantt Report By Lucius Gantt I hope all of The Gantt Report fathers enjoyed a pleasant and peaceful Father’s Day. There are some devilish dads in the world but TGR dads know how important fathers are. Dad’s are, or should be, their daughter’s first love and their son’s true role model My dad, also Read More…