Questions are asked, and Sometimes the answers aren’t based on facts, well here is the Answers to Questions with facts based on experience.
I saw my coworker jogging after they had called in sick. Should I tell my boss?

I had this happen to me. I called in sick, went to the doctor and got a prescription. While waiting on the pharmacy to fill the prescription, I walked out into the Mall to wait for the prescription to be ready.

Some girls from work saw me and reported it to the boss. Of course, I had my prescription receipt with the date and time and a note from the doctor. My boss called these girls in at my request and told them what a mistake they’d made by “assuming” and what that made them by doing so. You know the old saying….

I once saw a guy in Wal-Mart when he was supposed to be at work. I didn’t say a word. He saw me when I saw him. He goes back and rants and raves to his supervisor. He got a lecture from the Big Boss when he went in and said he knew I didn’t like him and that he was sure I told him what had happened. I hadn’t…. Even not liking the guy, I assumed his lead had asked him to go or he was taking an approved break. Not my problem and I didn’t stick my nose into it. So, he essentially told on himself.

It’s just better not to start these games with co-workers. Besides, sometimes we need a mental day… Unless it affects you or is a habit, why spoil life for someone else. This could have been a day where something terrible happened, a break up or even something else bad. Leave it be and wish them well. You haven’t walked in their shoes… don’t assume.

One day, I was in an open safari vehicle, sitting very close to watch a fully grown leopard, the guide suddenly opened the door and got out of the vehicle. The leopard’s attitude immediately changed. Hearing the guide’s rustling footsteps in the grass, the leopard went from being completely relaxed and ignoring us, to suddenly getting angry. Very scary.

Suddenly the leopard jumped up and made one swift jump … to disappear into the bushes.

He didn’t attack us and instead ran

Open safari vehicles have no protection against predators who intend to attack vehicle occupants. If a lion or leopard wanted to jump into the vehicle to start having a good meal, it could easily do so.

But that didn’t happen.

Why are there thousands of open-air vehicles passing through safari every day in different parts of Africa, and we hardly ever hear of predators attacking people in safari vehicles? 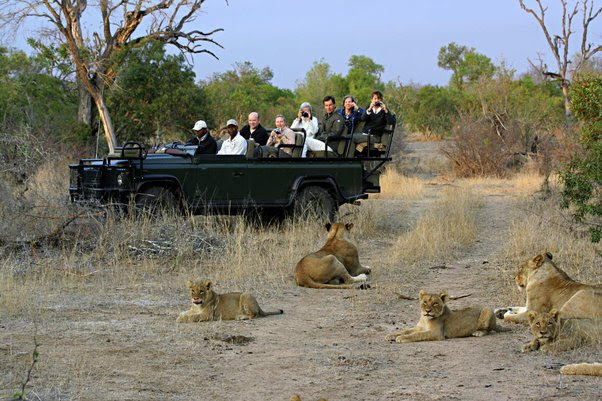 The answer is a combination of two things.

And the second reason why predators don’t attack humans in vehicles is because wild animals are afraid of humans by nature. Humans are at the top of the food chain, and wild animals know that. In most cases, a predator will flee from even a single human who approaches it on foot. And if there are humans in a crowd, their natural fear of humans is multiplied.

But when humans stay in the vehicle, they are less afraid because they don’t recognize it as a vehicle full of people. Sometimes predators approach open safari vehicles without fear or desire to attack. In many national parks, predators are used to vehicles and will not mind having a safari vehicle very close to them.

Of course, there are some exceptions.

There are special cases where predators attack humans in vehicles. In most of these cases, wild animals were raised by humans, or indeed grew up in captivity. They may not be wild predators by nature, but they have lost their natural fear of humans, or been overfed by humans. In such cases, predators have learned to associate humans with food.

And in one or two cases that I know of, animals are not fed or raised by humans but are very old, sick, or seriously injured. Old and injured animals can become very dangerous and act unexpectedly.

In one such case several years ago, an elderly male leopard, unable to escape from a viewing vehicle that was constantly harassing him and intruding on his privacy, the old leopard attacked a guide whose arm was hanging out of the window, and bit his arm. . But such occurrences are very, very rare.

I’ve been in the safari industry for many years and we’ve done thousands of open-air safaris, and seen thousands of incredible predators, many of them we’ve seen up close. Not once did a predator try to attack any of our vehicles or the people in them.

Statistically, you’re much, much safer in an open-air safari vehicle inside a national park surrounded by wild animals than when you’re on a big city highway where you could die in a car crash.

Veterans With PTSD:  Black IT Consultant Leaves His Job, Creates Powerful Mental Technology That Helps Veterans With PTSD. Nationwide — Gerard Nguedi is a highly educated African American man from Cameroon who was diagnosed with PTSD in 2016 after being repeatedly assaulted by the police for no reason. His father was a military man all of Read More…

Georgia counties elect the first Black sheriffs in their history

Three counties in Atlanta are going to have the first Black sheriffs in their respective history after the three men, who are all Democrats, were elected to fill the seats during Tuesday’s election. According to Channel 2 Action News, Craig Owens, a police major, defeated long-time Cobb County Republican Sheriff Neil Warren whilst electorates in Read More…