Maya  Angelou Coin has finally be release.  After a decades-long fight – and, to be clear, amidst enduring, egregious inequities – the U.S. Mint has begun circulating a new quarter featuring the late poet, author and activist Maya Angelou, now the first Black woman to appear on the coin. The Angelou tribute is the first in an American Women Quarters Program aimed at honoring prominent women, preferably of color, long ignored in a history and currency dominated by old, white, often slave-owning men. Known for her lyrical writing and majestic voice, Angelou rose to fame after the publication of her seminal autobiography, “I Know Why the Caged Bird Sings,” a harrowing account set in the segregated South of her brutal rape at the age of seven by her mother’s boyfriend – a trauma that rendered her mute for six years. “There is no greater agony,” she wrote much later, “than bearing an untold story inside you.” Over time, Angelou won countless literary and humanitarian awards, including the Presidential Medal of Freedom, and was given over 50 honorary degrees. She died in 2014 at 86, having never ceased speaking her vivid truth: “You may write me down in history/With your bitter, twisted lies/You may trod me in the very dirt/But still, like dust, I’ll rise.” 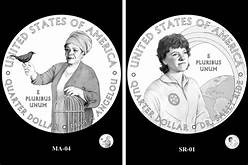 The Women Quarters project is largely credited to California Rep. Barbara Lee, who after years of advocacy introduced the Circulating Collectible Coin Redesign Act of 2020; it passed last January. With Monday’s release, she celebrated “the phenomenal women who shaped American history (who) have gone unrecognized for too long – especially women of color.” There will be more, thanks to the Mint’s invitation to the public to submit other entries: From now through 2025, the series will also feature Wilma Mankiller, the first female Cherokee chief; Adelina Otero-Warren, a New Mexico suffragette; Sally Ride, the first woman in space; and Anna May Wong, the first Chinese-American  film star. “Each time we redesign our currency, (it says) something about our country – what we value and how we’ve progressed,” said US Treasury Secretary Janet Yellen. Umm, yes and no, said Twitter. Many noted the new coin, echoing the Caged Bird, still has likely-slave-owner  George Washington on the “heads” side; others asked where Harriet Tubman’s long-awaited $20 bill is, or noted the country’s still-raging misogyny, or suggested half a new coin is like a male boss giving a 40-cent raise and congratulating himself on your “empowerment.” We take heart from Angelou. “When people show you who they are the first time, believe them,” she famously wrote. Then, “When you don’t like a thing…change it.”

Health & Human Services Won’t Block Safe Consumption Sites Health and Human Services (HHS) Secretary Xavier Becerra spoke with NPR about the opioid epidemic currently in the states and what potential solutions there are. Previous administrations have steered away from controversial solutions, such as safe consumption sites. However, with the opioid overdose and related deaths Read More…