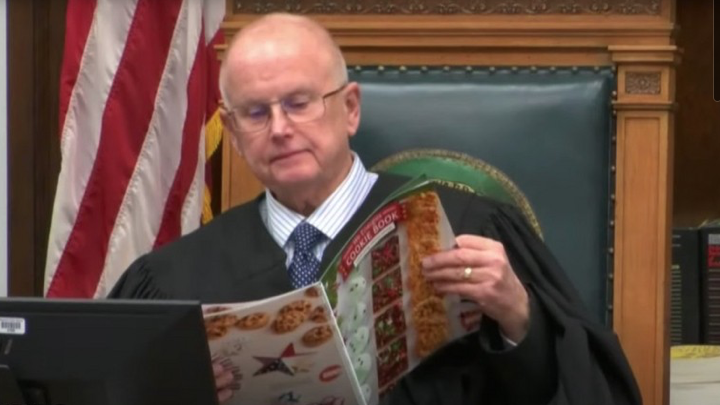 SAY WHAT? – This week we saw two dueling shitshows of egregious ineptitude, bias, WTF havoc and (likely) injustice in the high-profile trials of fake-crying idiot goon and hapless vigilante Kyle Rittenhouse, who randomly gunned down two protesters during BLM protests in Wisconsin with an AR-15 he got ’cause it “looked cool,” and three vicious, racist Georgia good ole boys who somewhat more pointedly chased and gunned down Ahmaud Arbery for jogging while black in their lily-white Jim Crow neighborhood.

The trial of the baby-faced “Vile Shittenhouse” has gotten far more press coverage, likely because he’s been shamefully embraced as a heroic victim by a thug-loving right-wing that raised millions for his bail, insisted he went to Kenosha to “clean up the filth left by the rioting Biden voters,” and argued he “should walk away a free and rich man after suing for malicious prosecution” – never mind the leering photos of him in bars with Proud Boys giving a White Power sign in a T-shirt that gloats, “Free As Fuck.”

Claiming self-defence for killing Anthony Huber and Joseph Rosenbaum and wounding Gaige Grosskreutz, little Kyle has proved a less-than-compelling witness: Blank and dumb as a rock, he’s been caught in lies, scrunched up his face in some dreadful, no-tears, Brett-Kavanaugh-style crying, and offered senseless narratives – ie: He went there to offer medical aid, yet walked away when his victim called for help. Twitter:  “My kid wanted to be a medic for Halloween but I couldn’t find him an AR-15 in time…I don’t always kill people in self-defense, but when I do I drive to a state I don’t live in with an AR-15 and wander the streets with said AR-15, because…self defense.” Trayvon should have been so lucky.

Kyle’s deficits have been matched by Judge Bruce Schroeder, 75, who has run such a blatantly partisan courtroom he seems to be working for the defence. Early on, he rejected multiple requests from prosecutors to allow proof of Kyle’s white-supremacism and refused to let them call his victims “victims” – “too loaded” – while letting the defence call them “rioters” and “looters,” though given they’re dead who knows. Notes Elie Mystal, “(Refusing) to use linguistically accurate terms for people who did not voluntarily attempt to catch a bullet with their face” while allowing defence to use prejudicial language about them “is the very definition of bias.” They were no angels, Schroeder implies, and neither are the prosecutors, which must be why he’s repeatedly harangued and attacked them in court. He also babbled endlessly about tech things he doesn’t get, let his cellphone ring in court to the Trumpian tune of “God Bless the U.S.A.,” joked about the Asian food for lunch, and blithely sat on the bench perusing a cookie catalogue during breaks. The “racist-AR-15-toting-white-boys-will-be-racist-AR-15-toting-white boys” vibe was sumptiously reflected in a loopy New York Times puff piece (WTF NYT?!) that began, “Kyle Rittenhouse, who has idolized law enforcement since he was young, arrived in Kenosha (with) one mission: to play the role of police officer and medic.’ Twitter: “Charles Manson, (who) idolized The Beatles, arrived in L.A. with dreams of recording success…John Wilkes Booth, who idolized theater since he was young, arrived at the Ford Theater with one mission: to catch a show from the balcony…Adolf Hitler, who has idolized artists, arrived in Berlin with one mission – to better his country…Jeffrey Dahmer, a shy polite loner, liked to go bar hopping, where he occasionally brought home people for dinner.” If Kyle gets off, many speculate, he’ll turn up on Dancing With the Stars and “Let’s Go Vigilantes!” t-shirts will bloom. “BREAKING:” reads a Daily Show headline. “Judge in Case Reveals He Has Adopted Kyle Rittenhouse, Declares Mistrial ‘Because He’s My Son.'”

In Georgia, the trial of white thugs Gregory McMichael, his son Travis McMichael, and their neighbor William “Roddie” Bryan has gotten much less attention, maybe because the random death of another black man – in this case, Ahmaud Arbery, 25, out jogging in February 2020 – isn’t news at this point, despite stomach-churning video that caught the three pudgy vigilantes chasing Arbery in two pickups, blocking his path, and shooting him like a dog with a shotgun in what’s been called “a lynching in the 21st century.” They’ve also claimed “self-defence,” pleading not guilty to nine charges of murder, aggravated assault and false imprisonment. Here, too, dubious moves abound. In a state where African-Americans make up a third of the population, the jury is blindingly white – 11 white jurors, one black – after defence attorneys struck all but one potential black juror in what Judge Timothy Walmsley admitted was “intentional discrimination,” though he did nothing to stop it; defence attorneys were so greedy for a skewed jury one even complained they hadn’t gotten enough “bubbas or Joe six-packs,” uneducated white hooligans looking for racist trouble. You know, like them. On Thursday, the jury heard from homeowner Larry English, whose unfinished house Arbery had been recorded wandering around, thus settlng up a narrative he was a thief. Nope, said English: He’d called 911 once before when video showed “a colored guy” who was “plundering around,” but in fact Arbery had taken nothing. The day he was shot, English said, he was probably just stopping to take a drink of water from a faucet, which as far as we know isn’t punishable by death yet, even in Georgia.

Still, that afternoon defence attorneys, evidently intent on proclaiming America’s justice system is still by and for white people so let’s not see too much uppityness around here, said the quiet part out loud and argued against the presence of a black pastor there to comfort Arbery’s family – in this case, the Rev. Al Sharpton – seeing as how bringing “these people” in to sit with the victim’s family would “intimidate” and “pressure” the jury, because, scary black men, and “there’s only so many pastors they can have.” “We don’t want any more Black pastors coming in here, or other Jesse Jacksons (who was nowhere in sight, though the Rev. William Barber had led a prayer vigil outside and “these people” do kinda all look alike) trying to influence a jury in this case,” said Kevin Gough, who represents Bryan, who last year on MLK Day sent a text that read, “I bet ya’ll are truly having a Monkey Parade over there.” Surprisingly declining to preface his remarks with, “I’m not a racist but,” Gough said he’s concerned about “bringing people in who really don’t have any ties to this case other than political interests” like the bond of humanity. In the bonkers twist of the day, he incomprehensibly added, “What if a bunch of people came in here dressed like Colonel Sanders with white masks…?” at which point he was mercifully interrupted by the judge, who said he was “not going to start blanketly excluding members of the public from this courtroom,” so forget it, dude. Because Gough doing such a crass racism was too weird to spark outrage, many observers were just baffled: Did they think the presence of servants of God undermined their effort to make Arbery “look like the perpetrator that he never was?…Does Gough have a problem with all Christians, or just the black ones?…Are they worried the Black pastors will pray too hard?” Apparently, they should be: There are reports that, when the trial resumes next week, 100 Black pastors will be in attendance. Meanwhile, watching American “justice” at work, Jesus, Lady Justice and MLK wept.

By Tana Hoy – –   5 Secrets People With Telekinesis Know Telekinesis is also known as “psychokinesis” and is the ability to move inanimate objects using the mind’s power. Some people read minds, some see the future, and there are those who can move objects with their mind. These individuals have the psychic ability Read More…