A Secretive US Navy Base on British land, Sad Story inside Diego Garcia, Is At The Center Of A Bitter Tug-of-War in the Indian Ocean 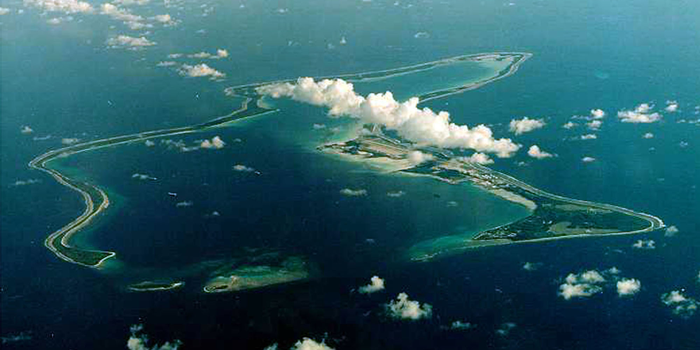 An undated file photo of Diego Garcia, the largest island in the Chagos Archipelago in the Indian Ocean and the site of a major US military base leased from Britain in 1966. Reuters

On the remote tropical island of Diego Garcia in the Indian Ocean lies a secretive, strategically vital US military base.

The base has served as a launchpad for US military operations in the Middle East and as a refueling point for Air Force patrols headed to the South China Sea, and it was even designated an emergency landing spot for space missions by NASA.

But this distant outpost of American power isn’t located on US territory. Instead it occupies what used to be part of the British Empire — and its formerly colonized inhabitants want it back.

A 2019 ruling from the UN’s highest court said Diego Garcia and the islands around it were illegally taken by Britain and should be returned to the islanders who were evicted. Though the ruling is not binding, it has put the future of the base in doubt.

In November 2022, officials from the UK and Mauritius, which claims sovereignty over the territory, began negotiations over the future of Diego Garcia in a bid to resolve “outstanding issues.”

Scroll down to see what the remote installation is like.

Diego Garcia is located in the Indian Ocean’s Chagos Archipelago, more than 1,000 miles from the nearest continent. 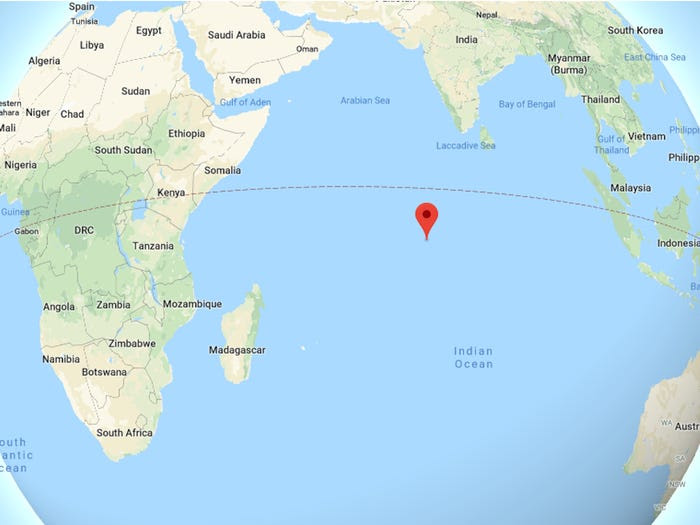 A map showing Diego Garcia’s location in the Indian Ocean. Google MapsIts position is strategically vital for the US, allowing it to project its military strength northwest into the Middle East and South Asia, east into Asia, or west into Africa.

It’s the most important US base in the Indian Ocean region.

It’s a horseshoe-shaped atoll of about 17 square miles. 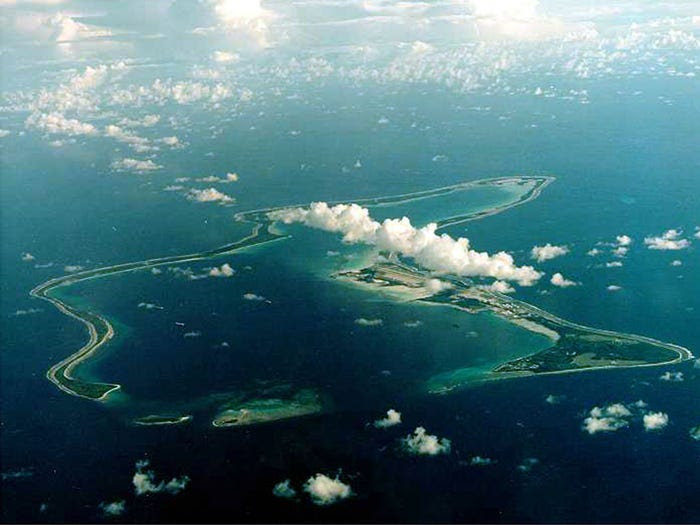 An undated file photo shows Diego Garcia, the largest island in the Chagos archipelago and site of a major United States military base in the middle of the Indian Ocean leased from Britain in 1966. ReutersDiego Garcia is surrounded by about 60 other atolls.

Its coast forms a deep natural harbor, making it the perfect site for a naval base.

Diego Garcia is a tropical island, with white sands and coconut forests, surrounded by azure seas. 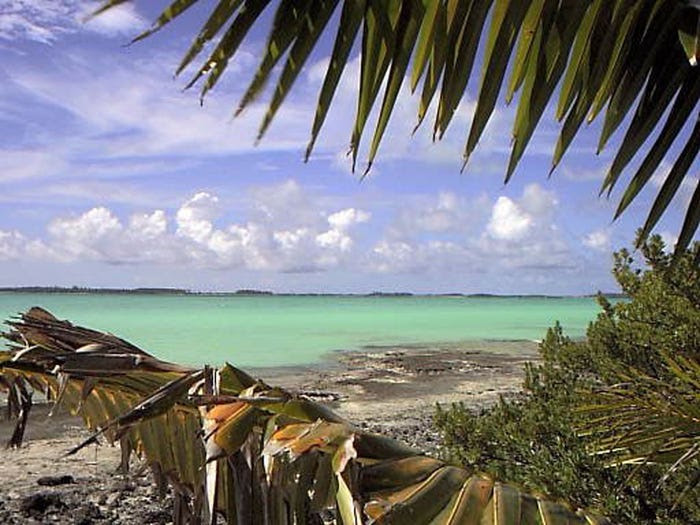 Turtle Cove on Diego Garcia. ReutersIt is home to turtles, giant migrating birds, and the coconut crab – the largest land-based animal on the island.

An estimated 3,000 to 5,000 service personnel are stationed at the base, mostly Americans with a few from the UK. 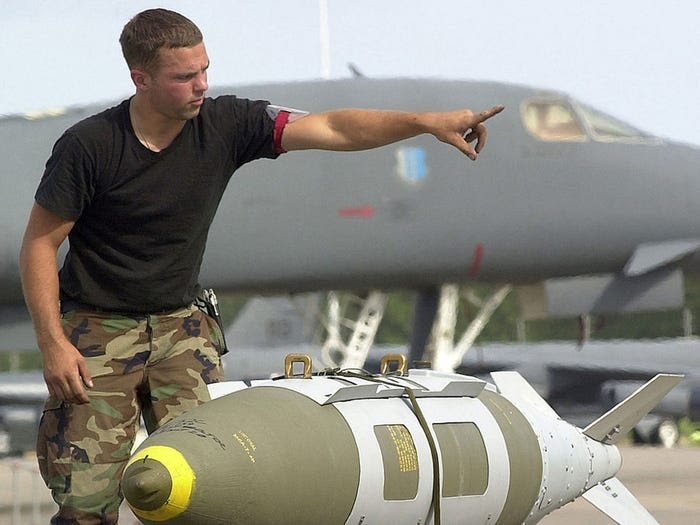 An Air Force weapons loader from the 28th Air Expeditionary Wing signaling that the 2,000-pound bomb he prepped was ready for loading on a B-1 bomber in 2001 at Diego Garcia Air Base. Shane Cuomo/US Air Force/Getty ImagesThere are also civilian contractors, mostly from nearby Mauritius, who cook and clean for the soldiers and sailors.

The “downtown” area of Diego Garcia is like a small American town. 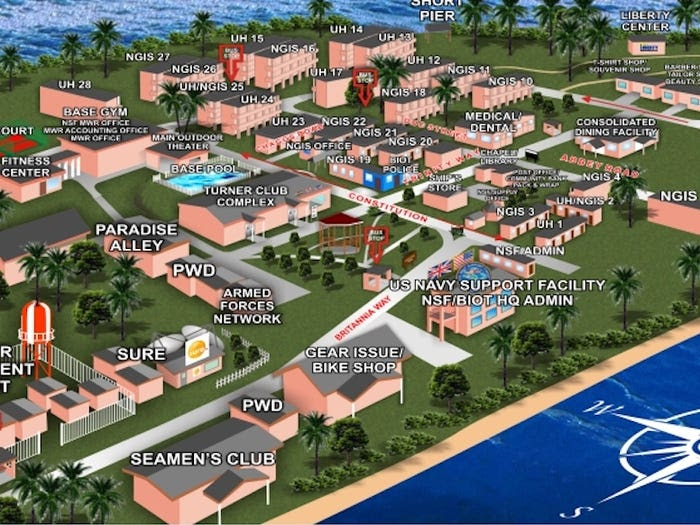 This image from the US Navy’s Morale, Welfare and Recreation department shows the layout of “downtown” Diego Garcia. MWR US NavyUS military service personnel can spend their downtime bowling, cycling, or shopping.

Diego Garcia has been the site of important military action by the US. 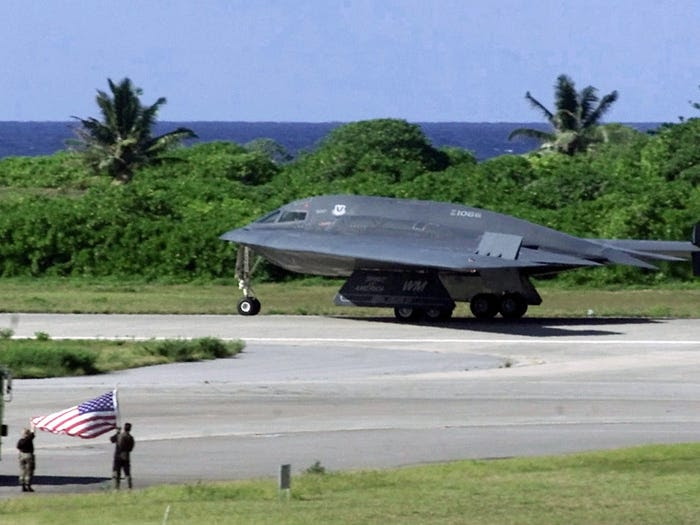 A US B-2 Spirit bomber, part of the 509th Bomb Wing at Whiteman Air Force Base in Missouri, at Diego Garcia on October 8, 2001, after an airstrike on Afghanistan. REUTERS/U.S. Department of Defense/Senior Airman Rebeca M. Luquin/Handout JDFrom Diego Garcia, US bombers launched attacks in Afghanistan in the wake of 9/11 and on Iraq during the 2003 invasion of the country by the US and its allies.

Before that, the site had proved its strategic importance for US military operations in the Middle East as a base for Air Force attacks in 1991 during the first Gulf War. 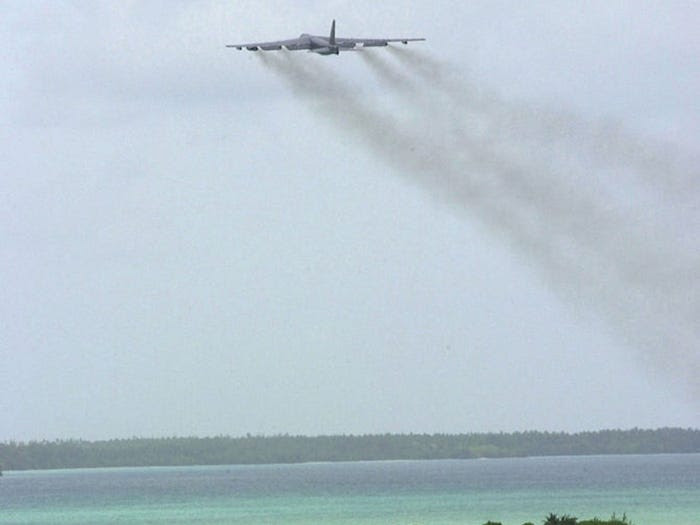 An Air Force B-52 bomber from the 28th Air Expeditionary Wing taking off for a combat mission on October 22, 2001. Shane Cuomo/US Air Force/Getty ImagesFrom the base, long-range B52 bombers embarked on missions to Afghanistan in 2001, targeting Taliban and Qaeda positions in the country’s mountains.

The base is also vital as a refueling point for the US Navy and Air Force. 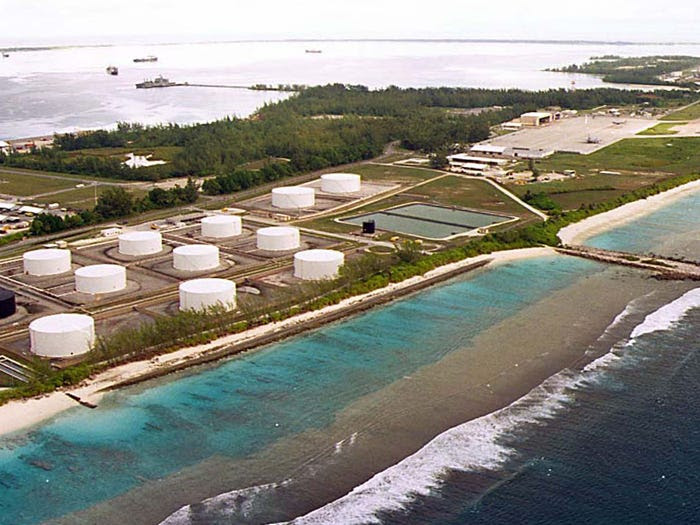 Fuel tanks at the edge of a military airstrip on Diego Garcia. ReutersIts deep port is able to accommodate aircraft carriers, nuclear submarines, and other ships.

“There are also massive pre-positioned ships in the lagoon, each about the size of the Empire State Building, filled with enough weapons and supplies for material tanks, helicopters for an entire brigade of Marines,” David Vine, who has written a book on the Chagos islands, told CNN.

With Diego Garcia accessible only to restricted US military personnel, its secrecy has attracted speculation. 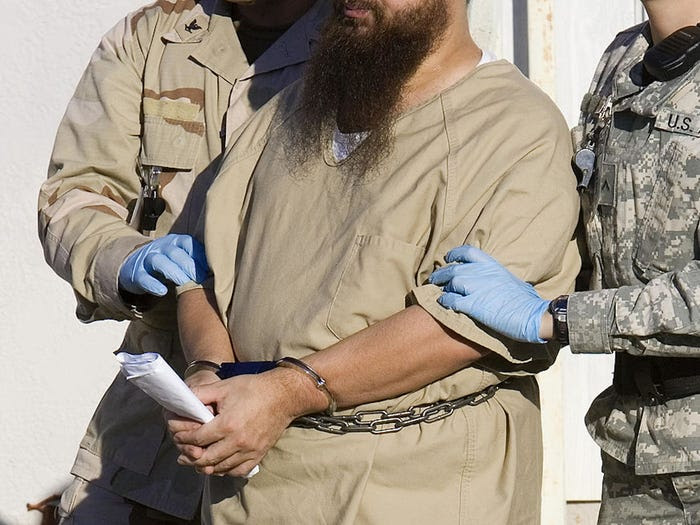 A detainee being escorted by military guards at Guantánamo Bay in Cuba in 2006. Photo credit should read PAUL J. RICHARDS/AFP/Getty ImagesUnlike the US military base in Guam, the spouses of personnel are not allowed on Diego Garcia. No journalist has visited.

Lawrence Wilkerson, a former official in the Bush administration, told Vice News in 2015 that CIA contacts had informed him it served as one of the network of prisons where people were detained, interrogated, and in some cases tortured as part of the post-9/11 war on terror.

The claims have been awkward for the British. Officials in the UK government have long denied UK complicity or involvement in the US’s “extraordinary rendition” program.

From 1967 to 1973, the British evicted the entire population of the Chagos islands — known as the Ilois — to make way for the US air base. 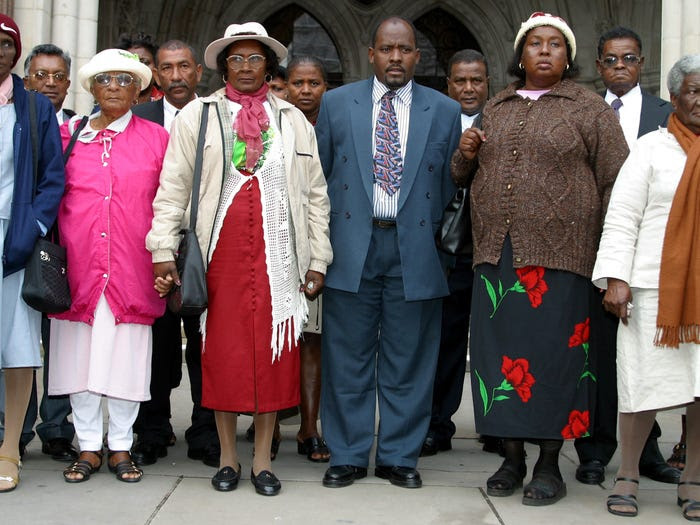 A group of refugees from the Indian Ocean island of Chagos outside the High Court in London on October 31, 2002. REUTERS/Michael Crabtree MC/AHThe ancestors of the Ilois had been transported to the islands as slaves to work coconut plantations in the 18th century.

But after being forcefully uprooted in the 1960s and 1970s, most of the Ilois were moved to nearby Mauritius or the Seychelles, where they faced poverty and discrimination.

Some moved then to Britain, where they have continued to experience hardship.

The Ilois have fought for the right to return to their homeland, with the British High Court in 2006 ruling that their expulsion was illegal.

The British government has continued to deny that it broke laws in expelling the Ilois, and it has blocked their right to return.

But the UN has said British rule over the islands is illegal. 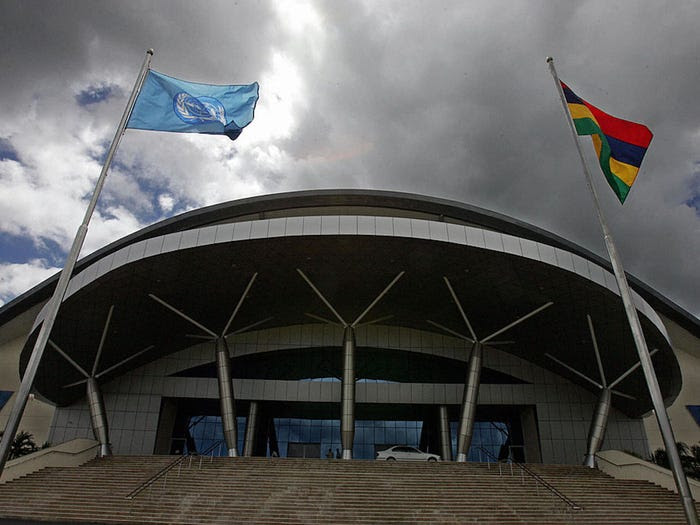 A conference center in Port Louis, Mauritius, flying the flags of the UN and Mauritius. MARCO LONGARI/AFP/Getty Images

In May 2o19, the UN’s highest court ruled that the 60 or so Chagos islands — including Diego Garcia — had been transferred to British authority illegally in 1965.

The islands were previously part of Mauritius, but Mauritius handed control of them to Britain for a cash fee two years before gaining independence.

The UN court ruled that it was illegal for the British in the 1960s to demand possession of the islands as a condition of independence.

Shortly Mauritius granted the land to the British, they leased it to the US.

The UN served an eviction notice to the British after its 2019 ruling. Though the ruling is not enforceable, it exerts moral pressure and has placed the future of the base in doubt.

Amid the uncertainty, the US has shown no indication that it’s willing to give up the base.

In a recent visit a visit to the island, Admiral Samuel Paparo, head of the US Pacific Fleet, stressed its importance to the US, Stars and Stripes reported.

“The visit underscored the strategic importance of Diego Garcia to an enduring free and open Indo-Pacific by enabling presence, assured access, and defense to the global commons,” a US Navy news release stated.

This article was first published in August 2019 and has been updated to include more detail and recent developments.

Con Artists reveals all Venture inside the mind of some of the greatest scammers. Nick Pachelli Read when you’ve got time to spare. In partnership with The summer of 2018 was affectionately nicknamed the Summer of Scam, as everyone on the internet devoured New York Magazine’s Anna Delvey long read—and every other scam-themed article that Read More…

Olympic Committee Bans Headgear Designed For Black Swimmers. Olympic swimmers will now be barred from using swimming caps made by Soul Cap, a Black-owned company that produces headgear specifically designed to help athletes compete without damaging their hair. The federation for international competitions in water sports made the decision this week, saying the caps don’t Read More…

A Transgender pro-family policy advocate who helped win support for the recently passed Alabama “bathroom bill,” which requires students to use bathrooms of their biological sex, is warning that school “trans” policies cause ripple effects of harm to girls even beyond sexual assault. In an exclusive interview with LifeSiteNews, Jameson Taylor, who serves as director of Read More…