When Felix McCullough was growing up as the youngest in a family of six children, there was no money for piano lessons. That didn’t stop him from learning to play. Decades of determination and dedication has paid off for the 51-year-old musician who takes command of a keyboard in an instant.

When McCullough was 13, feeling very much alone, his father bought a piano and Felix turned to music to fill his time. In the beginning, learning consisted of banging on the ivories, picking out notes that sounded right to his young ears. He not only learned to play by ear, he then developed the ability to play by heart—something not necessarily taught by conventional instructors. 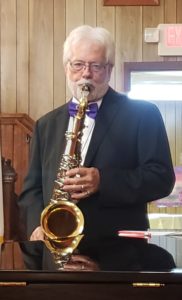 As he got older, listening to his heart became more important to him and how he felt when he would hear the music, resulting from his determination to sit at the piano for hours and allow what was inside him to flow outward through his hands. At age 14, he was developing his own style and played piano in church but said no one seemed to like it. In high school, he played for different meetings at various locations and was able to play for some well known performers along the way, all the time still learning more techniques and how to follow his instincts

“God and the Holy Spirit were my instructors,” said McCullough, who impresses crowds with his ability to listen to a song and then play it almost instantly. And, if the key isn’t right, changing it isn’t a problem.

His genuine smile and upbeat personality draws members of his audience and congregations to him and his joyful spirit.

He has about 1,000 original songs in his personal repertoire with new ones always being penned. He has recorded several CDs in the gospel genre.

“Gospel is my first love and primarily what I perform,” he said. “But I am expanding my personal and professional arenas to include other types of music.” 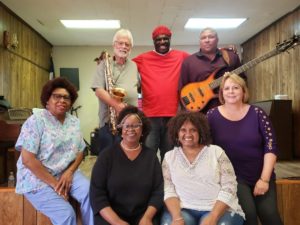 A spin-off from this group is “3 Play,” featuring McCullough, Clayton and Pete McDermott on drums. A female vocalist also sings solos and provides harmony. “I love Frank Sinatra and others from that era,” said McCullough. “In 3 Play, we perform 1940s show tunes. I expect both groups will do great things.”

Denise Rolley is a vocalist in Gospel Sensations. She has known McCullough through his appearances in various churches. She is a soloist in her own church choir and says she loves her participation in Felix & Company.

“The group has been together about eight months,” said Rolley. First we heard Felix perform in sister churches in McMinn County and around the area. We saw how talented he was. When I first heard him play, I wondered how far this could go. I agreed to be a part of his group. He is always willing to help others any way he can. The original group was three or four women then he added Tommy and Ron and Randy and two more singers. We are rapidly growing.”

In other interests, McCullough teaches private piano lessons and produces other local singers and musicians. He conducts a praise and worship service, open to the public every Sunday at 9 a.m. at Grace and Mercy Ministries, 714 Walter St., Athens. He plays keyboard for services at Voice of Delivery Ministries in Athens. He donates much of his time at area churches performing concerts, sometimes bringing his entire group.

In one year McCullough will attain a degree in theology through a Victory International college course.

McCullough looks forward to accomplishing many of his dreams and goals such as being married, pastoring a church someday, starting a campaign to clean up low-income neighborhoods, writing more songs and screenplays and continuing to entertain small and large crowds doing what he feels is his mission and calling in life; not fearing any obstacles or challenges. He wants to always use what God has placed in his heart.

For years I have wondered what the value of Twitter is for sales and business. Everyone knows the indisputable value of LinkedIn for B2B sales, marketing, B2B prospecting, and entrepreneurs in general. But Twitter is finally gaining traction in B2B.

The Gantt Report – Thoughts At Large

By Lucius Gantt Commission districts to limit the election of African Americans, like my friend, Fredd Atkins, who was expected to win a County Commission government seat before the satanic move that favored whites that seek to win elections in Sarasota. Wealthy Floridian Hugh Culverhouse Jr., an investor in hedge funds, oil

GOD ALMIGHTY GRAND UNIFIED THEOREM by Mahogany Revue Staffers In October 2006, which was 12 years ago, People Daily Online Newspaper published the excitement and celebration of Dr. Professor Gabriel Oyibo discovery of the ultima formula for everything called GAGUT.