Jessica Nabongo has visited 75 countries in her life, and she knows how to pack, plan, and most important, shop.

Jessica Nabongo was born and raised in Detroit after her parents immigrated from Uganda. Since then, she has lived everywhere, from Japan to rural Benin, charting her travels in her blog, Catch Me If You Can. 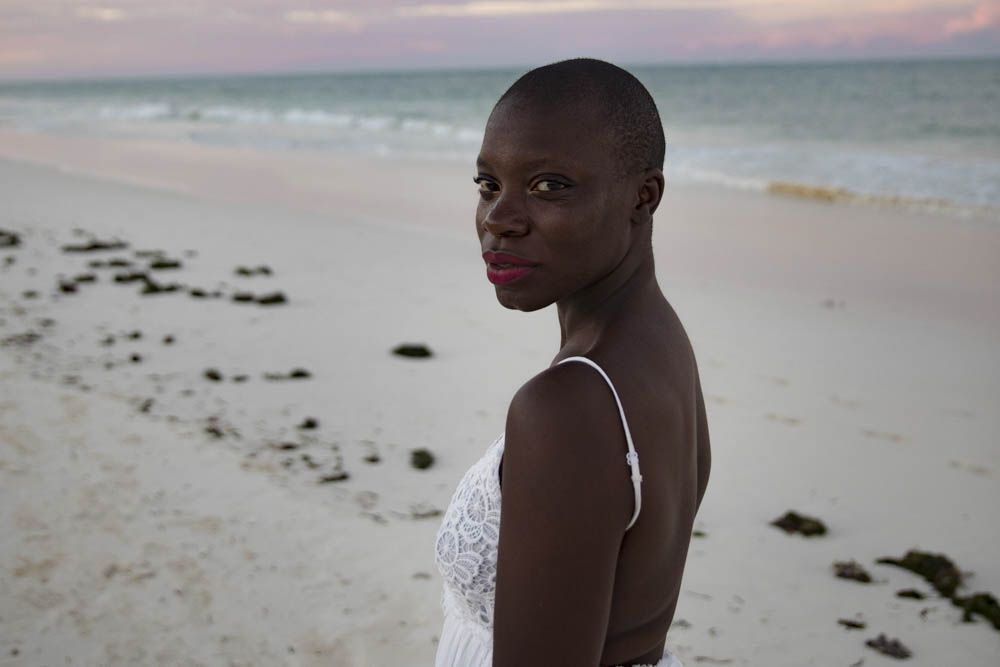 Nabongo turned her passion into a business when she started Jet Black, a boutique travel company that focuses on encouraging tourism to throughout the African diaspora—Africa, Central and South America, and the Caribbean. But she isn’t desk-bound, despite her clients’ demands; working remotely, as of June 2017, she’s logged 75 countries and counting of the world’s 195. 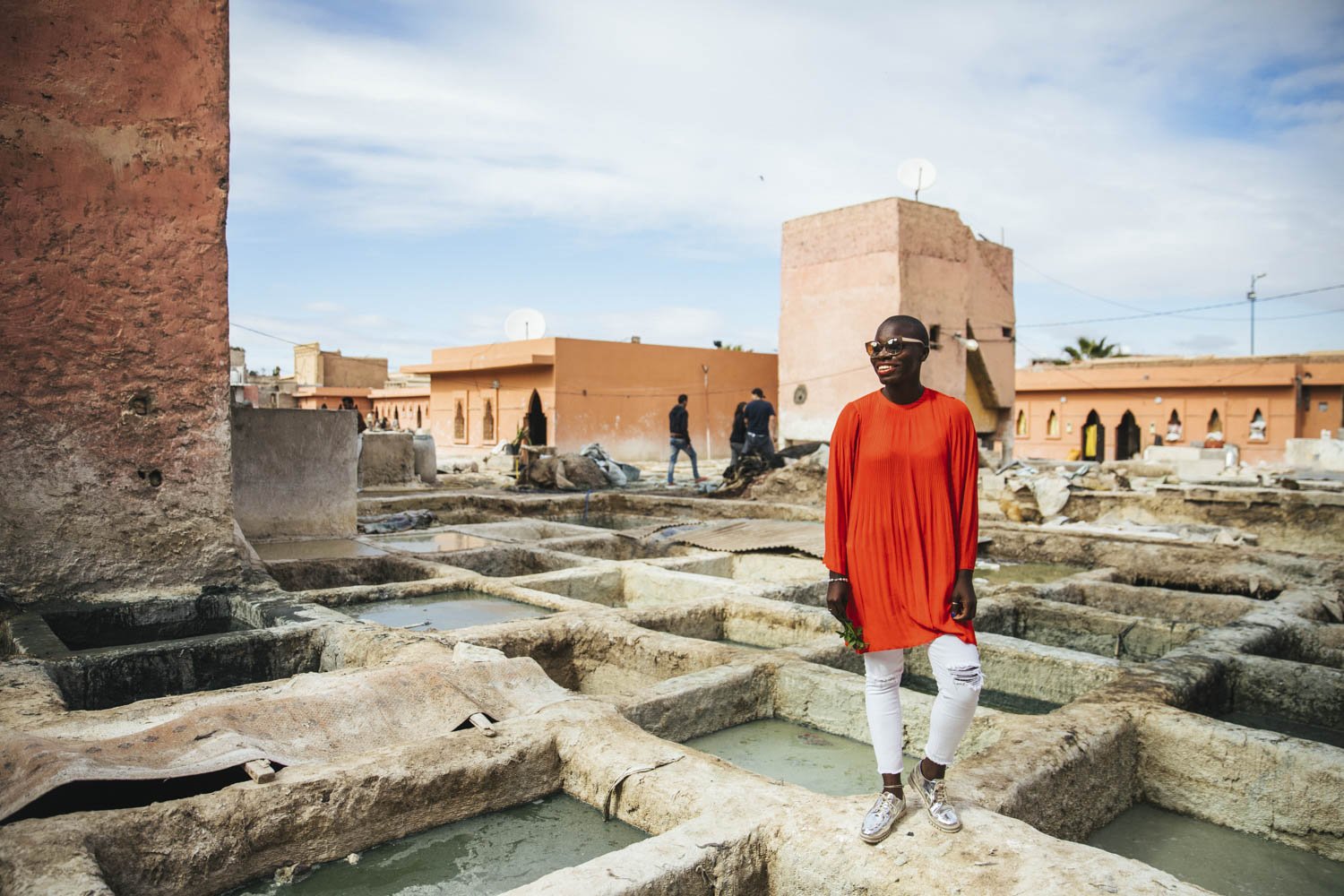 Don’t trust the photos on a hotel’s website when you can do this instead.

I use the geotag feature on Instagram—it’s my new method of checking out hotels. You find a hotel that has four or five stars, and you’re looking at the pictures on the website thinking, This is amazing. But I want to see what [guests] are posting there. When I was looking for hotels in Zanzibar, for instance, many of [the geotagged photos] didn’t look like their pictures on their websites at all. People had geotagged them, and I could see it wasn’t a very nice beach. 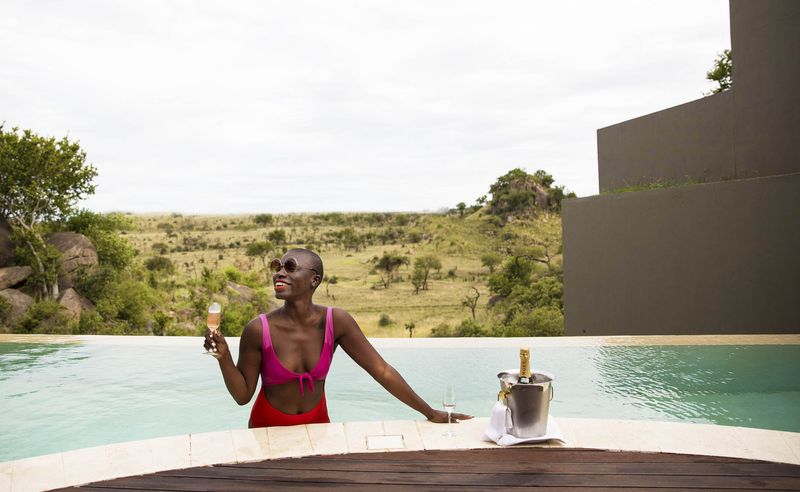 Checking on the geotagged Instagram photos from the Four Seasons Safari Lodge Serengeti in Tanzania will tell you what it really looks like. Photographer: Andre Perry.

You can always avoid checking your carry-on, even on a full flight.

On a recent trip I traveled between Kenya, Tanzania, Uganda, Djibouti, Qatar, and Bahrain with my handy-dandy Away bag. I love the way it rolls and charges my devices [with a built-in battery]. Depending on the region of the world you are in, [airlines] can be pretty strict about the weight of your carry-on bag, often asking to weigh it. Generally the maximum is 14 kilograms, or 30 pounds, which somehow for me is never enough. So when I approach the counter and they say I have to weigh my carry-on, and I know it’s too heavy, I say, “Actually, it’s camera equipment, so I can’t check it.” Airlines don’t want liability for electronic equipment. It works every time, even if they tell you to check it at the gate. And it is technically true, as I have a camera and a lens in there. It’s just the whole thing isn’t camera equipment.

How to fit two weeks’ worth of clothing in a carry-on.

The first thing I do before packing is write down a list of where I’m going, and I put in the climate as far out as I can tell [from weather reports]. I count up the number of days and count out my underwear to make sure I have enough. Then I lay out all my bottoms and my tops, then use Flight 001 spacepaks for them. They are absolutely the best thing on the market. I’ve tested them, trying to pack without them, and it doesn’t work. Using them, though, I can usually get two weeks’ worth of clothes to fit in a carry-on bag. I recommend the number 2, 3, and 4 models. And I use a long wallet from Flight 001’s T5 collection to keep my boarding passes and my passport together. 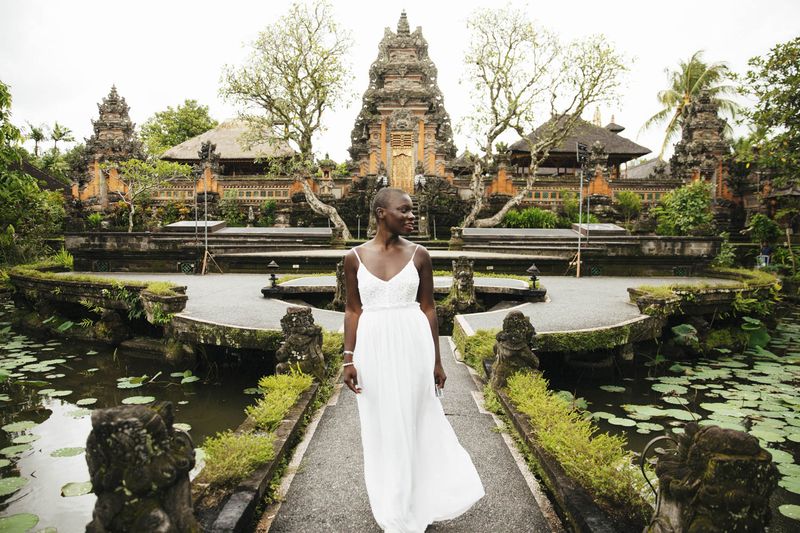 Nabongo says the best thing about Bali is that “every city is different. Ubud is all about relaxation and being one with nature. The energy is serene and calm, yet so very alive.” Photographer: Elton Anderson.

A two-point plan for scoring the best flight deals every time.

Every morning I read flight deals like they’re my New York Times: I check The Flight Deal, Secret Flying, and Airfare Spot. If there’s a place I haven’t been, I allow them to dictate where I travel next—like when I went to Bali, because I found a ticket for $450 from L.A. And Chase Sapphire Reserve is the best thing that’s ever happened to me; it blows the American Express Platinum card out of the water for anyone who calls himself a real traveler. It comes with a membership for Priority Pass, which is at over 1,000 lounges around the world. Sometimes, when I fly a small regional airline, it’s given me access to lounges in places like Kilimanjaro and Zanzibar. And the rewards system is insane. I have not paid for a plane ticket in four and a half months because of Chase. The annual fee is $450 per year, but you get a $300 travel credit every year, so if you charge a flight from New York to L.A? Boom! You get a $300 credit, so now the annual fee is really only $150. 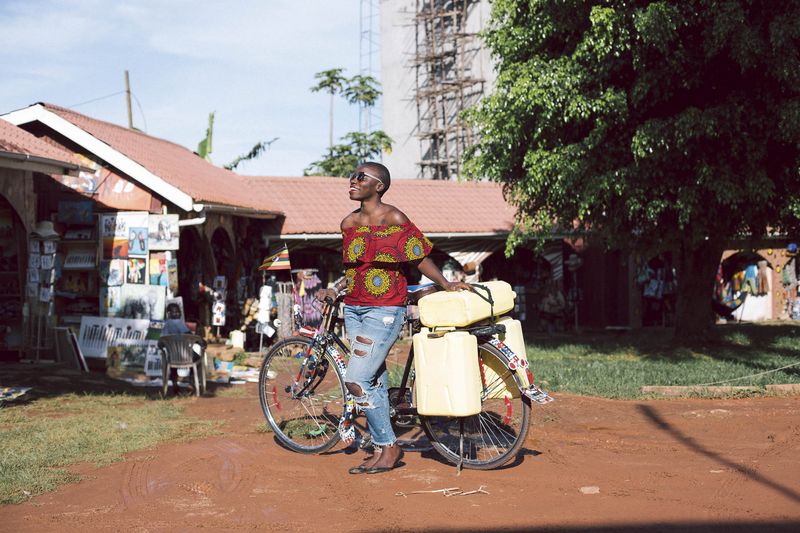 “When in Kampala, be sure to stop at National Theatre in the city center,” Nabongo says. “It’s my favorite place in East Africa for shopping. Visit my aunt in stall 14!” Photographer: Sarah Waiswa.

Where to shop in Africa.

I am obsessed with the National Theatre in Uganda [which also features local artists’ work], because your money goes so much further with the exchange rate of the Ugandan shilling to the dollar. If you’re going to Kenya, I highly recommend stopping in to Kampala on the way and going there: The craftsmanship is amazing, on everything from bags to serving utensils. I love walking around a city [in America] with one of the bags, which are practical and fashionable.

Embrace the rain—for the right reasons.

I always recommend traveling at the end of the rainy season. I’ve done this in East Africa, the South Pacific, and Southeast Asia. I just Google “rainy season” plus whatever country to find out. Most recently, on that trip to Bali, I went toward the end of the rainy season. The lodging is cheaper—I’d estimate around 30 percent cheaper, on average—and I love taking pictures without other people in them! I got lucky, as I spent two and a half weeks in Bali, and it rained the day I arrived but never again. And I always travel with this footwear: little hunter green ankle booties from J.Crew, which are easier to walk in [than knee-high Wellington boots], take up less room in your case, and are really cute. And I have a pair of bright yellow rubber Chuck Taylors, which are waterproof.

Take that, St. Barts or Ibiza. The best island you’ve never heard of? It’s in Africa. 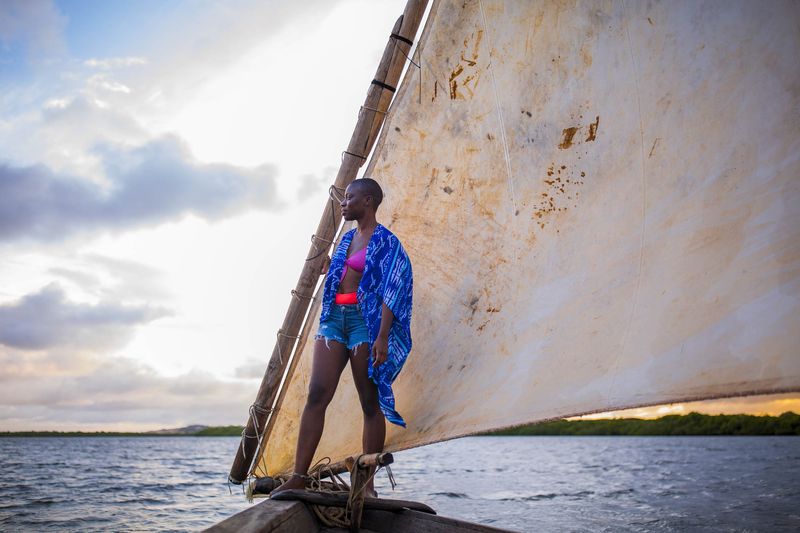 Nabongo says Lamu Island is one of Kenya’s best-kept secrets. “There is a lot of local tourism to the island, but most outside visitors travel to Mombasa and Diani. The food in Lamu is incredible, the people are super nice, and the sunset dhow boat rides can’t be beat.” Photographer: James Anthony.

Lamu is a quaint, quiet island off the coast of Kenya, which all my Kenyan friends told me about. It’s a short flight from Malindi, where most tourists go, and like much of the East African coast, it’s largely Muslim. I went during Ramadan, so it was extra quiet, very calm and peaceful. We stayed at Forodhani House, which is really good for a family or a group of friends. But if you want more of a hotel, try Majlis. The architecture and culture of the island is a mash-up of Swahili and Arabic influences. Like Zanzibar, it’s a spice island, dating back to the old trade between the Arabian Peninsula and India. So the best part of a trip there is the food—the best samosas I’ve ever tasted, and I grew up in a home eating a ton of Indian food, with a Ugandan mother who makes samosas. I already told her, “Mommy, you’ve got to rethink your recipe.”

How to chop onions without crying, wherever you are in the world.

When I graduated from the London School of Economics and Political Science, I spent an extended stay in Benin, working with a small Italian NGO. We were living about 250 kilometers from [the largest city] Cotonou, in one of the world’s poorest countries, so you can imagine what life was like. We lived with some nuns in a convent, because there was a cave nearby where people came for pilgrimage. The convent was the only place in that area with electricity and running water, but not hot water. One time, when I was cooking my own meal, I was struggling with chopping onions, and my eyes began to water. One sister, from Nigeria, handed me a matchstick and told me to put it between my teeth, flammable side out, and it would prevent my eyes from watering while cutting onions. To this day, I always put a match in my mouth when cutting onions, and it works like a charm.

By Lucius Gantt                   Almost every day someone is “banned” from a social media site. Black religious leaders, Black community activists and even some Black journalists are prohibited from different web sites, publications broadcast programs.

Did This Man Save His Life From Cop Who Had A Gun In His Face?

Edrick Truitt believes he almost lost his life when he was pulled over by a cop who had a gun to his face in Helena-West Helena, Arkansas. Thankfully, Truitt didn’t end up being a tragedy but the chilling moment was caught on tape.