The Rev. Robert Bowser, a U.S. Navy veteran, was among those applauding during the unveiling of a purple signpost on the side of Northwest Eighth Avenue in Gainesville for Veterans' Day. 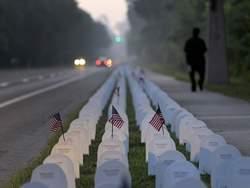 The sign on the post shows solemn figures looking over an endless collection of tombstones. It reads: “Memorial Mile. Established 2007. Veterans for Peace. Chapter 014.”

Bowser, 90, served in World War II and the Korean War before retiring at the start of the Vietnam War.

“It’s special because it’s recognition,” Bowser said of the city ceremonially renaming the stretch of the avenue between Northwest 23rd Street and Northwest 31st Drive as “Memorial Mile.”

“I can recall when there was no recognition given to service members,” he said.

On each Memorial Day since 2007, the Gainesville chapter of Veterans for Peace has placed a 12-inch ceremonial tombstone for every U.S. soldier who died in Iraq or Afghanistan, said Scott Camil, who founded the chapter in 1987 and serves as its president.

On each Memorial Day since 2007, the Gainesville chapter of Veterans for Peace has placed a 12-inch ceremonial tombstone for every U.S. soldier who died in Iraq or Afghanistan, said Scott Camil, who founded the chapter in 1987 and serves as its president.

Camil, 73, said he earned two Purple Hearts while serving as a sergeant in the Marines during the Vietnam War. He said he was inspired to place the tombstones after watching a documentary called “Arlington West” and seeing the public respond to a similar display.

“The film was very moving, and I saw how the public responded to the display,” he said.

Camil said he chose the stretch of Eighth Avenue because it is between two parks – Westside Park and Loblolly Woods Nature Park – and is “kind of a peaceful setting.”

Nearly 7,000 tombstones were placed this past Memorial Day, he said.

“We have used Memorial Mile to point out that politicians easily start wars but lack the courage to end war,” Camil said.

The chapter’s vice president, Douglas Bernal, who served two tours of duty in Iraq with the Army, said he proposed to City Commissioner Harvey Ward the idea of renaming part of Eighth Avenue.

“We’re very fortunate locally to have … a supportive community that really embraces this idea that peace isn’t partisan – it’s something that everyone deserves,” Bernal said.

Ward, who secured the City Commission’s official backing, said of renaming the street:

“It seemed like the sort of thing that was an absolute no-brainer for all of us.”

The purple markers feature the same design of the Memorial Mile T-shirts designed by chapter member Susan Hudgens, 60, whose husband is a Vietnam veteran. Hudgens said the design is literal, with grief front and center in the primary figure leaning over one of the markers.

“The face and fist are clenched because grief can be an angry business,” she said.

Earlier Monday, Gov. Ron DeSantis delivered a speech at JetBlue Park at Fenway South in Fort Myers. He thanked Vietnam veterans especially and aimed to make amends for neglect they have faced in the past, according to Naples Daily News.

“That was one of the low points in American history,” he said. “So I want to say, ‘Thank you, today.’”

“This city is graced with your presence,” Trump said. “This nation is forever in your debt, and we thank you all.”

Back in Gainesville, Crystal Bowser, 68, a retired child advocate, said the city and chapter’s recognition mirrors the appreciation her father, a former longtime minister in North Carolina, has received from people in Gainesville recently for his service.

“He said for years that never, ever happened,” she said.

Richard Hudgens wipes a tear from his eye as he stands in front of a booth along Northwest Eighth Avenue on Saturday afternoon.

He's wearing an American flag pin, and one given to him by the federal government.

He was enlisted in the Army in 1968 during the Tet Offensive, one of the largest military campaigns of the Vietnam War.

Now, his job is to protect the 6,789 tombstones that make up the "Memorial Mile," a mile of tombstones that symbolizes all the lives lost among service members during the wars in Iraq and Afghanistan.

He is in one of the two tents set up to help the public find their loved ones among the thousands of tombstones.

Hudgens is a member of the Veterans for Peace Gainesville chapter, the organization behind the Memorial Mile.

A retired worker from the VA, the Army veteran said he has been working with the Memorial Mile for the past eight years.

Woni Spotts: First Black Woman to Leave A Mark on Every Continent in the World

Many people dream of traveling around the world but only a few could really achieve that. But Woni Spotts has completed her goal of visiting every country and continent in the world, and she is the first Black woman to do so!

Dedicated to preserving and highlighting black history, a Knoxville-based initiative is on a mission traveling up and down the corridors of the “Mountain South” and unraveling a tangled but important past. Monday night, the PBS Black in Appalachia project came to Blount, set on adding energy to a conversation that is already thriving.

For years I have wondered what the value of Twitter is for sales and business. Everyone knows the indisputable value of LinkedIn for B2B sales, marketing, B2B prospecting, and entrepreneurs in general. But Twitter is finally gaining traction in B2B.