A couple seated at a high-top table smoked a joint, while six tourists in a circular booth nearby drank THC-infused beer and reviewed the flower menu. It was the morning of the Southern Paiute’s traditional hunt, when tribal youth learn to shoot

The Tudinu, or “desert people”, from whom the Las Vegas Paiute descend, have lived in southern Nevada for more than 1,000 years, spending summers in the mountains and winters by a valley spring until the area was taken over by white settlers. They worked as ranch hands for several decades, and in 1970, the Las Vegas Paiutes became recognized as a sovereign nation, after which they launched several businesses. 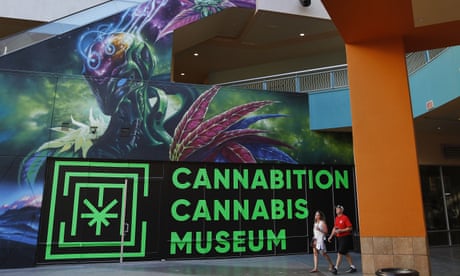 In 2017, they opened the NuWu Cannabis Marketplace, a glass-walled, big box structure that half resembles a car dealership. NuWu – which means “the people” in Southern Paiute – sits on the tribe’s “colony” one mile away from the neon-lit Fremont Street Experience.

Last month, NuWu became the go-to dispensary for many in Las Vegas, and not just because it’s the only one with a drive-thru window. NuWu opened Nevada’s first cannabis tasting room in October. Sovereignty exempts them from a law that restricts marijuana consumption to private residences until 1 July 2021.

On that date, Sin City will no doubt host the kitschiest, most glammed-out cannabis party scene in the world. A dispensary with “galactic scale”, Planet 13, already has a restaurant and cafe space inside its 112,000-sq-ft marijuana superstore near the Las Vegas Strip. But for the next 21 months, this 55-member Southern Paiute band has the pot lounge business all to itself.

“We laughed at first about it. Like, ‘oh crap, we’re going to be weed dealers?’” said Tso, who served as the tribal council chair for over 10 years. “After we got the jokes aside, we started digging into the numbers. It was just a different way to generate revenue for the tribe when we realized we needed to do something to put our people in better situations.

“Within a year and half this is going to compete with our other businesses,” Tso said of NuWu Cannabis Marketplace. “I think we’ve prolonged our tribe by three to four more generations.”

He noted that federal assistance for healthcare, education and law enforcement services has “dwindled” since the recession. In fact, a 2018 report by the US Commission on Civil Rights titled Broken Promises called the funding status for Indian country “grossly inadequate”.

“There are 560 some odd treaties between the US government and tribes, and none of them have been honored,” Tso said. “But with this business we’ve created, we’ll balance out some of those shortfalls.”

Located in a neighborhood with multiple cemeteries, tow yards and homeless shelters, the Southern Paiutes’ cannabis lounge is off the beaten path. But one afternoon last month, Jessica, a Las Vegas local, celebrated her 26th birthday by inhaling smoke from a dab rig that the bartender lit for her.

Dan, an accountant from Denver, ordered a bong hit. “This would be a great place to bring my folks,” he said. “They love to come to Vegas and throw convention out the window.”

Occasionally, NuWu has to cut people off. But overall the experiment has gone so well that two to three other Native American tribes visit each week to learn about the industry some are calling “the new new buffalo”, a reference to the term used for casinos when the Indian Gaming Regulatory Act passed in 1988.

In a city saturated with gambling, where even laundromats and grocery stores have slot machines, the Las Vegas Paiutes never saw the casino business as a viable economic driver. Their main revenue source since 1970 has been a tobacco store that sells tax-free cigarettes.

“The Paiute in an interesting way took advantage of this community that grew around them,” said Michael Green, a history professor at the University of Nevada, Las Vegas. “When you go to Las Vegas, you don’t take care of yourself, and casino culture, for locals who worked there, had a similar impact. You’re working all day with people smoking, drinking and sometimes making considerable money. That became hard to resist, and the Paiutes did well financially knowing there were plenty of smokers in this area.”

The strength and ingenuity they have used to survive centuries of marginalization has parallels to the Las Vegas Paiutes’ creation story, which states that their ancestors roamed the desert as ants until a great flood forced them to crawl up a mountain and ascend trees. When the water receded, they returned to the ground and became “two legs” – human beings – and an especially communal, hardworking sort.

“We do get teased because we’re city Indians, but a majority of us know our culture and that’s the point,” said Tso, whose arms are covered in tattoos of traditional Paiute symbols and tools. His community may need NuWu to be that mountain they climb in the event of a perfect storm, since the tobacco shop revenue plateaued years ago, right as healthcare costs rose to levels unmet by federal support.

Another challenge they face is a corporate invasion.

MedMen and other companies listed on the Canadian Securities Exchange now operate cannabis dispensaries near the Las Vegas strip. According to Dayvid Figler, an attorney who practices cannabis law in Nevada, “The old school Vegas people, the local cultivators, the mom and pops, etc, who were the sole people in the industry are either all gone or have changed their roles.

“From a business standpoint it’s a very volatile terrain,” he added. “You’re getting reports of $30m, $45m, $100m for the transfers of marijuana licenses from establishments within Nevada to these corporate entities that have ownership outside the state.”

The potential for crony capitalism in the Nevada cannabis industry was highlighted last month with the revelation that associates of Rudy Giuliani arrested in Donald Trump’s Ukraine imbroglio unsuccessfully tried to enter the Las Vegas cannabis market through max donations to Republican candidates for governor and attorney general.

The Las Vegas resorts, too, have a stake in the future of the cannabis industry. Acting as the ultimate power broker, the resorts killed a cannabis lounge licensing bill in the 2017 legislature arguing that any marijuana use drifting on to their properties might lead federal regulators to revoke their gaming licenses. This year, the resorts convinced the governor to impose a three-year moratorium on cannabis lounges, and the Las Vegas city council banned such businesses from operating within 1,000ft of any casino.

“In reality, [the resorts] didn’t want the competition. They’re hoping in two years marijuana will go legal federally, and then they can bring it inside the hotels,” said the former state senator Tick Segerblom, who wrote the failed cannabis lounge bill.

Having co-authored the agreement that allowed the Las Vegas Paiutes into Nevada’s cannabis industry, Segerblom (the rare politician with a pot strain named after him), took solace in their success. “The marijuana industry is dominated by white people, but along comes this tribe and just takes over. Of all the things I’ve done, this is the one I’m most excited about.”

“They have outdoor grows taking place in northern Nevada on reservations where hundreds of people haven’t had jobs in forever,” he added. “It’s a true minority group that’s been screwed over since Christopher Columbus, and it’s just fitting justice. I sleep well at night.”

Dr. John Warren Intergovernmental Affairs Contributing Writer The fake accounts set up in the name of over 3 million bank customers since 2002, and the lowering of the Wells Fargo Bank rating with the Office of the Comptroller of the Currency in the U.S. Treasury Department from “satisfactory” to “needs improvement”, has had significant consequences Read More…

Lamyrical Harris, a teenage mother and a high school senior student in Tennessee, has recently graduated as the valedictorian of her class. She was also offered over $1 million in scholarships from several schools. She achieved it all despite the challenges that come with being a young mom.

The Black church, among the most prosperous institutions in America, has long led movements for the spiritual, social and civic uplift of Black people. When the Rev. Dr. Martin Luther King Jr.