Across the United States, a renewed grassroots movement is fighting to fundamentally change the rules of healthcare. We have the opportunity to achieve universal healthcare and defend the right of all people to be healthy. But we will not win if we see this only as a fight over policy – we must also tackle corporate power. We must end corporate control of our health, especially when it comes to who gets care and who is left to die. And as with all progress that depends on breaking the rules and norms that enable corporations to profit from our pain, racial justice is an essential strategy for winning real change.

That couldn’t be clearer than in the case of HIV/Aids in America. If we cannot prevent corporate control over our government, and prevent corporate profiteering, we will never prevent HIV/Aids or end the epidemic that kills millions.

Looking at where we are today, it should be no surprise that the cure for the HIV epidemic has more to do with politics than science. Through taxpayer funding, US government research made PrEP (pre-exposure prophylaxis) a reality. PrEP is a prevention approach that involves taking a daily combination of drugs, reducing HIV transmission through sex by 99%. Though public funding should ensure public benefit, we see the opposite taking place. US government inaction on universal access – the result of corporate influence – has led to a very different kind of prevention: preventing access for the people who need PrEP and continue to contract HIV without it.

I am a Black gay man and I am on PrEP. It is covered by my insurance, which makes PrEP access a privilege of class rather than a matter of public health and freedom for everyone equally. According to research from the Centers for Disease Control and Prevention, more than 1 million people should be using the PrEP drug Truvada but currently aren’t – probably due to the cost. The CDC reports that 500,000 of those people are Black, while 300,000 are Latinx. That’s on top of the impossible choices millions of us (especially people of color) are already forced to make as drug prices continue to surge across the board – such as going without food to avoid going without medicine, or vice versa.

Raiding Black people’s bank accounts for life-saving treatments should not be a sanctioned part of a corporation’s core business model – allowing them to exploit the life-and-death reality of the drugs we need. HIV medications had always focused on treatment, but PrEP ushered in a new era of drugs focused on prevention. The focus of drug executives, however, has always been the same: money. Drug makers let us die because they believe we do not have the power to stop them from denying us the care and treatments we need. They know that banding together and raising our voice to demand justice requires overcoming an almost paralyzing stigma: about Aids, about sexuality, about gender identity, race, poverty and money.

The pharmaceutical company Gilead makes $3bn from Truvada annually. The generic is available in other countries for $60 per year, but Gilead has successfully blocked generics in the US in order to protect its monopoly and keep prices high. The result: Truvada can cost as much as $20,000 a year here.

We need to build a new kind of movement to stop Gilead and all the drug corporations that exploit us. That’s the role I hope the new Lower Drug Prices Now campaign will be able to play, if we can all rise to the calling. 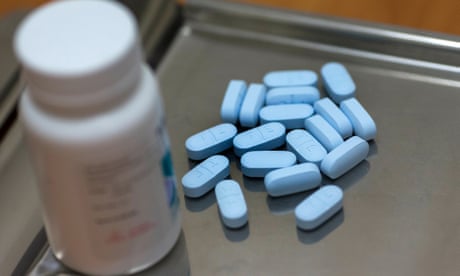 Gilead has turned to a familiar playbook to keep its monopoly. Like so many corporate “charitable” efforts, which I have written about before, Gilead regularly engages in publicity stunts such as “drug giveaway” announcements. These cynical public relations ploys do not address access for people of color, and they distract from us from Gilead’s profiteering. The US government recently sued Gilead for infringement of government-owned patents in addition to royalty back payments. (Though drug corporations don’t want us to know it, government funding contributed to every single one of the 210 drugs approved by the FDA between 2010 and 2016.) But the lawsuit approach is also about money, not access, and it fails to address the larger and more important issue of the corporate control of our lives.

When it comes to HIV, and when it comes to fighting for people of color who are systematically discriminated against in our healthcare system, often in the most unbelievably ignorant and harmful ways, we must think bigger and bolder.

Drug ads flood the air even more than political ads. They promote drugs that would not have been invented without public research funds, and would not be advertised without public airwaves. It’s about time they faced public pressure, and were forced to serve the public interest alongside their business interests. That begins with challenging their PR stunts directly, and forcing media platforms to reject promoting them.

Taking a movement approach, grounded in racial justice, would also include building the power to invoke the presently dormant Bayh-Dole Act of 1980, which grants the government “march-in rights” to manufacture and distribute critical drugs when the manufacturer fails to acknowledge the “health or safety needs” of consumers in their pricing and availability or engages in rampant price gouging to boost profits at our expense.

Democrats, Republicans and independents all want aggressive action. That is, the voters in those categories do. But too many of their politicians don’t. Instead, those lawmakers have sided with big pharma over their constituents.

The Elijah E Cummings Lower Drug Costs Now Act would give the government the ability to negotiate lower prices on hundreds of prescriptions for people covered under Medicare, and extend the lower prices to people with private coverage as well. The bill would also hold drug corporations accountable for charging patients more than the agreed-upon rate, regardless of their insurance plans. This would be an important first step toward a just approach. But drug lobbyists are spending millions to defeat it and the Republican leadership has already declared that the bill is going nowhere in the Senate.

We will not see real change until we are able to make the role of corporations in pricing something that is too toxic for politicians of any party to support. We must make supporting drug corporations a liability for politicians, rather than enabling them to serve as a financial engine for their campaigns. Then, we would see real action.

The Gantt Report – Ignorance and Trickeration

By Lucius Gantt But so far, I have not been persuaded. God gave me any media or journalism gifts that I have and all I try to do is use them. At this point in my life, I don’t want a million views, a million Likes or a million followers. I also don’t need any Read More…

He Foretold Trump’s Rise. Now This Self-Declared “Prophet” Is Hanging Around Trump Tower.