criticizing and trying to defame my friend Congresswoman Frederica Wilson and the family of Sgt. La David Johnson.

Instead of explaining how and why Johnson and three other soldiers were ambushed and murdered in the African country of Niger, the President 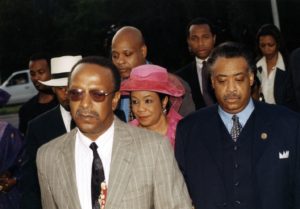 and his puppet of a Chief of Staff decided to divert the narrative by attacking an African American Congresswoman!

Rep. Wilson is not “wacky” as she was labeled by “Trumpty Dumbty”, she is a long time and tireless servant of the people. She started a well known mentoring program in Miami long before she became a member of Congress and has a history of working with community leaders, community activists and Black Nationalist Freedom Fighters!

The 2018 elections in America is predicted to have hundreds of women running for election to a variety of offices and that is good.

There are currently more Black males in public office than there are females but, from my vantage point, the cat’s got their tongue, literally and figuratively!

Where are they? I haven’t seen many of them defending and supporting Rep. Wilson, her cause and her dignity and her truthful description of Presidential disrespect of the wife and family of Sgt. Johnson.

I know for a fact that Black male elected officials know who Frederica Wilson is and they know she doesn’t lie but when she was called wacky and someone that fabricated a sacred conversation about the sacrifice made by a soldier she knew dearly, most Black men in public office were quiet as a church mouse!

Why? Perhaps it is because some were reluctant to speak because the Democratic Party hadn’t given them permission to speak. Maybe the silence was because their white political consultants and campaign managers told them to stay out of the fray. Or, could their inaction and lack of verbal response to attacks on a beloved female elected official be because they just didn’t have a vehicle to get their messages of support out to the public?

Well, Rep. Maxine Waters used social media immediately to voice her displeasure at the way her colleague was falsely accused. I guess Facebook accounts, Twitter accounts and other social media accounts of male elected officials were shut down except for personal posts.

I know you don’t like for me to write like this but not so long ago Adam Clayton Powell was not hesitant or afraid to talk about Black issues. Maynard Jackson, Harold Washington, Andrew Young, Julian Bond and even Marion Barry didn’t bite their tongues when it came to talking about issues of importance to Black America!

Just like Shirley Chisholm did in the past, today, women in elected office have no fear of the devils in the White House.

Wilson and Waters are not the only ones. Sen. Kamala Harris, D-California, is quick to point out when the President and others in government are dead wrong!

The Gantt Report is not scared either. Rep. Frederica Wilson has my full support. I’ve worked with her in the past, helped her in the past and will do whatever I can do to stand by her and support her in these days of government mismanagement and misrepresentation!

Holler at me Frederica. You know how to reach me.

You and the other females in elected office that stand up, speak out and tell the truth will always be my Wonder Women!   (Buy Gantt’s latest book, “Beast Too: Dead Man Writing” on Amazon.com and from bookstores everywhere. Contact Lucius at www.allworldconsultants.net. And, if you want to,“Like” The Gantt Report page on Facebook.)

Here’s what they really mean Is recreational marijuana legal in Orlando? If I have Alzheimer’s disease, can I apply for medical cannabis? And when can I start growing weed in my backyard?

How do we Safeguard the Grove?

Chapter 1: “Inmates Run This Bitch” Have you ever had a riot?” I ask a recruiter from a prison run by the Corrections Corporation of America (CCA). “The last riot we had was two years ago,” he says over the phone. “Yeah, but that was with the Puerto Ricans!” says a woman’s voice, cutting in. Read More…