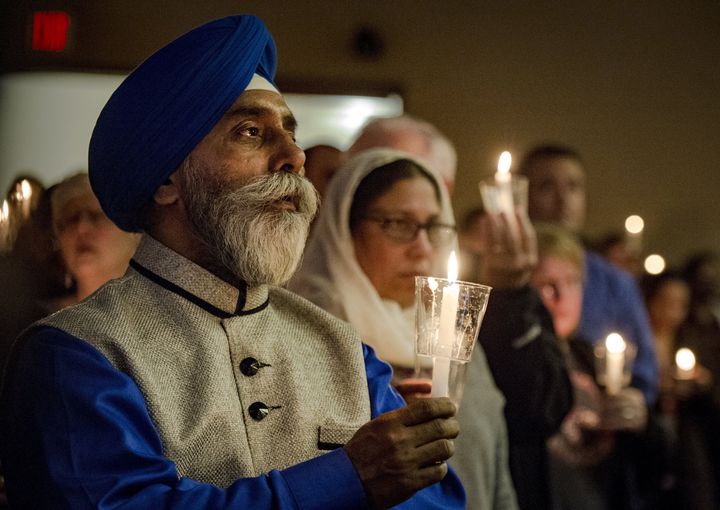 People of color are growing accustomed to imminent danger.

differently. I was 13 and it was after 9/11. My family was in New York City visiting my brother who lived there at the time, and we were walking down the street when a man with an Australian accent yelled “Hey, Bin Laden, go home” as his friend mimed playing a flute while shaking his head from side to side.

No one said anything as they laughed and walked past us. We actually pretended it didn’t happen, and later that day, I remember overhearing my mom nonchalantly mentioning to my dad that maybe they should consider moving back to India.

That day I learned two things: Being brown makes me a “bad” kind of different and America was not considered a permanent home for my family.

Since the election, moving out of the country is once again a prominent topic of conversation. My parents are looking into Canada’s immigration policies; they’re planning to renovate real estate in India just in case. My dad nonchalantly mentioned needing to learn to protect himself. When we talked about it, he listened to my argument for nonviolence, but his final comment struck me deep: “So you’d rather see me dead than be able to protect myself?”

Every single day I wake up with a sense of dread that something is going to happen to someone I love. The chances just keep getting greater.

My heart hurts that these are the conversations that take up my quality time with my family now – that every single day I wake up with a sense of dread that something is going to happen to someone I love. The probability keeps feeling greater.

Do we belong here?

Srinivas Kuchibhotla’s wife asked this very question in a Facebook post after her husband was shot by a man who yelled “get out of my country” in Kansas last week.

Do we belong here?

What is belonging, but a particular set of people who create a community that provides comfort, security and acceptance? I belong with my friends. I belong with the community my parents have been a part of in Virginia. I belong in my workplace.

Yet I was told to go home by an aggressive Trump supporter a few months ago and I was startled because I thought I was home.

America prides itself on being a melting pot of colors and faiths. This, along with the opportunity to excel, was reason enough for my parents to bring their two children to Virginia and have me here. But lately it feels like we’ve been naïve.

The fact that the Kansas incident didn’t produce so much more outrage or media coverage emphasizes to me that my family and I (along with other people of color, Muslims and targeted minorities) don’t matter. It took six days for the White House to even mention the attack. It’s outrageously disappointing. But it’s not new. People of color are being threatened or attacked or worse, killed, every day.

It reminds me of the boiling frog metaphor: When a frog is put into boiling water, it immediately jumps out, but if you heat the water slowly, it doesn’t perceive danger and thus is boiled.

Almost every day, I read or hear about a story of a minority being accosted or attacked. And as long as our government leaders are silent, and as long as we allow discriminatory rhetoric to go unchallenged in the media, hate will only continue to flourish. People of color are growing accustomed to imminent danger and living in fear of threats and attacks; before we know it, we’ll all be, or know someone, personally affected by this prevalent hate.

As long as our government leaders are silent, and as long as we allow discriminatory rhetoric to go unchallenged in the media, hate will only continue to flourish.

Just days after the Kansas shooting, an Indian man was shot dead outside his home in South Carolina and then days later, a Sikh man was shot in his driveway in Seattle.

Maybe this American melting pot is just a pot that has been heating up slowly and is boiling us like frogs.

Srinivas Kuchibhotla, Harnish Patel and Deep Rai represent people of color, minorities, my family, and my loved ones.

My brother, a turban-wearing Sikh man, is an ER physician at Duke University and just last week he had to deal with an Islamophobic patient who asked him if he was going to treat him differently because he was Jewish (and because he assumed my brother was Muslim).

My brother treated the patient with respect because the issue isn’t what faith he practices, but that people of color, Muslims and Sikhs are getting targeted and attacked for no other reason than appearances and preconceptions.

My reaction to this incident wasn’t shock. It was gratitude that it was nothing more.

It’s always been normal for my mom to call twice when she’s trying to get in touch with me, and usually it never indicates an urgent matter. But now every time she calls me twice, my heart pounds a little faster. Did something bad happen to my dad, or my brother? Do we know someone who was attacked or killed?

Republicans in Congress Are So Eager to Slash Food Stamps

Millennials Are Leaving Religion And Not Coming Back

Millennials have earned a reputation for reshaping industries and institutions — shaking up the workplace, transforming dating culture, and rethinking parenthood. They’ve also had a dramatic impact on American religious life.